Learning Objectives
In this lab students will:
- Follow the steps of the scientific method to observe, question and formulate a hypothesis.
- Utilize human senses to observe and record scientific observations.
- Design and prepare an experiment.
- Interpret and communicate results.
- Understand how laboratory equipment: hand lens, dissecting or stereoscopic microscope and scale can be used to extend human senses. 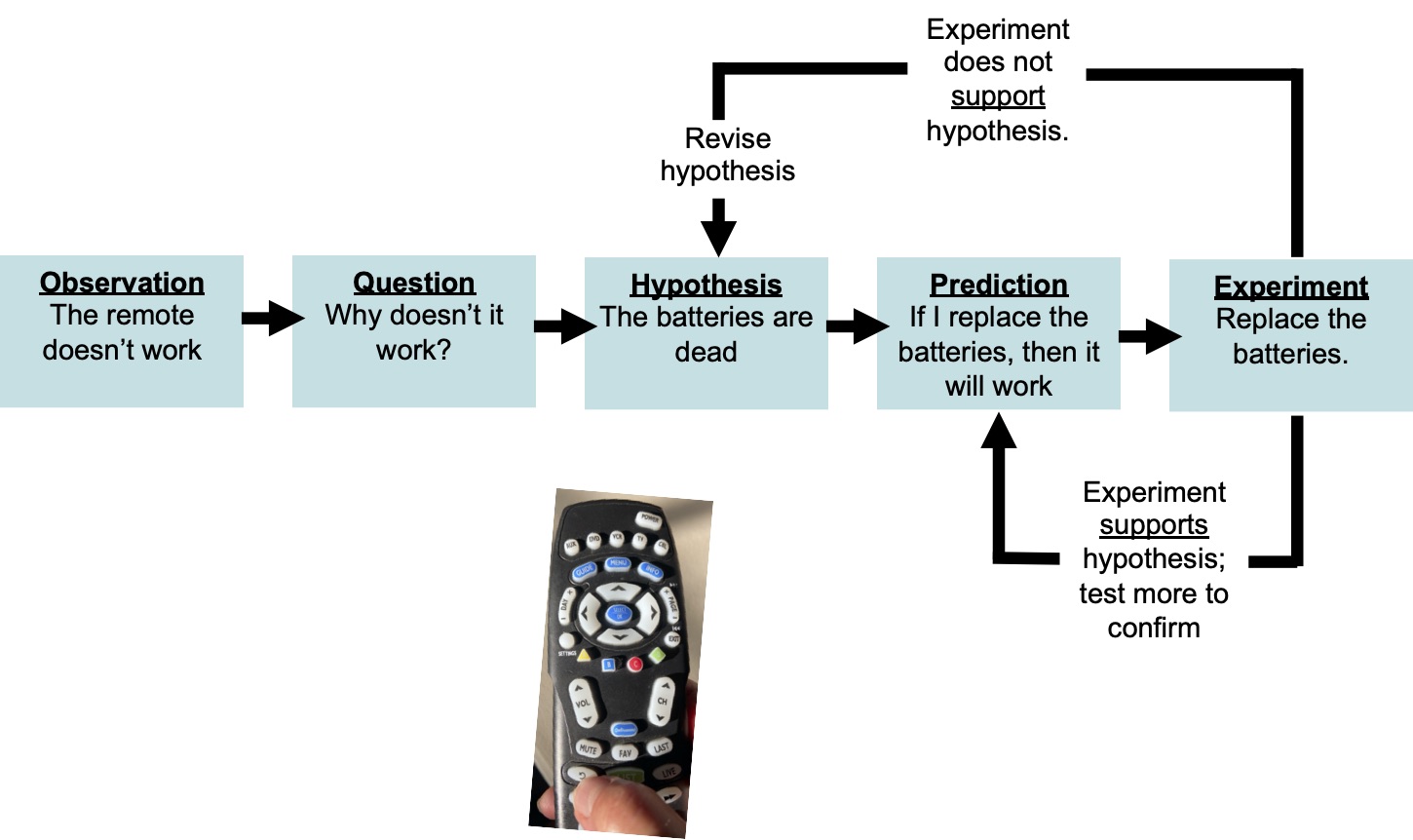 This is an example of applying the scientific method to a common problem.
NOTE -  if you change the batteries and the remote control now works you have not “proven” your hypothesis, you only have evidence to “support” your hypothesis.
‍
Consider this; what if the TV was unplugged (the real reason the remote control appeared not to be working). While you were looking around for replacement batteries your little brother came along, noticed the TV was unplugged and plugged it back in. Now you replace the batteries and the remote control appears to be working again – of course it was never not really working, the TV just needed to be plugged in. You THINK you have proven your hypothesis! After all, you changed the batteries and now it works. For this reason, scientists must repeat their experiment enough times so that by chance alone they would not have gotten the same results. 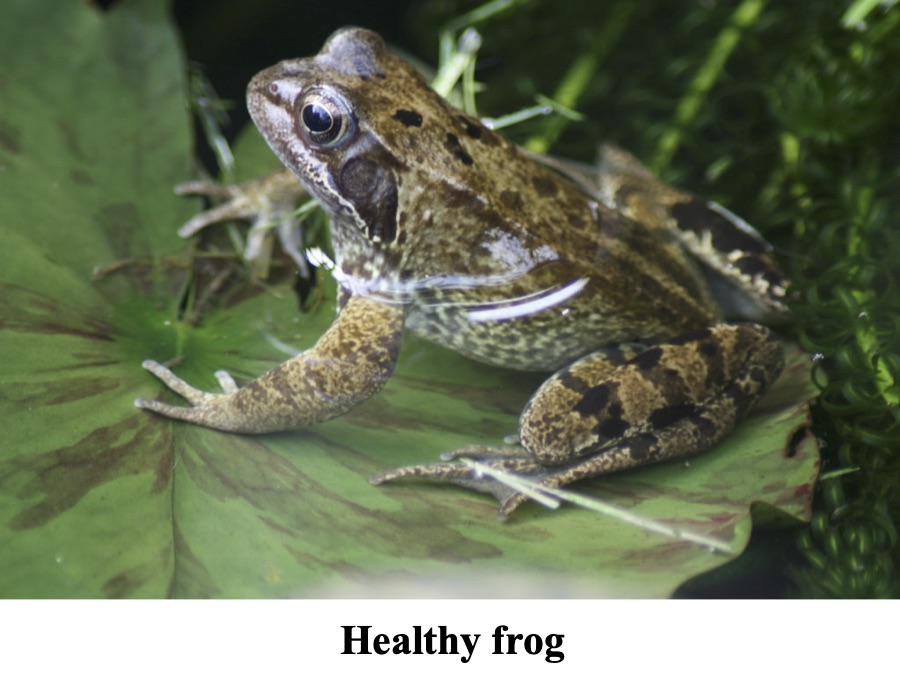 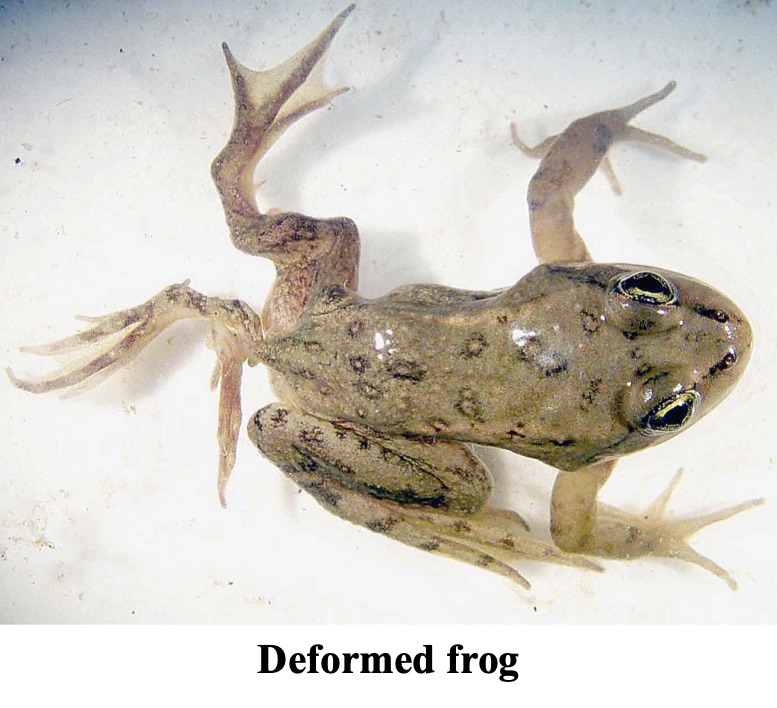 • Let’s look at another example of the scientific method being applied to solve a problem. This one started with school children visiting a local pond in Minnesota. They observed frogs with missing or misshaped limbs. An observation could be something new, never reported before, but often involves a new way of looking at things, or an astute realization that the natural world is at odds with the ideas that are currently accepted. The school kids on field trip in the 1990’s in Minnesota observed that many young frogs suffered deformities such as misshaped limbs, extra limbs, missing limbs. Authorities verified the discovery and extended it. Many additional ponds had frogs with deformities. Within a few years there were reports of similar deformities in 53 species of frogs in 46 US  states and 4 Canadian provinces. One investigator, Peter Johnson, an undergrad at Stanford University working with Dr Paul Ehrlich (a famous ecologist) became interested in this problem. Between 1996-1998 he surveyed 35 ponds in central California and found severely deformed pacific tree frogs in 4 of the ponds. It was on the frogs in these ponds that Johnson focused his attention. Efforts to find cause of frog deformities started with observations made by school children and spread to scientific community. Johnson's observations started with a large number of ponds, but his concern was eventually narrowed to 4 ponds. In science observations lead to a question.
Questions are at the heart of science. Some questions can be answered by experimentation or direct observation of the material universe. Scientists use observations and experience to ask how something happens, or why something appears to act as it does.
Initially Johnson asked what was the cause of the deformities in Pacific tree frogs in 4 specific ponds? This lead him to 3 possible hypotheses The search for the cause of the frog deformities centered on 3 possibilities;
1. Was it caused by a build up of chemical pollutants in watery environment in which they reproduced?
2. Could the deformities be related to degradation of ozone layer?
3. Could it be due to a parasite?
He ruled out chemicals quickly. Some ponds were free of them and had deformed frogs, others had pollutants and no deformed frogs. The ozone issue would effect all ponds, so he could rule that out too.
Johnson did observe a certain kind of snail in these ponds with deformed frogs and these snails were know to carry parasites. 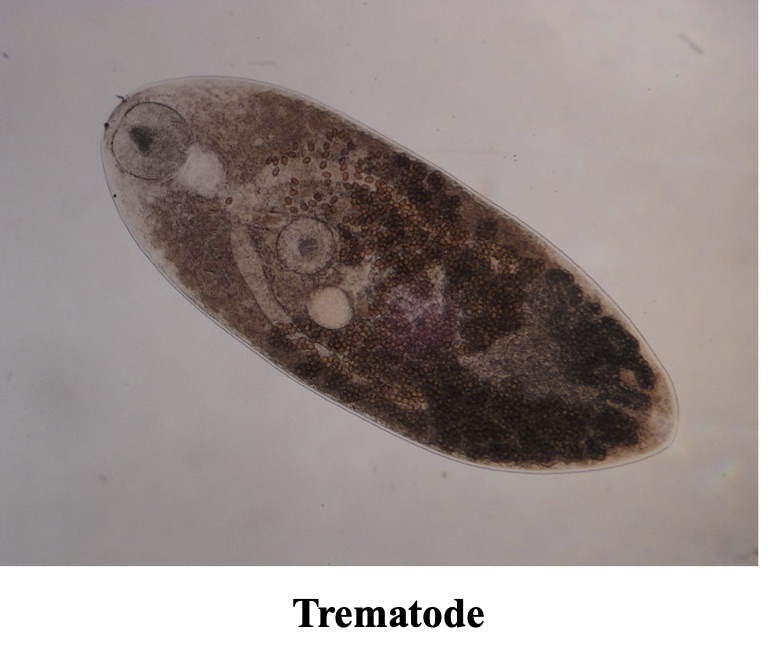 These snails were an intermediate host to a trematode (greatly magnified and pictured here). They are a kind of parasite. Could they be the culprits?
A hypothesis is a conjecture, a possible answers that is on trial. We have a set of set of assumptions when we formulate a new hypothesis. First, we accept that the world is a real place that can be studied objectively. Secondly, we believe that the world is neither chaotic nor dependent upon a metaphysical or supernatural realm. Those that depend on factors outside the material world cannot be tested and as such are not considered scientific. Third, we believe that the events and phenomena of material world have causes. Understanding causes means understanding why the world is the way it is and not some other way. Fourth, is a principle of scientific ideas that the simplest explanation that adequately accounts for all the observations is to be preferred over other more complex explanations (Occam’s razor). Guided by these assumptions we make hypotheses that can be tested. Hypotheses are always tentative and remain so until rigorously tested and found to be consistent with both original observations and usually many new ones. Peter Johnson was probably not consciously aware of these criteria for hypothesis formation when he initiated his investigation. Nonetheless, his hypothesis fit the criteria.
Are trematodes causing deformities in Pacific Tree Frogs in 4 ponds in central California? NOTE – if an explanation can not be tested it is simply not discussed in science. Since you can not TEST the existence of god, or ghosts or fairies, they are not discussed in a science class. This does not mean they don’t exist. It just means they will not be discussed in a science class. Perhaps one day there will be a way to test for their existence! 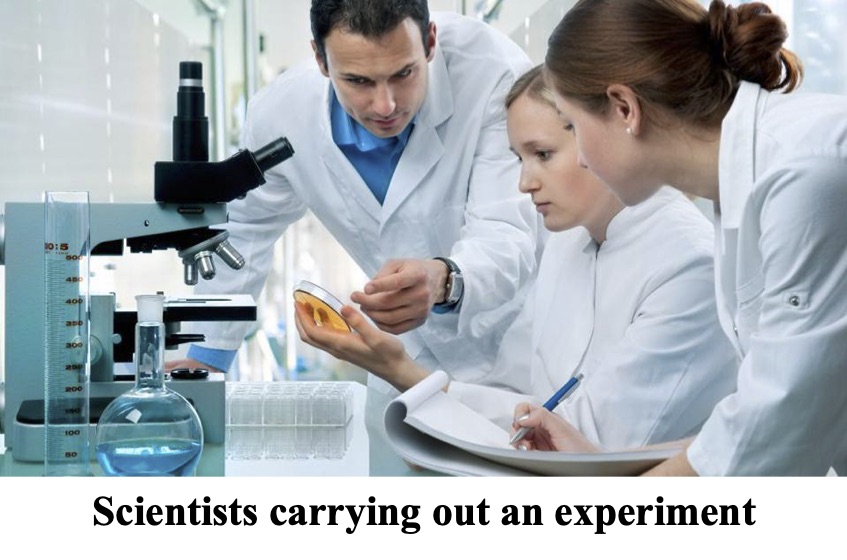 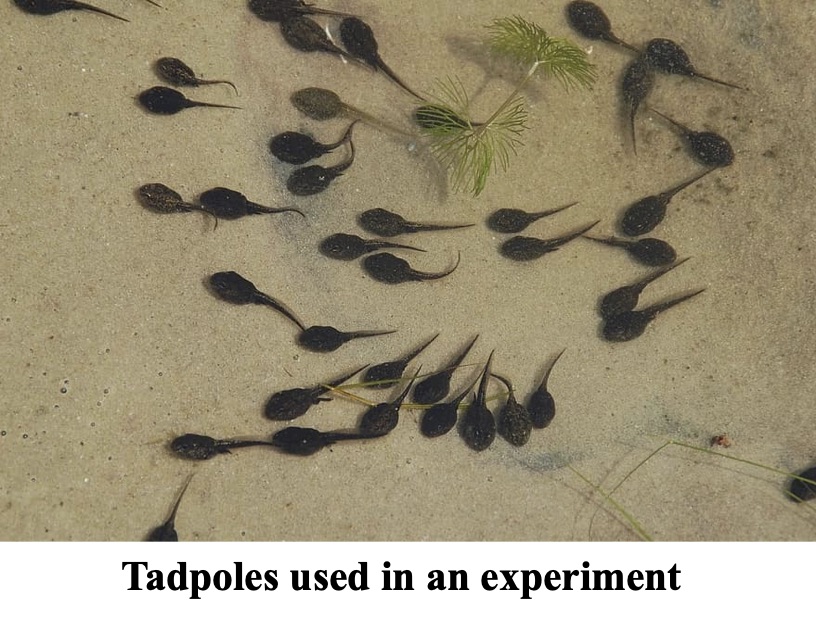 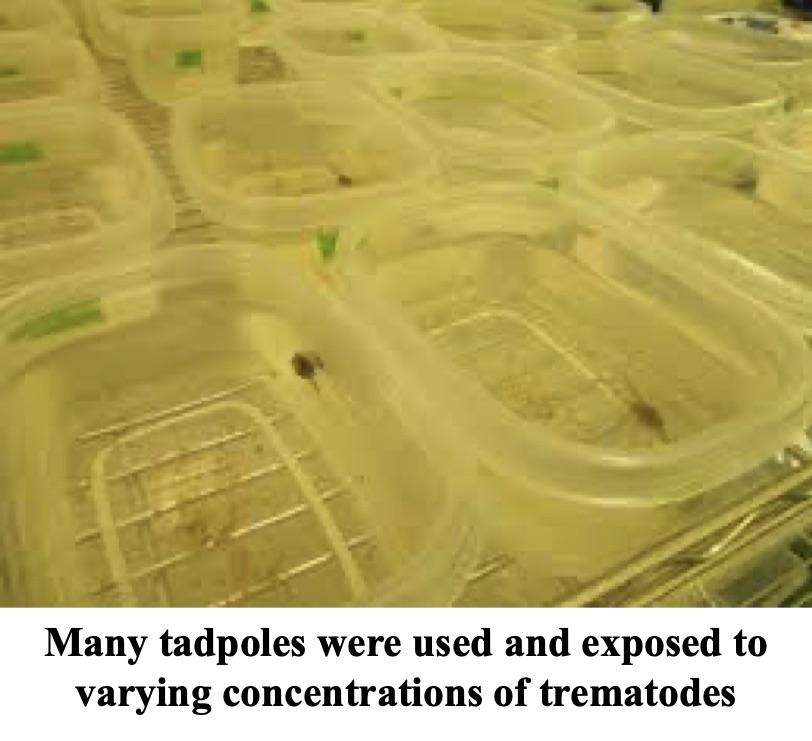 The next step in the scientific method is testing.
• Scientists perform tests or experiments to determine the accuracy of their hypothesis.
Most non-scientist usually imagine the work of science starting here in the testing phase. It is the activity that occupies most of a working scientist’s time.
Testing begins when a scientist makes predictions related to a hypothesis. These are logical predictions within the context of a given hypothesis given “such and such” a constellation of factors (the controlled experiment) then “such and such” outcome can be expected (If this, then that). Example –IF the batteries in the remote control are dead THEN when I replace the batteries the remote control will work. If the outcome under these controlled conditions is different from that predicted, then the hypothesis is not supported and may not be accurate. If the outcome matches the prediction, then the hypothesis is supported and its validity comes a step closer to being accepted. This usually requires many successful tests before scientists are willing to accept the validity.
Johnson tested his hypothesis by dissecting hundreds of affected frogs and found trematodes clustered around malformed limbs. This is good indirect evidence. Then he collected hundreds of frogs from sites where frogs were unaffected,  returned to lab, hatched and raised them in individual containers. He also collected parasites from the study ponds (parasite emerge late at night from snail hosts to find frog hosts so he had to go at night to these ponds). Johnson then exposed tadpoles to varying concentrations of parasites and waited to see what happened. These were his results: Those tadpoles exposed to no parasite had no deformities. Those tadpoles exposed to a low concentration of parasites often did have deformities. Those tadpoles exposed to higher concentrations of parasites had more defects.

• Explanation – is a hypothesis that has passed the widest and most comprehensive series of tests. It is a mature hypothesis and is still subject to review and consideration.
It may be elevated to a theory - a well demonstrated principle.   Unfortunately, the common use of the word “theory” differs from the true scientific definition. When people state they have a “theory” they are really referring to a hypothesis. A theory is a well established principle and is no longer on trial. There is no higher level than theory! And YES – evolution is a theory!!!! Just like gravity is a theory! Species really do change over time!

Components of an Experiment

Other things that need to be taken into consideration when setting up an experiment and reporting the results include;
• The Representative sample size – this is is how many individuals were tested or how often the experiment was repeated. Doing the experiment once on only 3 tadpoles is not a good experiment. By chance alone the tadpole exposed to a high concentration of parasites could have been resistant to the parasite or the tadpole in the control group could have had a genetic defect that caused deformities. Johnson's experiment had many (50) tadpoles in each group. Additionally, he did the experiment multiple times to see if he got similar results. This reduces the probability that by chance alone you could got a certain results.
Example – If I toss a coin once and it comes up heads can you state with certainty that I do (or do not) have a trick coin with 2 heads? No you can't. Even if I toss is 2, 3 or 4 times and it comes up heads each time this could happen by chance alone. But, if I toss that coin 50 or 100 times and it comes up heads EVERY time. You can state with certainty that I have a trick coin with 2 heads!

• Data analysis - The process of inspecting, cleaning, transforming, and modeling data with the goal of discovering useful information, suggesting conclusions, and supporting decision making. Data analysis involves converting many individual bits of information (raw data) into a graph, percent, or chart, that is easy to look at and see the results.
Johnson likely took the results of many experiments in which he counted the number of deformed frogs in each group (his raw data) and presented it in a bar graph or a line graph showing clearly that when there was no parasites there were no deformities and with an increasing concentration of parasites there was an increase in the number and severity of the deformities.
‍

We are going to focus on the first step of the Scientific Method in this lab - observations.
• An observation can involve any or all of our senses.
• Tools can be used to extend the senses and enhance observations.
• Here you will use your senses, as well as tools, to record scientific observations of members of the citrus family.

Study the figure below to become familiar with the anatomy and of a citrus fruit.

• The outer part of a citrus fruit (commonly called the rind) is called the pericarp.
• The pericarp is composed of 3 layers:
• The exocarp - the outer-most layer. It contains oil glands and pigments that give the fruits their distinctive colors when ripe. This layer is composed of specialized cells that protect the ripened fruit. During ripening, the green pigment known as chlorophyll breaks down and unmasks accessory pigments called carotenoids, which as the name implies, reflect orange and yellow wavelengths of light.
• The mesocarp - located in the middle of the pericarp and is often white. The cells in this layer are meristematic, which means they are replicating and producing new cells.
• The endocarp - the inner-most layer. It separates the fruit into segments, each of which is filled with juicy pulp. Usually referred to as the juice vesicles. This layer protects the seeds contained within each segment. Septa are thin partitions between the fruit segments
• When you are asked to describe the EXTERIOR of the fruit you should refer to one or more of the layers of the pericarp.
• The INTERIOR of the fruit consists of the juicy pulp or juice vesicles. The sweet sugar filled pulp is usually a lure for animals to eat the fruit and thereby disseminate (spread) the seeds.
‍