Learning Objectives
In this lab students will:
- Describe photosynthesis, including the substrates and products of the light dependent and light independent reactions (also called the dark reaction).
- Understand the principles of chromatography.
- Design an experiment to determine factors that affect photosynthesis.
- Understand how a spectrophotometer is used to measure the absorption spectrum of a leaf extract.

Watch this video to learn about photosynthesis. 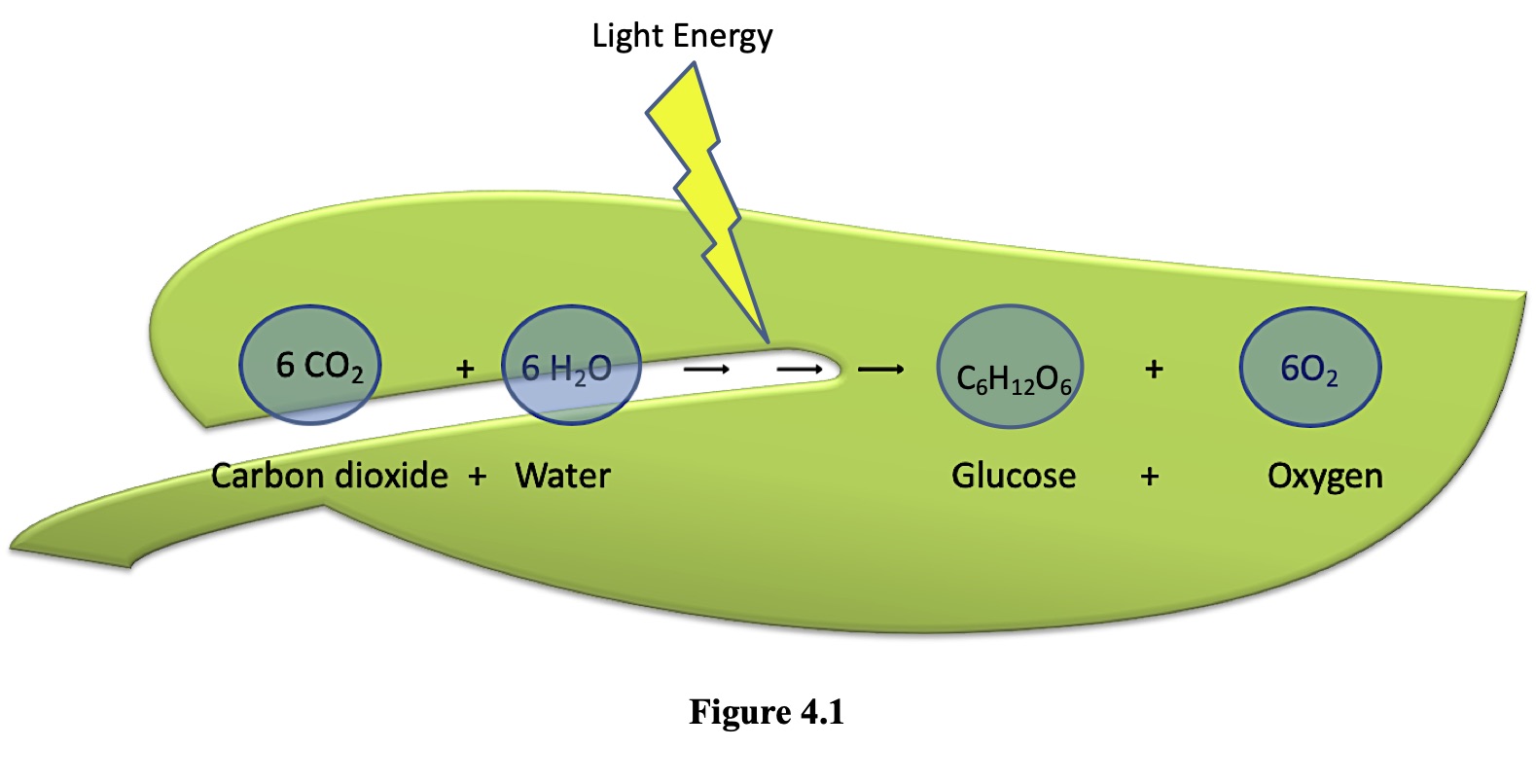 The type of reactions that occur during both photosynthesis and cellular respiration involve the transfer of electrons from one molecule to another. These type of reactions are called oxidation-reduction reactions or redox reactions for short.
• These reactions involve the loss of one or more electron from one molecule and the gain of those electrons by another molecule.
• When an electron is lost the reaction is called an oxidation reaction.
• When an electron is gained the reaction is called a reduction reaction.
• The acronym LEO GER (stands for Loss of Electrons is Oxidation/ Gain of Electrons is Reduction) can help you remember this.
• The word "oxidation" sounds like the word "oxygen" for a reason. The original definition of oxidation was used to describe a molecule that gained oxygen during a reaction. Here is an easy way we can follow Redox reactions in biological systems;
• If a molecule either gains oxygen and/or loses hydrogen it has been oxidized.
• If a molecule either gains hydrogen and/or loses oxygen it has been reduced. 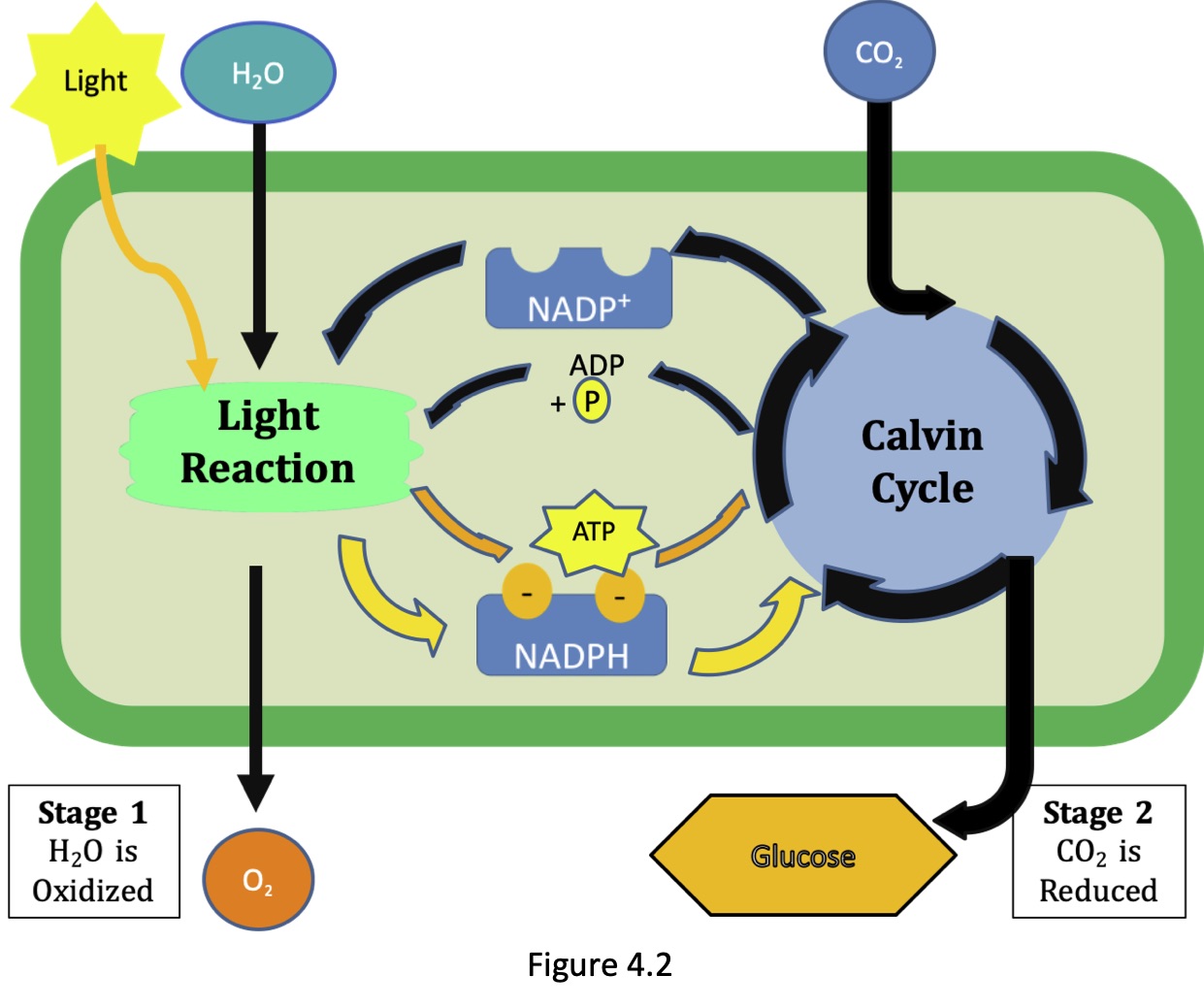 Photosynthesis occurs in two stages.
• Each stage involves many steps. In the first stage water is oxidized (it loses hydrogens and gains electrons). In the second stage carbon dioxide is reduced. (it gains hydrogens and loses electrons).

Stage 1 - The Light-dependent reactions - • These are the oxidation reactions. They are a series of steps that require sunlight to energize the chlorophyll pigments, and split the water molecules to begin the process.
• Sunlight is captured by pigment molecules in the thylakoid membranes of chloroplast.
• Chlorophyll is the  main photosynthetic pigment.
• Plants contain other pigments as well. This helps them gather more wavelengths of light.

Stage 2 - The Light-independent reactions, (AKA - The dark reactions or The Calvin Cycle).
• These involve the the reduction of CO2 to glucose.
• These are a series of reactions do not directly require sunlight.
• They do indirectly rely on energy captured and converted during light reactions.
• Plants contain enzymes that allow them to fix carbon directly from the air and convert them to sugars.
• Jan—Baptista van Helmont (discussed in Lab 1) did not know about this part of the photosynthetic process.
• Figure 4.2 shows the two stages of photosynthesis. Both stages occur in an organelle called chloroplasts.

The Nature of Sunlight and Spectrophotometry 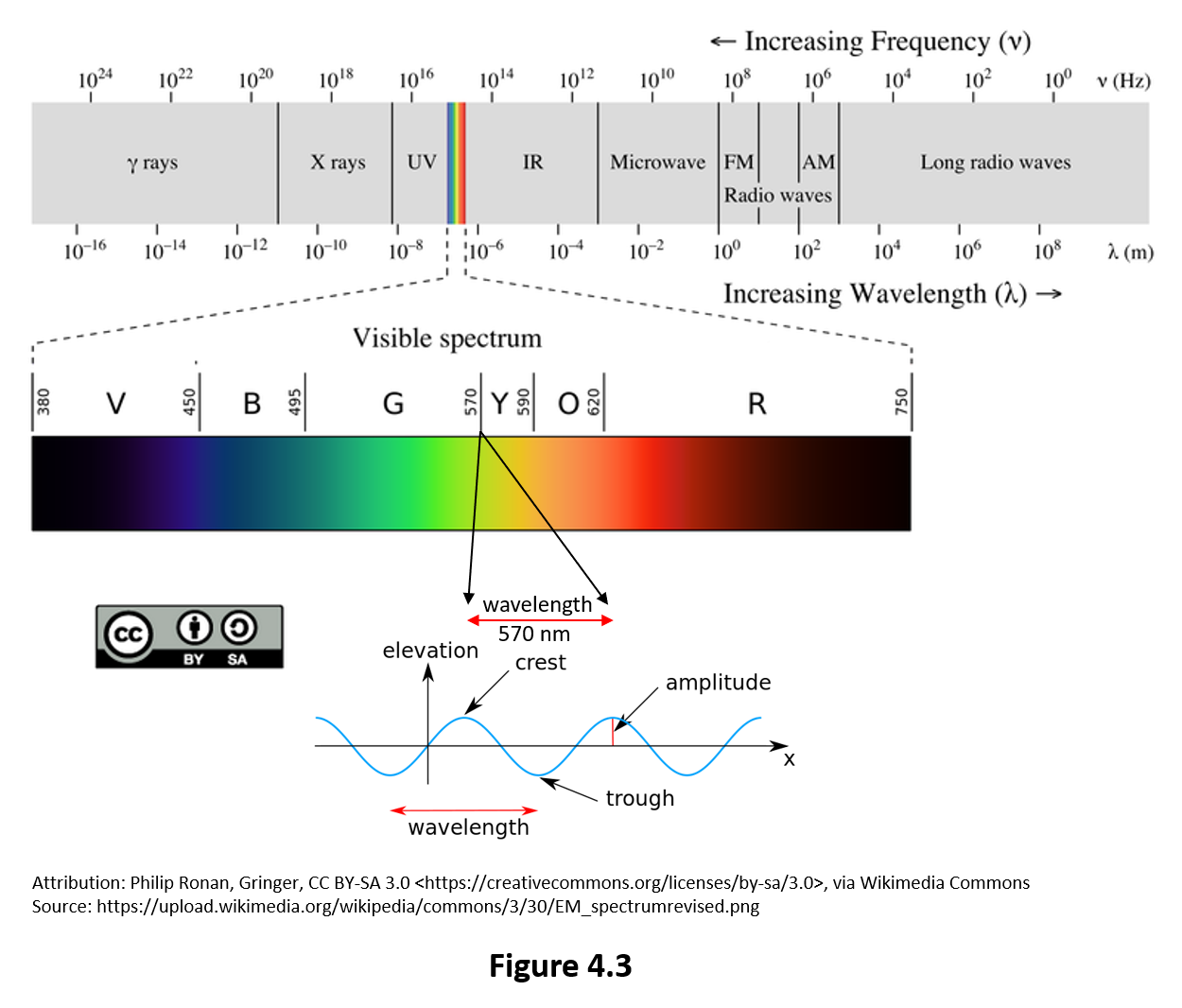 • Sunlight is a type of energy called radiation, or electromagnetic energy.
• The distance between the crests of two adjacent waves is called a wavelength.
• The full range of radiation is called the electromagnetic spectrum.
• Figure 4.3 shows the spectrum of electromagnetic energy for solar light.
•  Notice that the visible spectrum, that part of the spectrum that our eyes can detect it a tiny fraction of the solar light spectrum!
• Within the visible spectrum the human eyes are good at differentiating subtle color differences but we are unable to quantify those differences.
• Spectrophotometry is a method that can quantify the amount of light able to pass through colored solution.
• Light that is not absorbed by the solution passes through it and is compared to a "blank" in which all light passes through.
• The amount of light that comes through the solution relative to the blank is the transmission (measured as % of light)
• The light that is absorbed by the solution is the absorption.
• Both are measured in optical density (OD) units.

Chromatography -is a technique used to separate molecules from a mixture.
• It uses two phases for separation;–A stationary phase (paper) and a mobile phase (solvent).
• Molecules in a mixture will move at different rates based upon their affinity for either the stationary phase or mobile phase.
• Here, pigments extracted from a bean leaf will separate via Paper Chromatography into the four distinct pigments discussed above.
• In paper chromatography the paper is the stationary phase while the solvent is the mobile phase.
• There are a variety of solvents that can be used. Here we used a solvent with 9 parts petroleum ether: 1 part acetone.
• If we used a different solvent the pigments would separate, but would come out in a different order since they separate based upon their affinity for the solvent.
• The Relative front (Rf) is the distance traveled by each pigment from its original location relative to the distance the solvent traveled.
Rf = distance traveled by a pigment/distance traveled by the solvent.
• Watch the video to learn how Paper Chromatography is done and how to calculate an Rf value.

Measuring the Rate of Photosynthesis