Procedure
Part A:
Where does the mass of a plant come from?

• Re-watch this video to recall where people think the mass if a plant comes from.

• Recall from the video you just watched, and from Lab 1, that Jan—Baptista van Helmont’s hypothesis was that the mass of a plant comes from the soil.
• Was his hypothesis correct?
NO!
• Look back at the equation for photosynthesis. NOTE soil is not part of the equation!
• So most of the mass must come from either the water or the Carbon Dioxide. 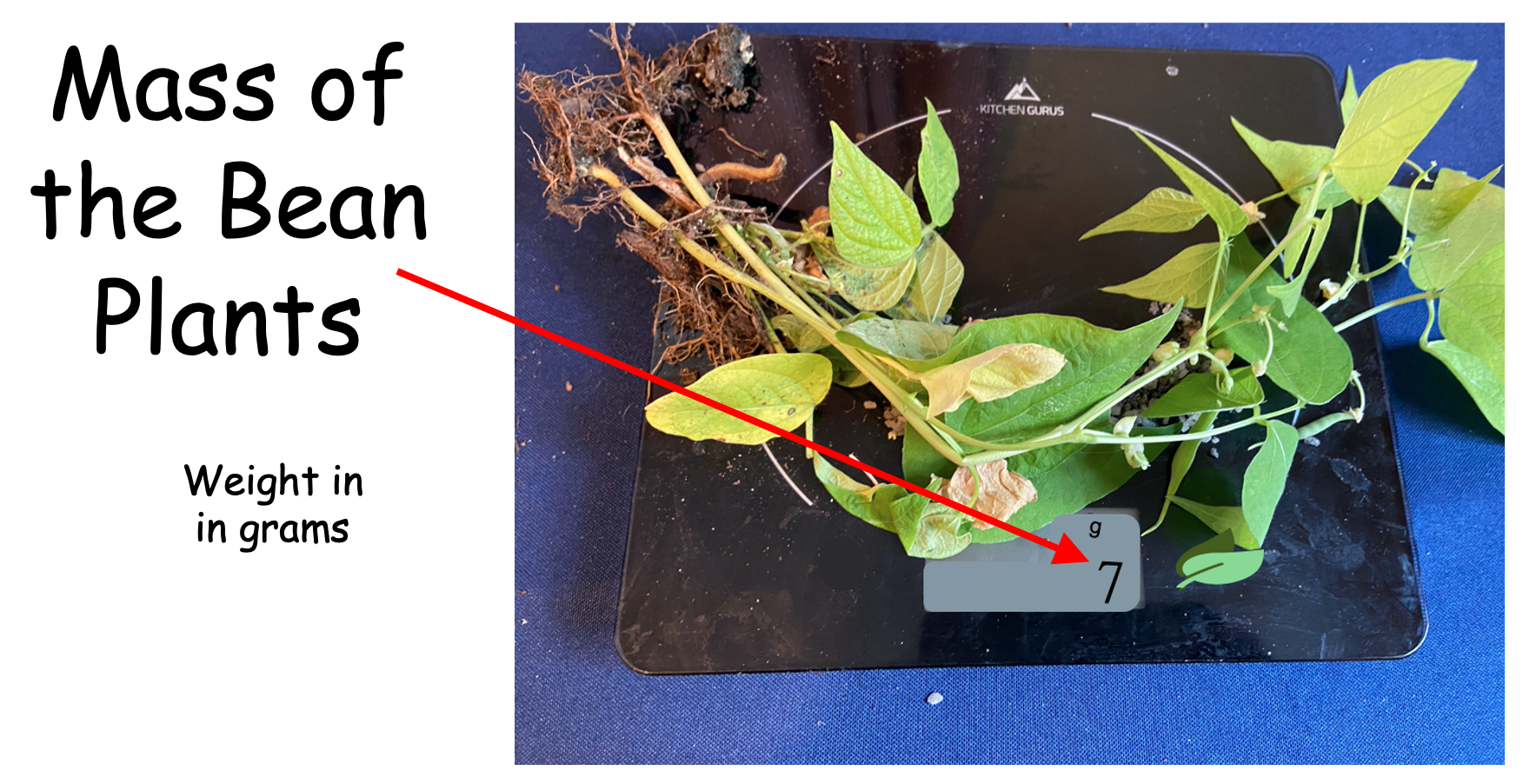 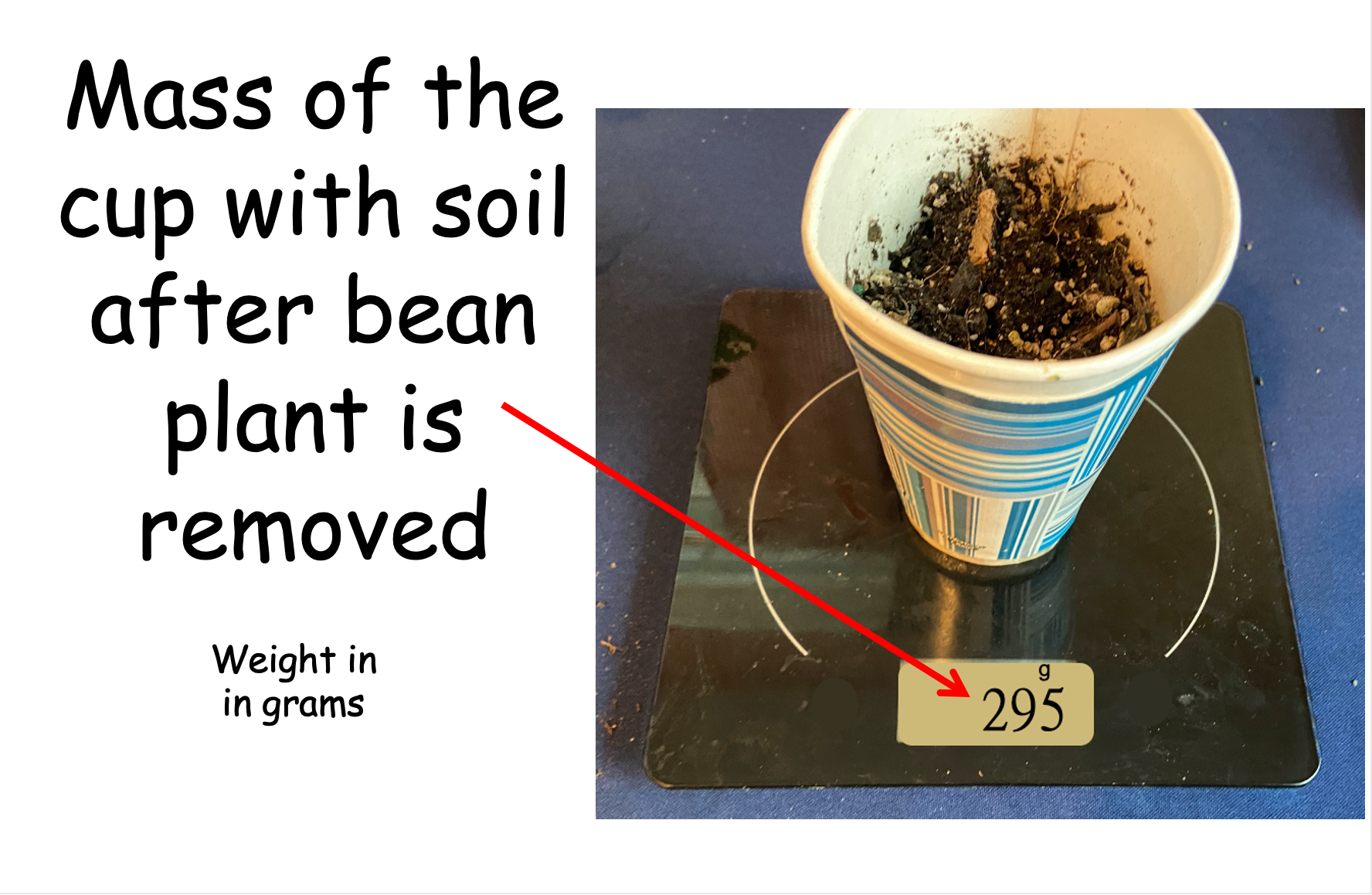 Chromatography -is a technique used to separate molecules from a mixture.
• It uses two phases for separation;–A stationary phase (paper) and a mobile phase (solvent).
• Molecules in a mixture will move at different rates based upon their affinity for either the stationary phase or mobile phase.
• Here, pigments extracted from a bean leaf will separate via Paper Chromatography into the four distinct pigments discussed above.
• In paper chromatography the paper is the stationary phase while the solvent is the mobile phase.
• There are a variety of solvents that can be used. Here we used a solvent with 9 parts petroleum ether: 1 part acetone.
• If we used a different solvent the pigments would separate, but would come out in a different order since they separate based upon their affinity for the solvent.
• The Relative front (Rf) is the distance traveled by each pigment from its original location relative to the distance the solvent traveled.
Rf = distance traveled by a pigment/distance traveled by the solvent.
• Watch the video to learn how Paper Chromatography is done and how to calculate an Rf value.

It takes awhile for the pigments to separate from each other while carrying out a Paper Chromatography experiment. The Pigments are often difficult to see. Watch the Paper Chromatography simulation here. Be sure to watch the entire simulation to see the four pigments and see the solvent front appear. Then return to this page.
Use the image that appears in the lab manual after the simulation ends to answer Question In Part B in  Lab 4 Lab Report. 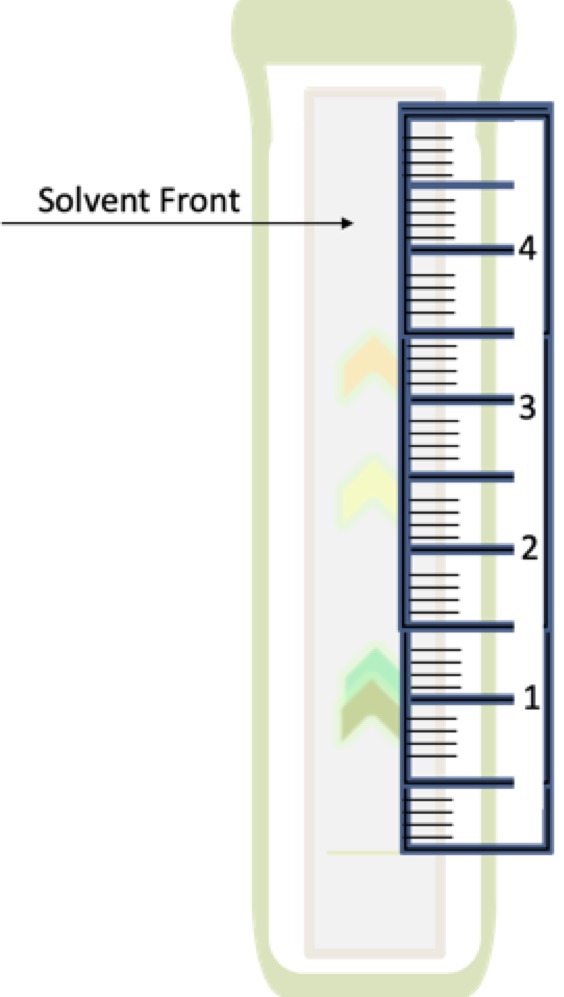 • The visible spectrum, that part of the electromagnetic spectrum that our eyes can detect it a tiny fraction of the solar light spectrum.
• Within the visible spectrum the human eyes are good at differentiating subtle color differences but we are unable to quantify those differences.
• Spectrophotometry is a method that can quantify the amount of light able to pass through colored solution.
• Light that is not absorbed by the solution passes through it and is compared to a "blank" in which all light passes through.
• The amount of light that comes through the solution relative to the blank is the transmission (measured as % of light)
• The light that is absorbed by the solution is the absorption.
• Both are measured in optical density (OD) units.
• Figure 4.4 shows a graph of the absorption spectrum for Chloroplast Pigments.
• Use Figure 4.4 to answer questions 27-28 in your Lab 4 Lab Report. 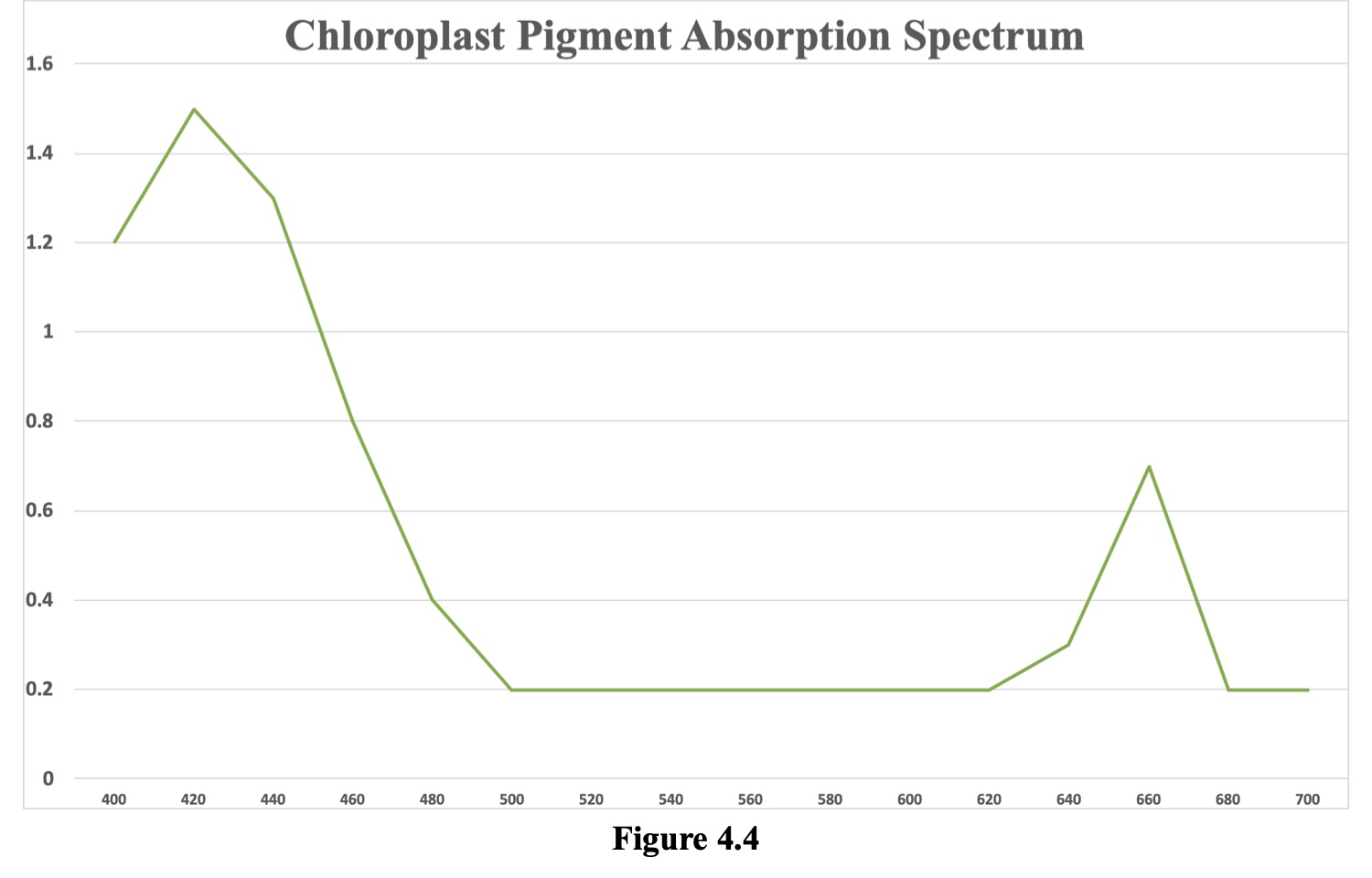 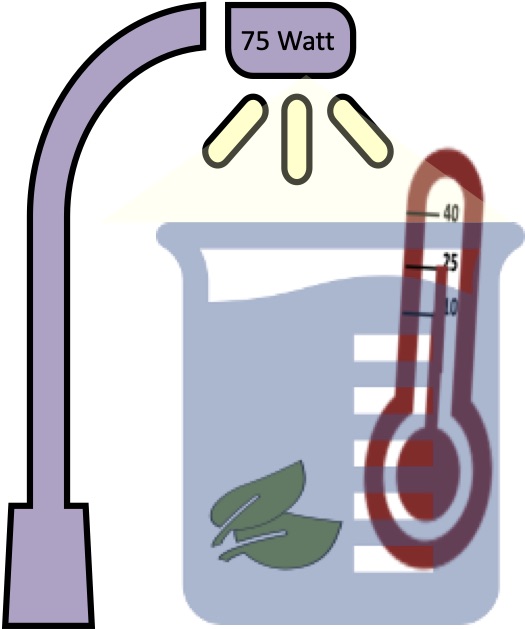 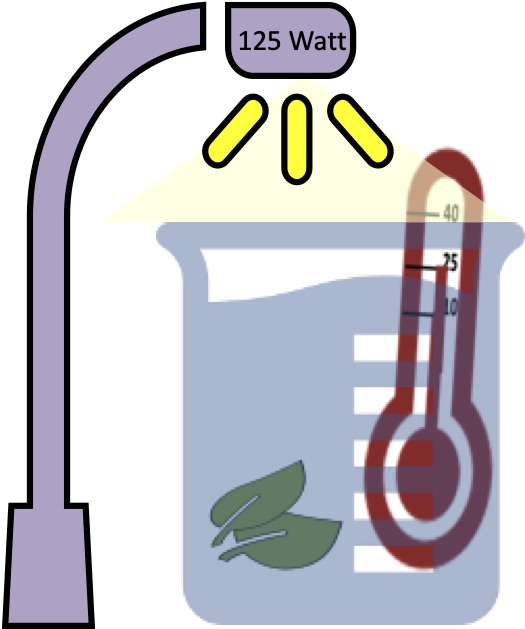 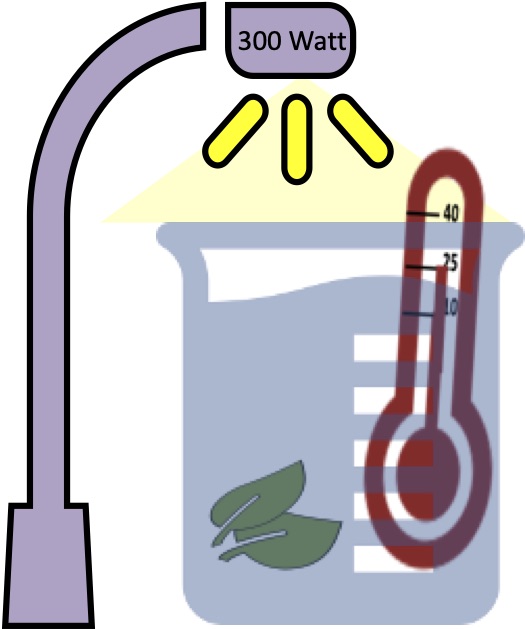 • All of the above experiments were carried out at 25˚C.
• Notice that the rate of photosynthesis was the most rapid when the 300 Watt bulb was used. Therefore we will use this wattage for the next part of the experiment.
• Design an experiment by adjusting the temperature of the water the Elodea is in.
• Come up with a hypothesis (recall from Lab 1 that this is a testable explanation) BEFORE you carry out the experiment.
• Make a prediction about what will happen to the rate of photosynthesis when you EITHER increase the temperature to 40˚C OR lower it to 10˚C (recall from lab 1 that a prediction should be worded something like "If ____ then ____".
• You do NOT need to watch both simulations, select one based upon your hypothesis and prediction. You will then compare the results of this experiment to the results for the 300 Watt bulb at 25˚C.
• Answer remaining questions in Part D in Lab 4 Lab Report. 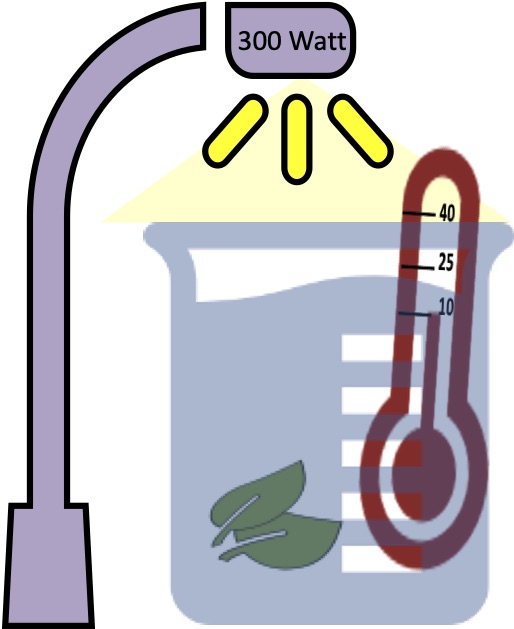 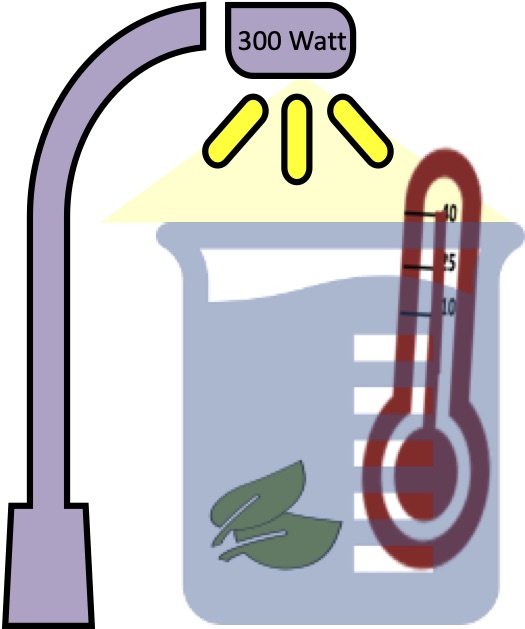