Procedure
Part A:
Where does the mass of a plant come from?

During lab 1 you designed an experiment and for several weeks your bean plant has been growing. In this exercise you will examine your results, collect data, and form a conclusion.

1. In Part A of your Lab Report record your planted seed's original mass from Lab 1.
2. Carefully remove the plant from the soil, making sure to return all the soil that is attached to the roots to the cup. If you lose some soil while removing your plant, or leave some of the roots behind consider how this will impact your results.
3. To remove any weight from the moisture in the soil, the plants have not been watered for several days. If your soil is wet, consider how this will impact your results.
4. Record the mass of the plant using the triple beam balance.
5. Record the mass of the dry soil using the triple beam balance (remember to subtract the mass of the cup).
Complete Part A of the Lab Report.

Chromatography -is a technique used to separate molecules from a mixture.
• It uses two phases for separation;–A stationary phase (paper) and a mobile phase (solvent).
• Molecules in a mixture will move at different rates based upon their affinity for either the stationary phase or mobile phase.
• Here, pigments extracted from a bean leaf will separate via Paper Chromatography into the four distinct pigments discussed above.
• In paper chromatography the paper is the stationary phase while the solvent is the mobile phase.
• There are a variety of solvents that can be used. Here we used a solvent with 9 parts petroleum ether: 1 part acetone.
• If we used a different solvent the pigments would separate, but would come out in a different order since they separate based upon their affinity for the solvent.
• The Relative front (Rf) is the distance traveled by each pigment from its original location relative to the distance the solvent traveled.
Rf = distance traveled by a pigment/distance traveled by the solvent. 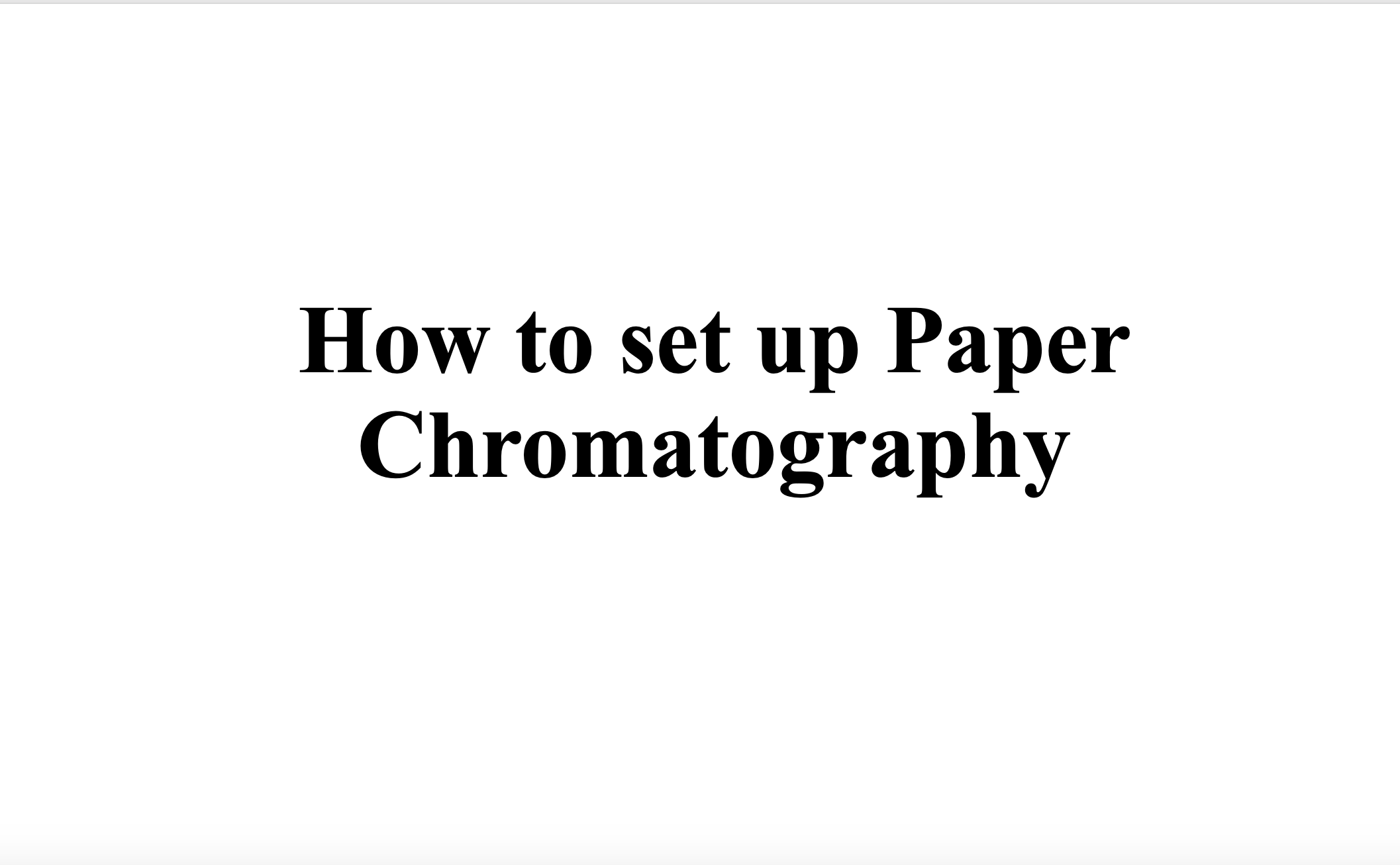 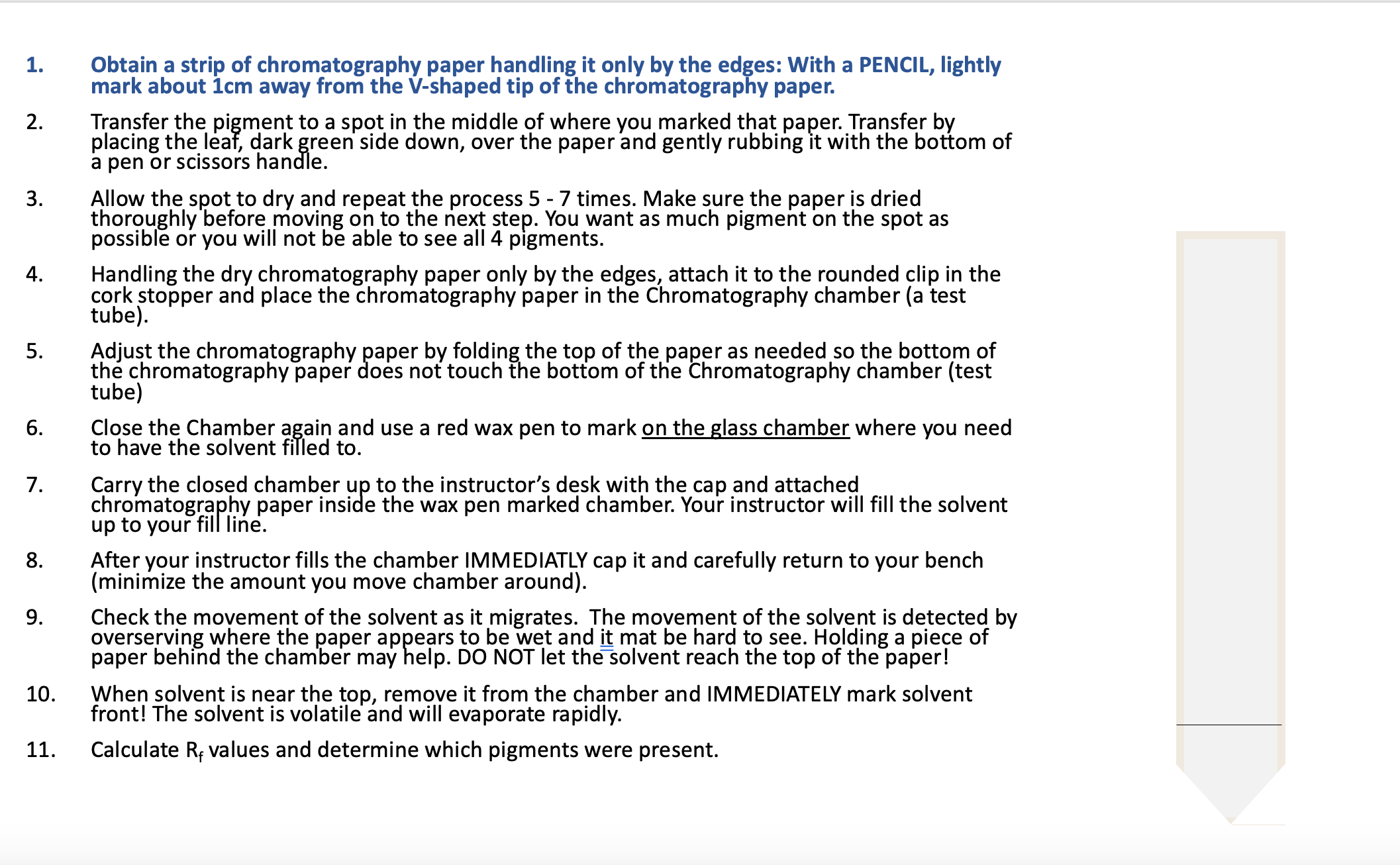 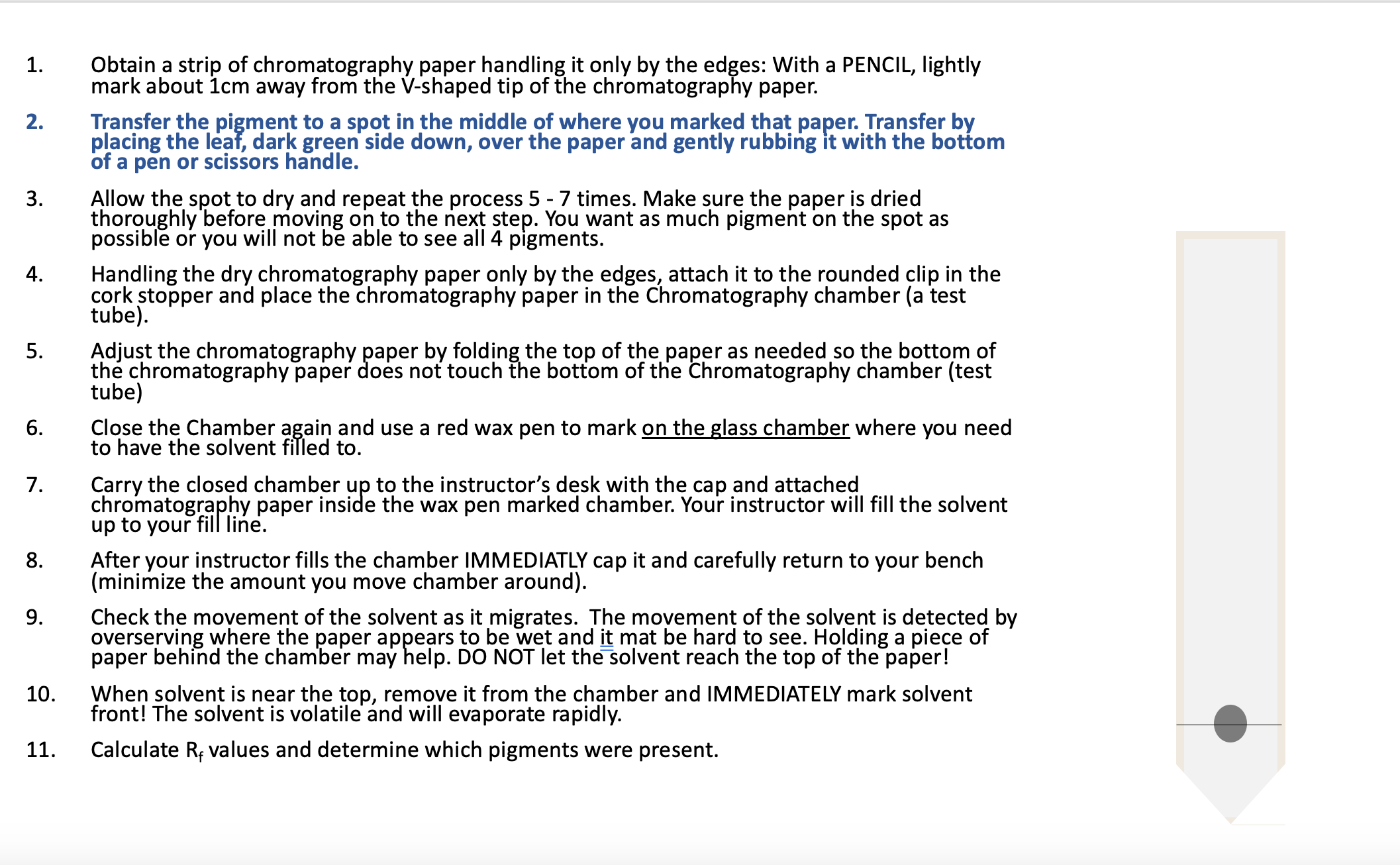 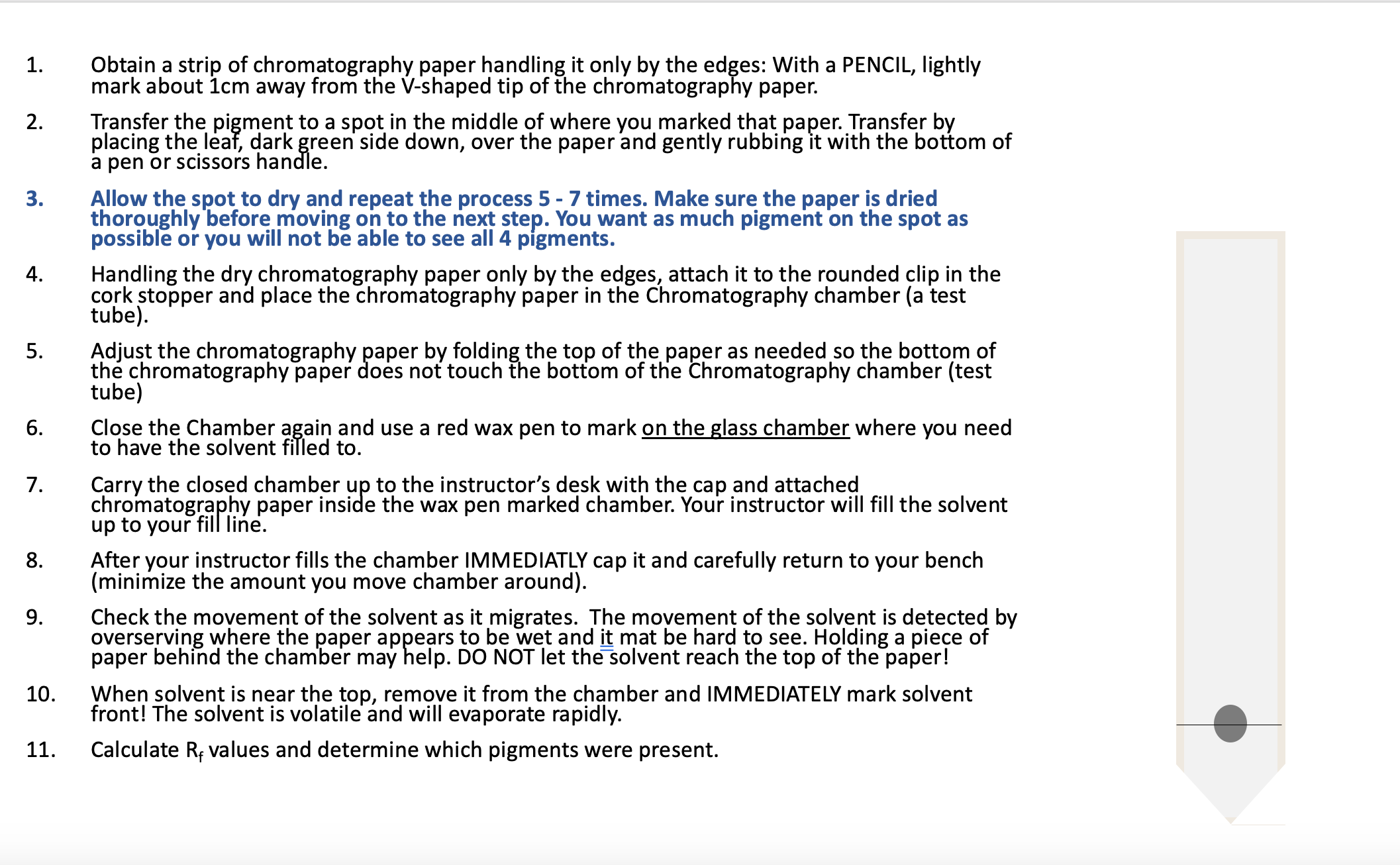 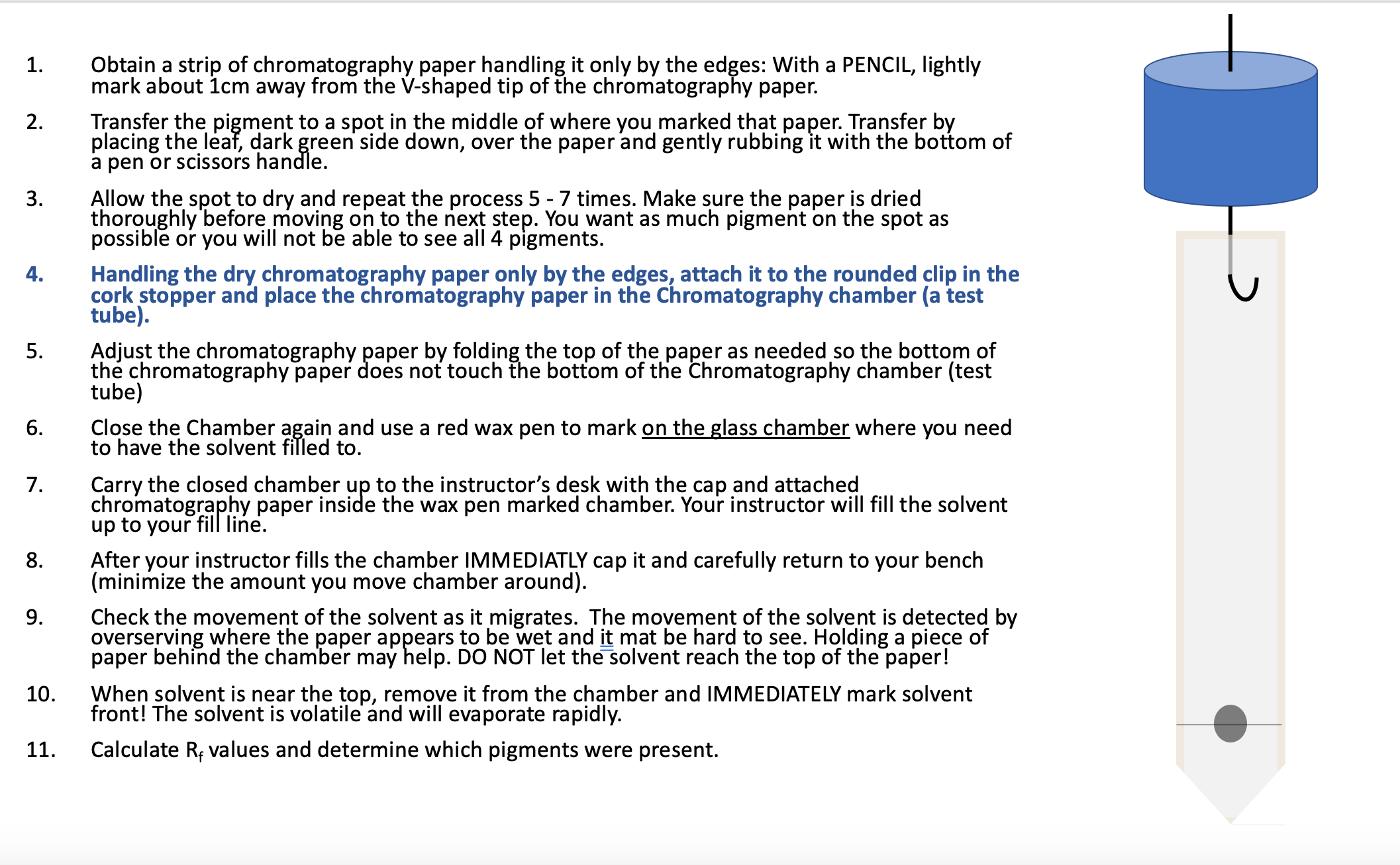 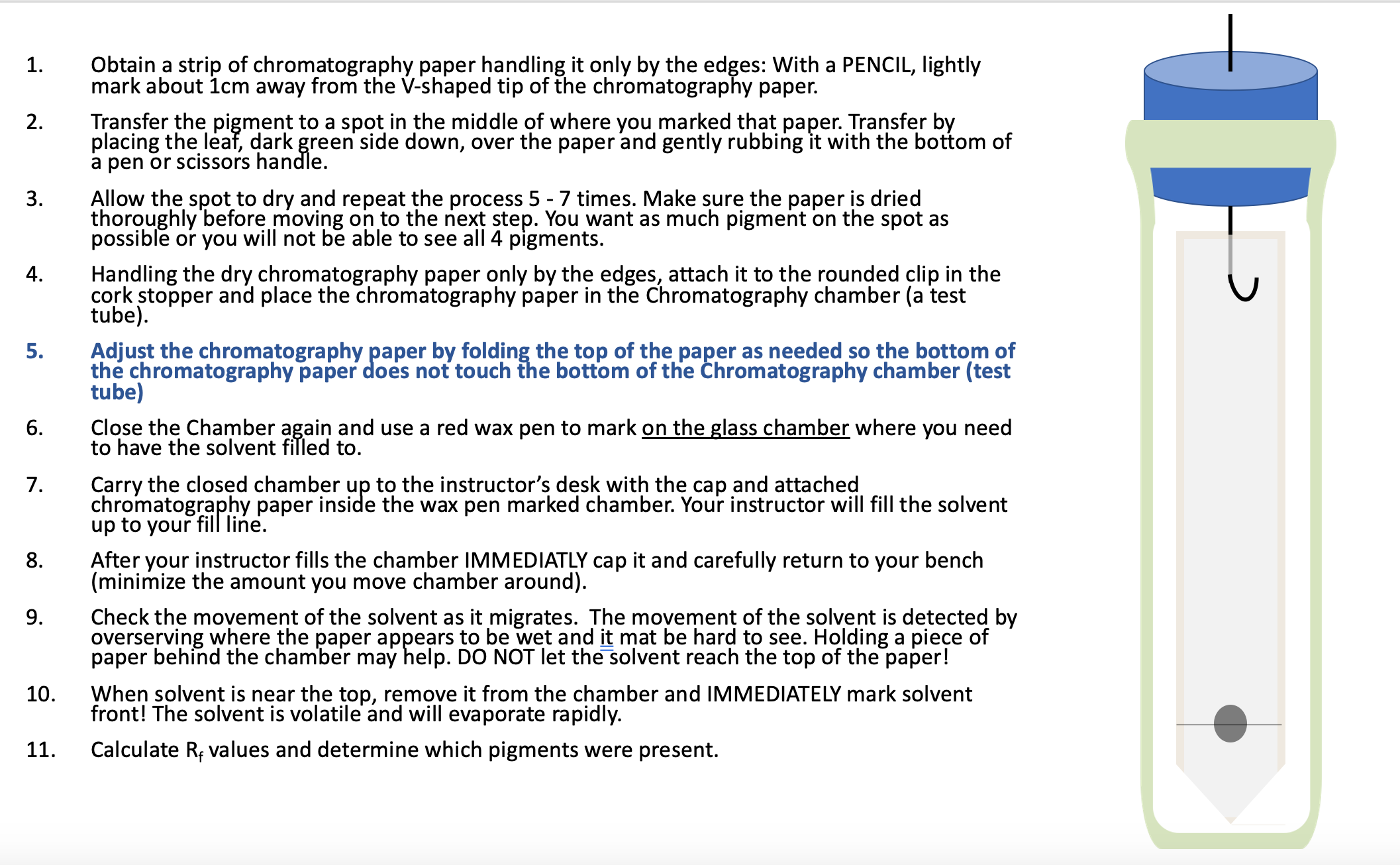 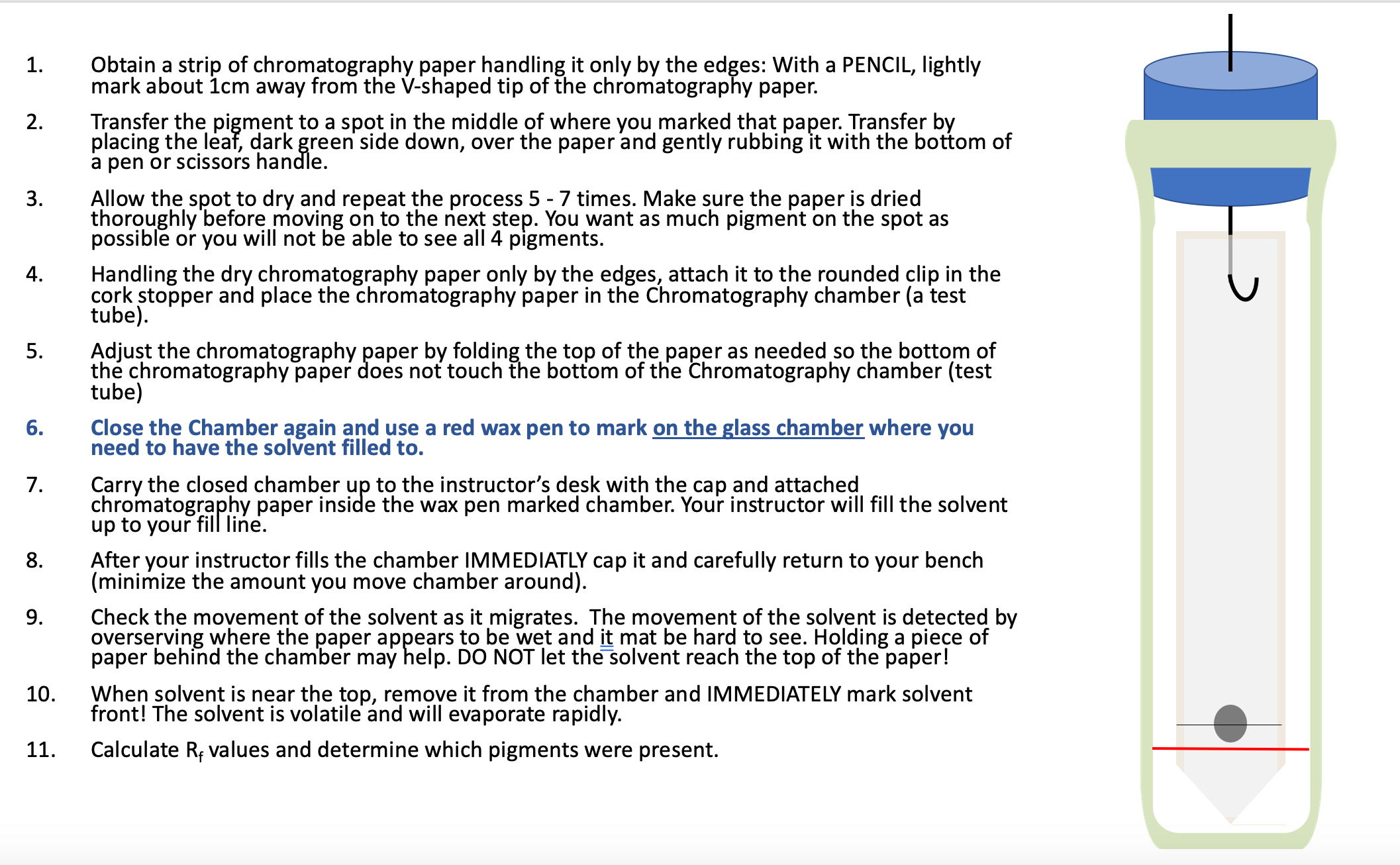 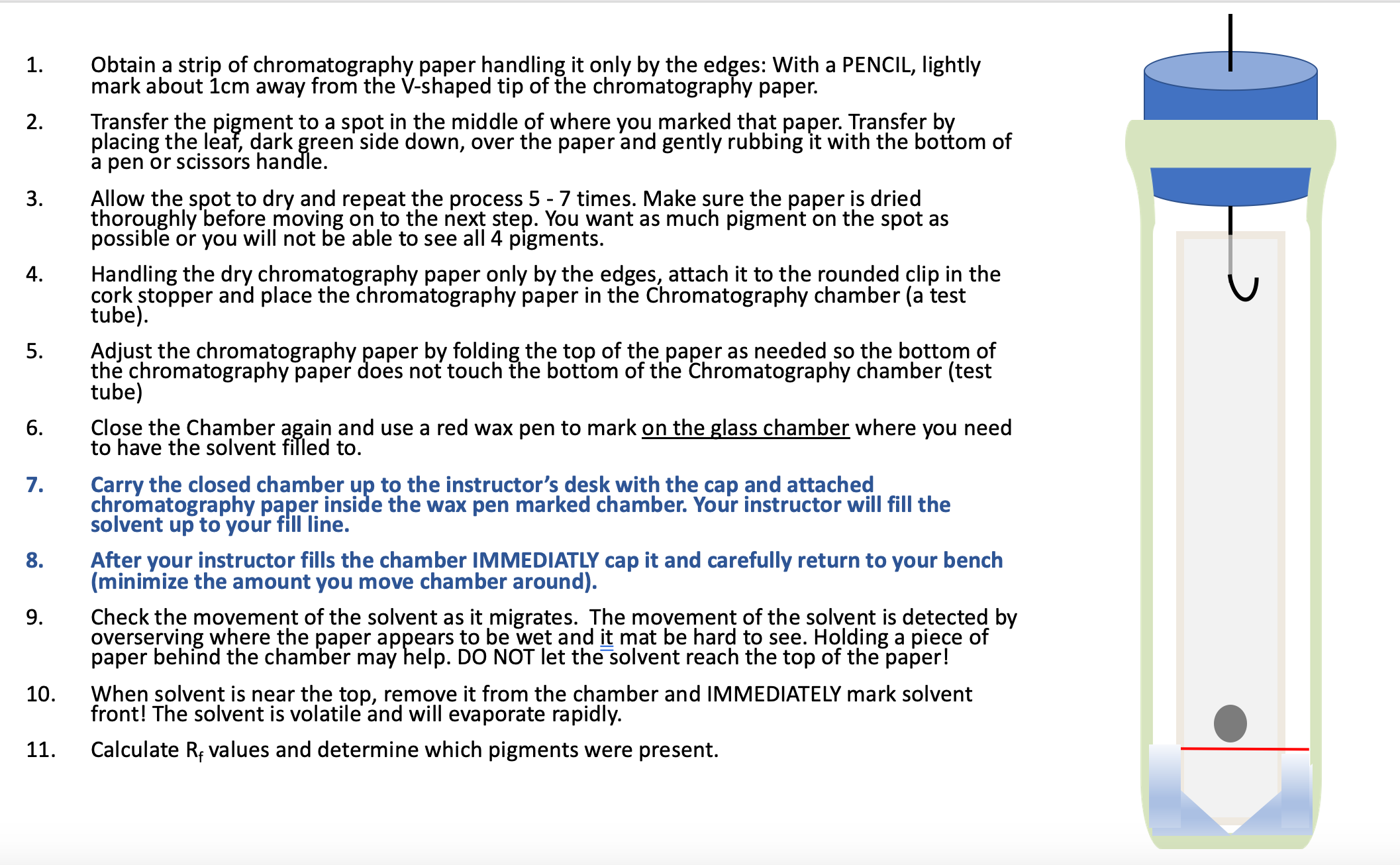 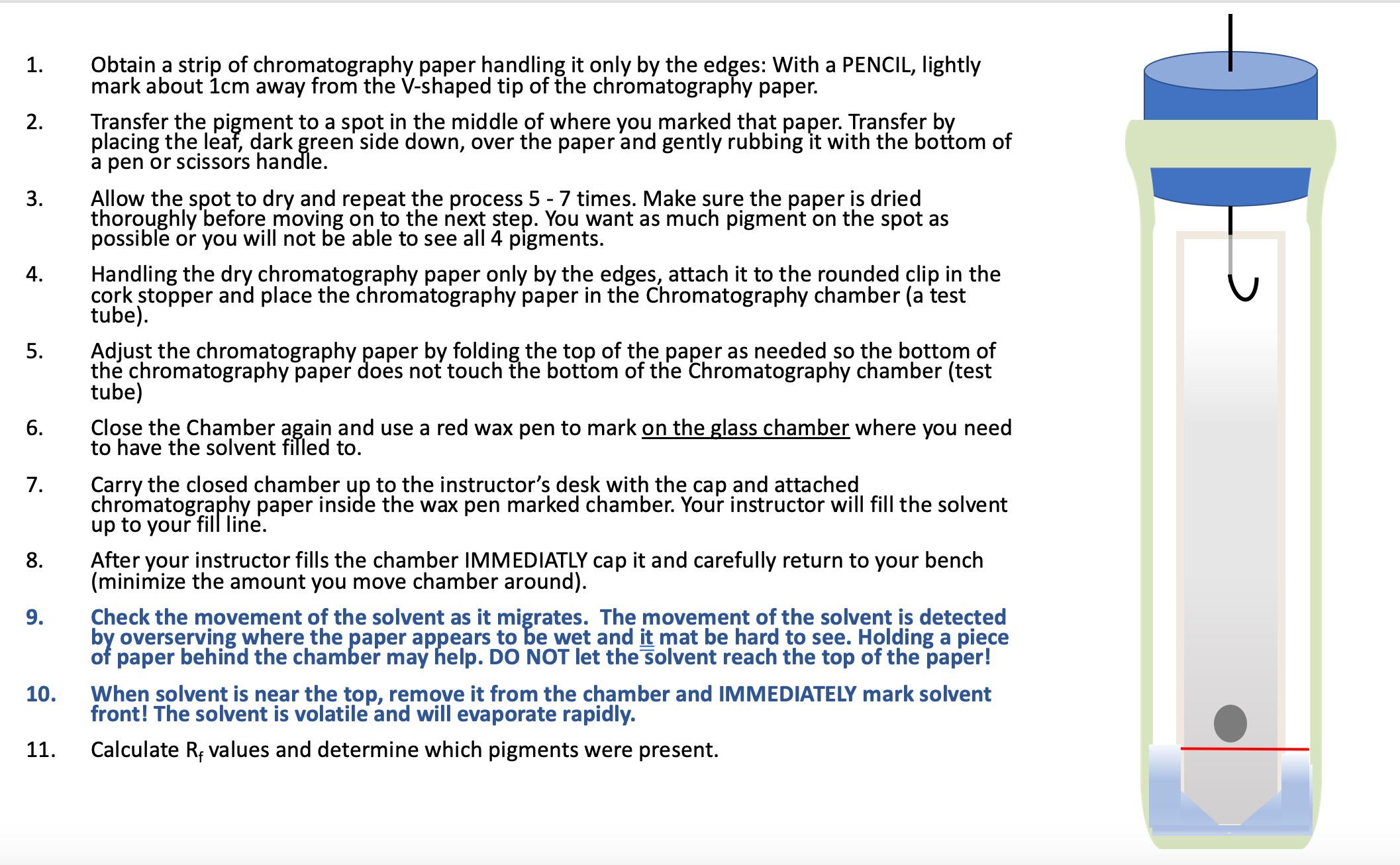 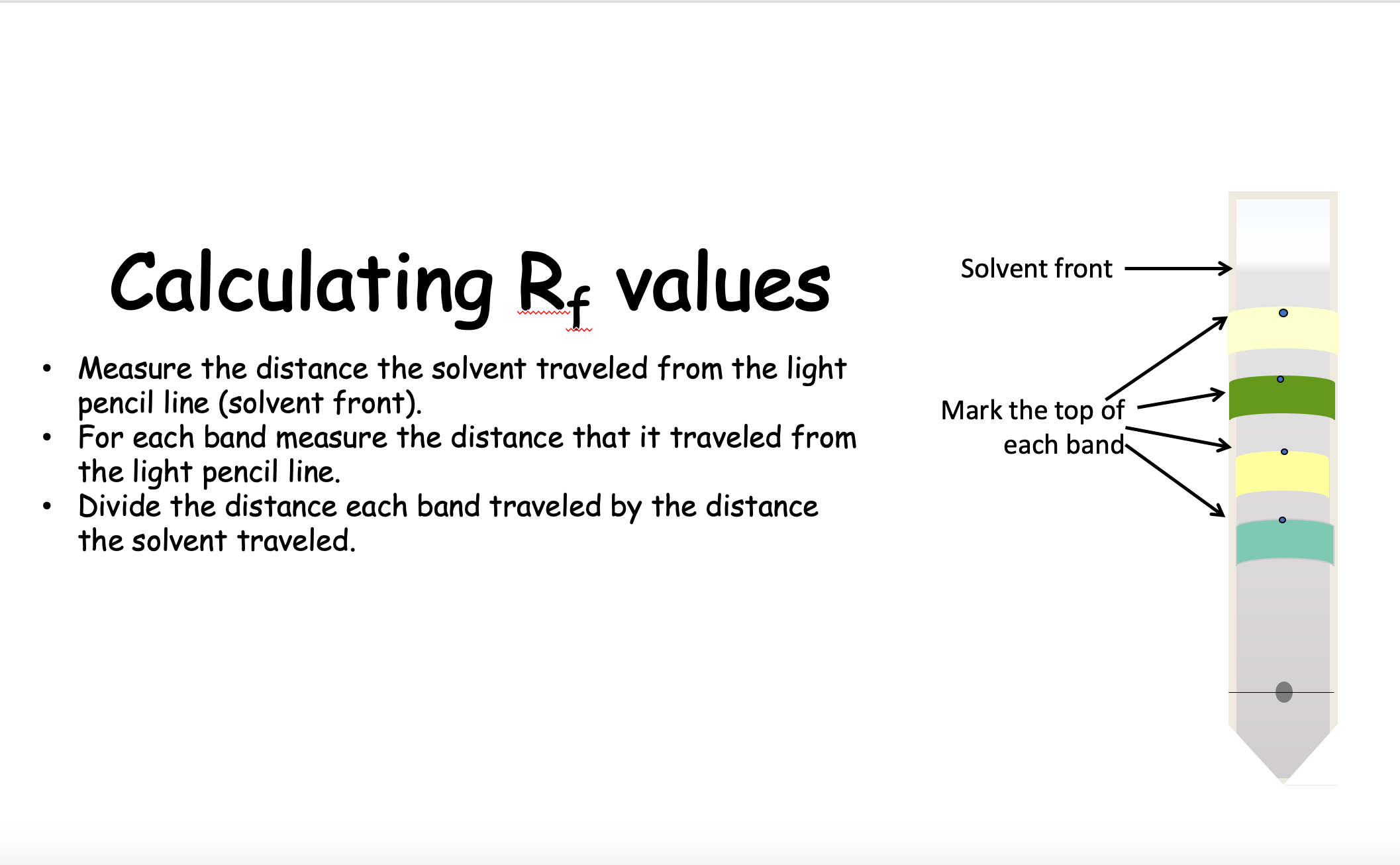 Complete Part B of your Lab Report.

• The visible spectrum, that part of the electromagnetic spectrum that our eyes can detect it a tiny fraction of the solar light spectrum.
• Within the visible spectrum the human eyes are good at differentiating subtle color differences but we are unable to quantify those differences.
• Spectrophotometry is a method that can quantify the amount of light able to pass through colored solution.
• Light that is not absorbed by the solution passes through it and is compared to a "blank" in which all light passes through.
• The amount of light that comes through the solution relative to the blank is the transmission (measured as % of light)
• The light that is absorbed by the solution is the absorption.
• Both are measured in optical density (OD) units.

In this exercise your instructor will demonstrate the use of the spectrophotometer to measure the amount of light that passes through and is absorbed by the extract of bean leaves used in your chromatogram. Absorbance readings (the percent of light absorbed) of the bean leaf extract will be taken at the wavelengths indicated in the table in your Lab Report (400nm - 700nm). Record each percent absorbance and graph the results in Part C of the Lab Report.

1. Take a green sprig of Elodea and cut a small piece off of each stem with a sharp, clean razor blade.
2. Place the Elodea in a test tube with the newly cut ends toward the test tube opening (i.e. the top).
3. Fill the test tube with 0.5% sodium bicarbonate (NaHCO3, aka baking soda). The sodium bicarbonate acts as an extra source of carbon for the plant. Keep in mind this carbon source will need to be replenished each time you repeat the trial.
4. Place the test tube in a rack 30cm away from the watt bulb your group was assigned and that has been screwed into a light fixture.
5. Place a 1,000-mL container full of water between the Elodea and the light to absorb heat produced by the bulb.
6. Turn on the light, and record the time.
7. When oxygen bubble are emerging regularly (2 or more per minute), begin counting the number of bubbles produced for 3 minutes and record in the table in Part D of the Lab Report.
8. Pour off the 0.5% sodium bicarbonate and replace it with fresh 0.5% sodium bicarbonate.
9. Repeat the above steps to obtain data for Trial 2. Repeating the experiment gives more accurate results.
10. Obtain data from groups that were assigned the other watt bulbs and add that data to Table 4.3.
11. Determine the average quantity of oxygen produced by Elodea 30 cm away from each watt bulb the class has been assigned (75 W, 120 W and 300 W).

What is the average quantity of oxygen produced by Elodea 30cm away from your assigned watt light source? What factors might affect the rate of photosynthesis? Distance from the light source? Amount of carbon available? Color of light?
Design an experiment to determine which factors affect the rate of photosynthesis. Have your instructor approve your experimental design before beginning your experiment.

Be careful to only change one condition and maintain all other conditions as consistently as possible when changing a variable. Also be careful to let the apparatus cool first and be sure to keep all electronic components free of water.
Complete Part D in the Lab Report.