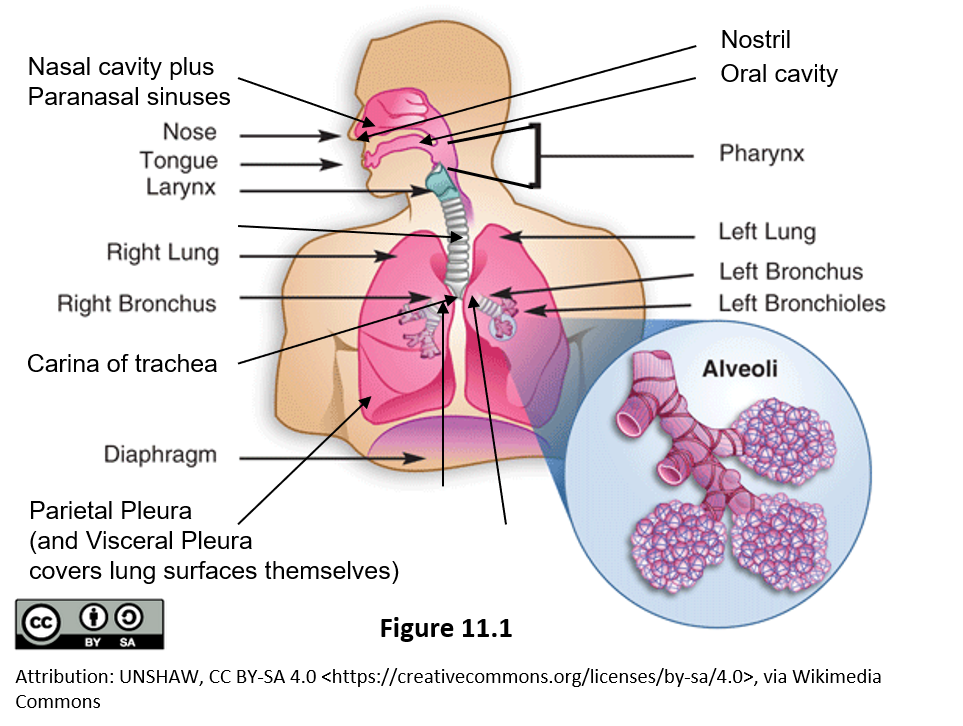 • Main function is exchange of gases (oxygen and carbon dioxide).
• It also functions to regulate pH of the body and is used for vocalization.
• In Mammals the respiratory system consists of a passage system (the conduction zone) and a gas-exchange system (the respiratory zone).
The Conduction Zone
• Oxygen-rich air enters through the nose or mouth and passes into the pharynx, larynx and then the trachea.
• In the chest (aka the thoracic cavity) the trachea splits into two large branches, one leading to each lung called the primary bronchi. 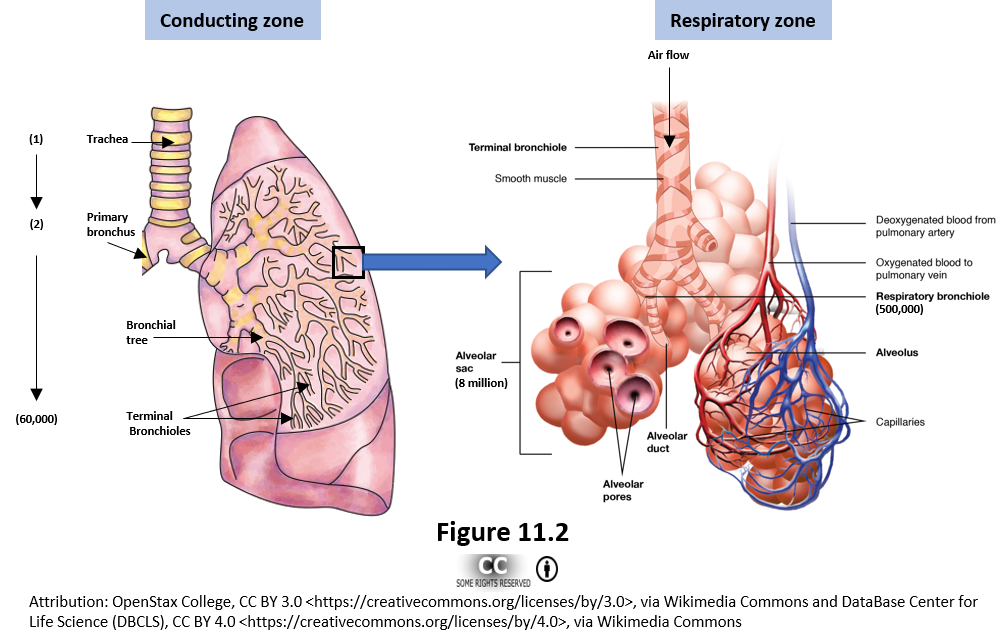 • Inside the lungs, each primary bronchus is further divided into smaller and smaller secondary and tertiary bronchi and eventually into even smaller branches called bronchioles.
The Respiratory Zone
• Gas-exchange occurs within microscopic structures called alveoli which cluster at the end of each  bronchiole.
• Alveoli are surrounded by a bed of capillaries, the smallest blood vessels.
• At this interface, between the alveoli and capillaries, oxygen and carbon dioxide are exchanged.
• Figure 11.1 & 11.2 shows the components of the respiratory system and the conducting and respiratory zones.

• Ventilation is the movement of air between the alveoli and the environment.
• When the diaphragm contracts, it allows air to enter the lungs.
• When the diaphragm relaxes, the air leaves the lungs.
• Oxygen moves by diffusion into the oxygen-poor blood.
• Carbon dioxide diffuses from the blood into the air spaces of the lung and is expelled.
• Breathing involves two steps: actively drawing air into the lungs (inhalation) and expelling air out of the lungs (exhalation).
• Both steps rely on rib muscles and the diaphragm (the main breathing muscle) to expand and collapse the chest cavity.
• Inhalation involves the contraction of the dome-shaped diaphragm which expands the chest cavity, increasing the volume of the lungs.
• The increased volume creates a partial vacuum that sucks air into the lungs.
• This is called negative pressure inhalation.
• Exhalation occurs when the diaphragm relaxes and resumes into dome-shape. This decreases the volume of the lungs and forces the air out.
• The lungs are never entirely without air; a small amount remains in the lungs to prevent collapse.
• The rib muscles can contact to allow more air to be inhaled or exhaled.
• In the fetal pig the lungs appear collapsed. Remember these pigs were never born and never relied on their lungs; instead they received all necessary oxygen from their mother via the placenta and umbilical arteries.
• Watch the Bell Jar demonstration to see how inhalation and exhalation occur.

Click on the image below to watch a molecule of oxygen as it passes through the structures of the respiratory system. 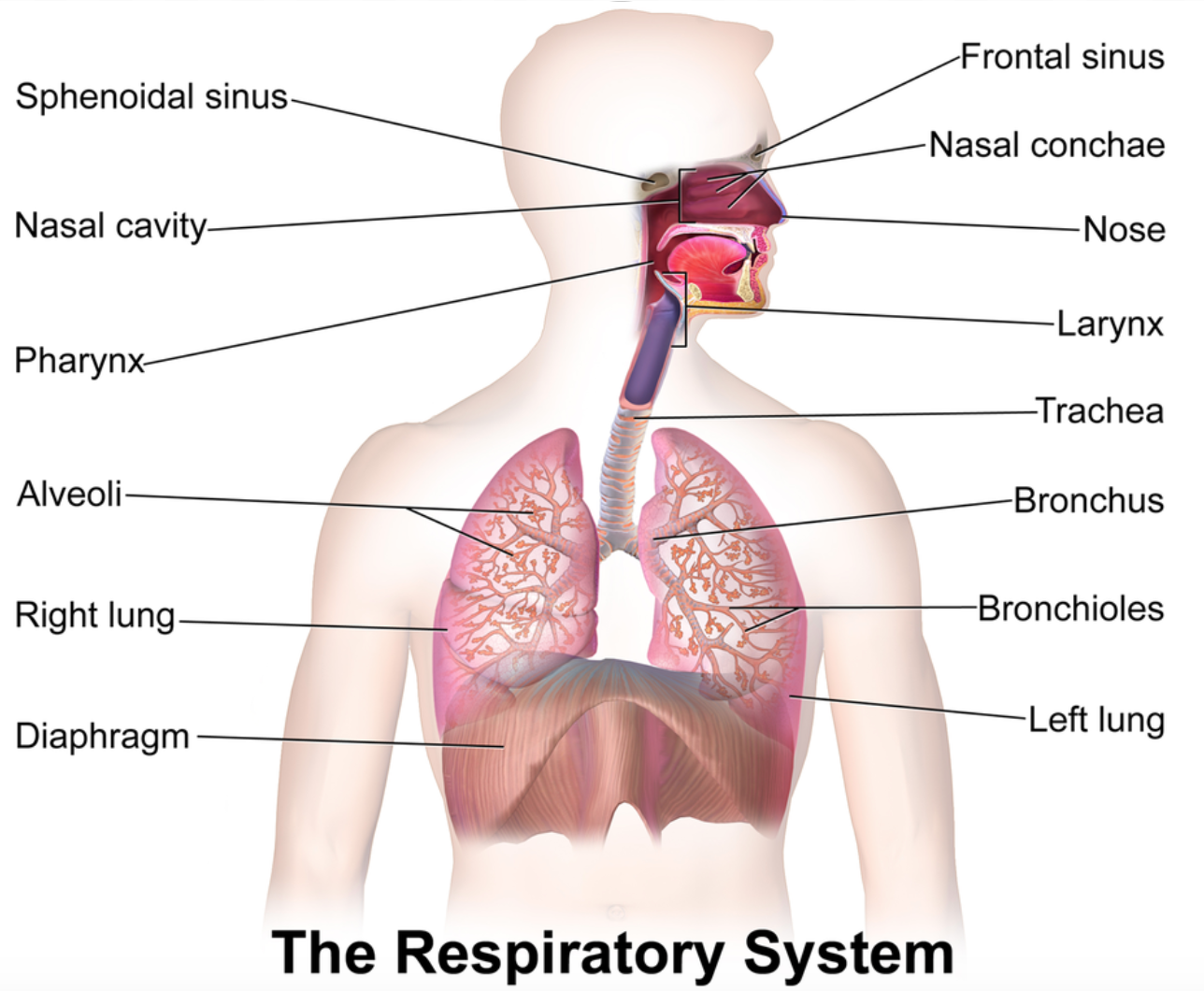 • Provides a pathway for transport of gases and nutrients that cells need as well as transporting metabolic waste that cells must rid themselves of.
• Its primary role is to transport substances to and from all parts of the body.
• The circulatory system moves nutrients, wastes, chemical messengers (hormones) and gases.
• Consists of: The heart, arteries, arterioles, capillaries, venules and veins. 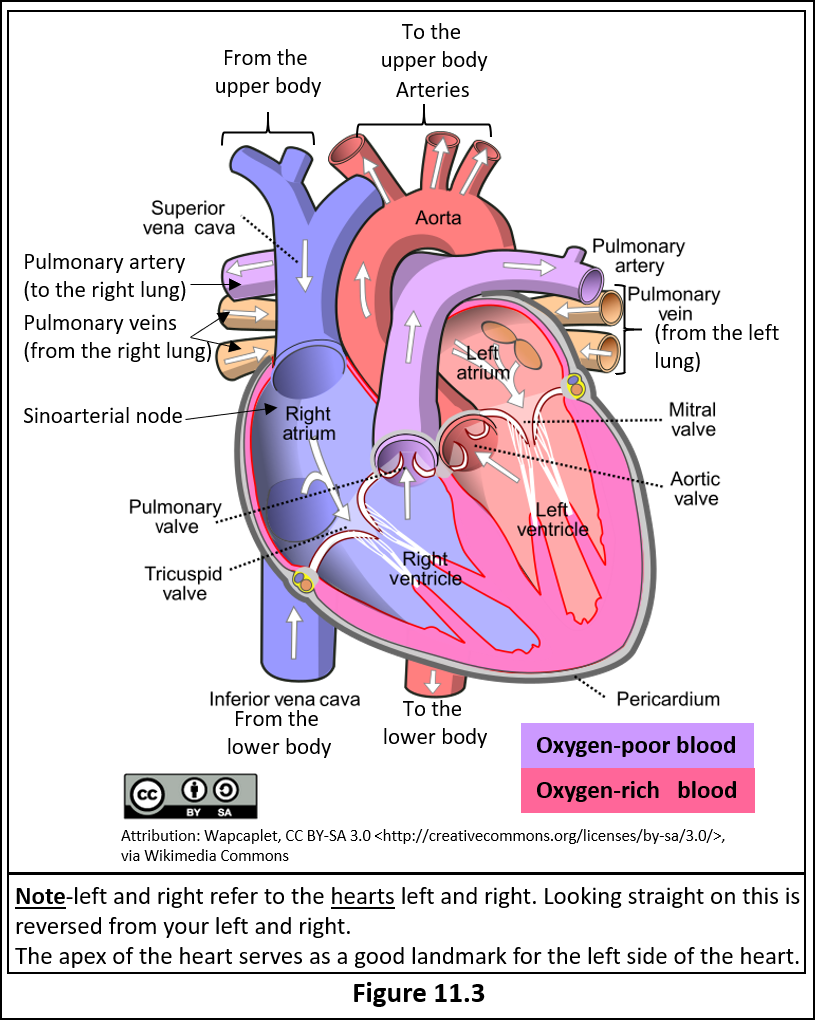 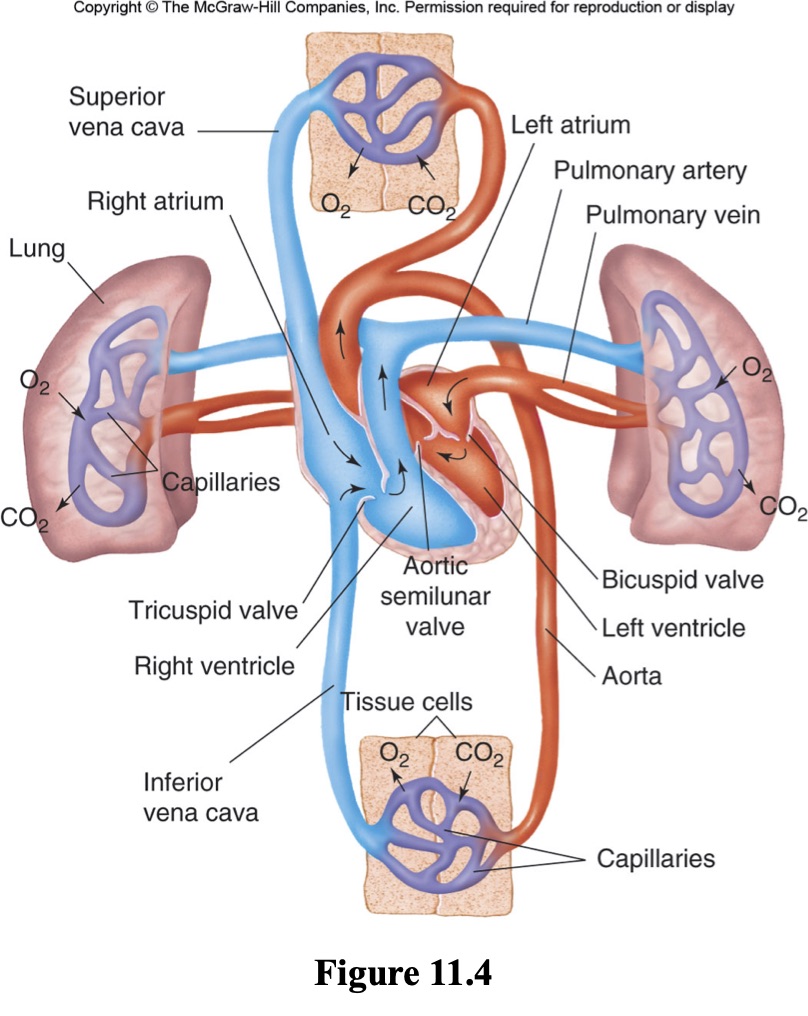 • Blood always enter in to the heart through a vein (easy to remember, the word vein has IN right in it vein).
• That is what all veins have in common, they all carry blood, whether it is oxygenated or deoxygenated, into the heart.
• From veins blood flows into an upper atria (either the right or left atria.)
• Deoxygenated blood enters the right atria via the largest vein in the body, the vena cava. The superior vena cava carries blood returning from the head and neck. The inferior vena cava carries blood returning from the rest of the body.
• Oxygenated blood enters the left atria via 4 small pulmonary veins.
• As the heart beats the blood moves from the upper atria into the larger lower ventricles (left or right ventricle).
• The blood is then pushed out of the ventricles into large arteries (either the aorta or the pulmonary trunk).
• All arteries carry blood away from the heart (arteries - away).
• That is one thing that all arteries have in common, they all carry blood, whether it is oxygenated or deoxygenated, away from the heart.
• The largest artery of the body, the aorta, carries oxygen rich blood out from the left ventricle to the body.
• The second largest artery, the pulmonary trunk, carries deoxygenated blood from the right ventricle to the lungs.
• Notice that there is no relationship between deoxygenated/oxygenated and being an artery or a vein!
• The heart is really  2 side by side pumps.
• The right side of the heart receives deoxygenated blood via the vena cava and pumps it to the lungs via the pulmonary trunk and then the left or right pulmonary arteries.
• This blood is rich in carbon dioxide (a waste product of cellular respiration) and low in oxygen.
• In the capillary bed of the lungs the carbon dioxide is removed from the blood and oxygen is added. This is called the pulmonary (which means lung) circuit.
• The now oxygenated blood returns to the left side of the heart via the pulmonary veins.
• The left side pumps the blood out via the aorta to the entire system (from head to toes).
• This is called the systemic circuit.
•  As blood travels through the systemic circuit it drops off oxygen to cells that need it (so they can carry out cellular respiration) and picks up the carbon dioxide (a waste product of cellular respiration).
• The deoxygenated, carbon dioxide rich, blood then again returns to the pulmonary circuit via the vena cava.
• Figure 11.4 shows the two side by side circuits and the flow of blood through them.

Click on the image below to trace the path of a red blood cell through the Cardiovascular system. 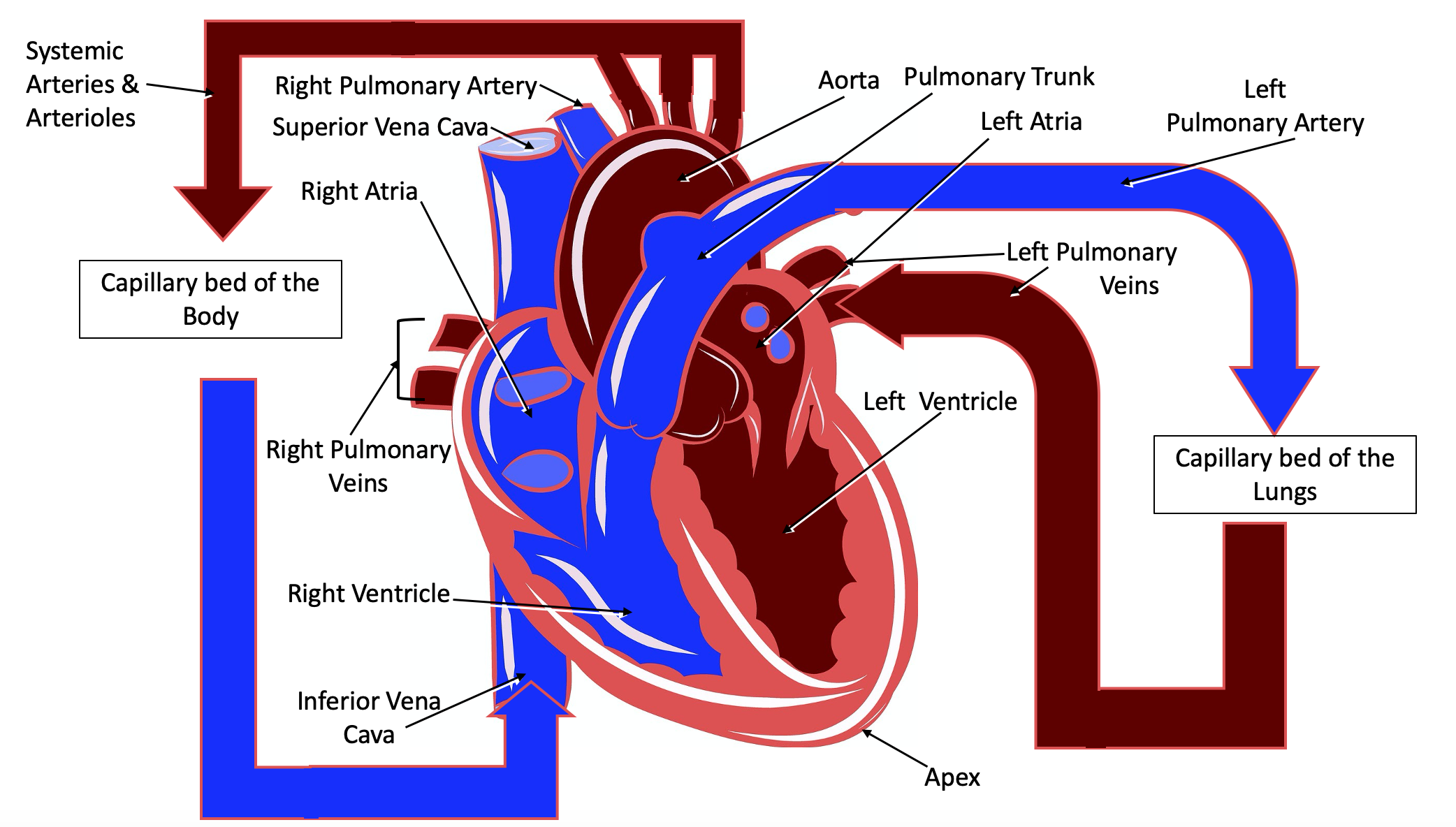 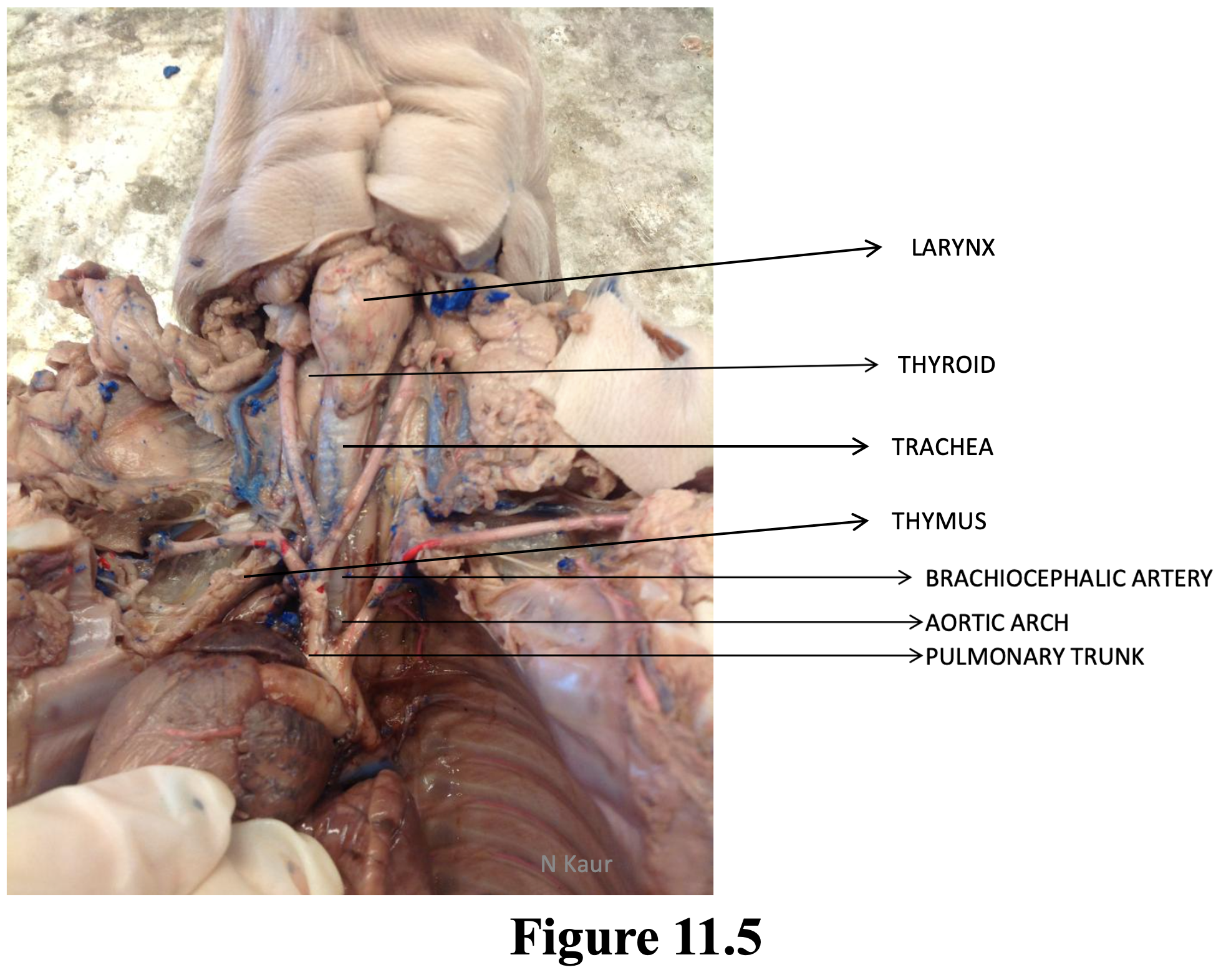 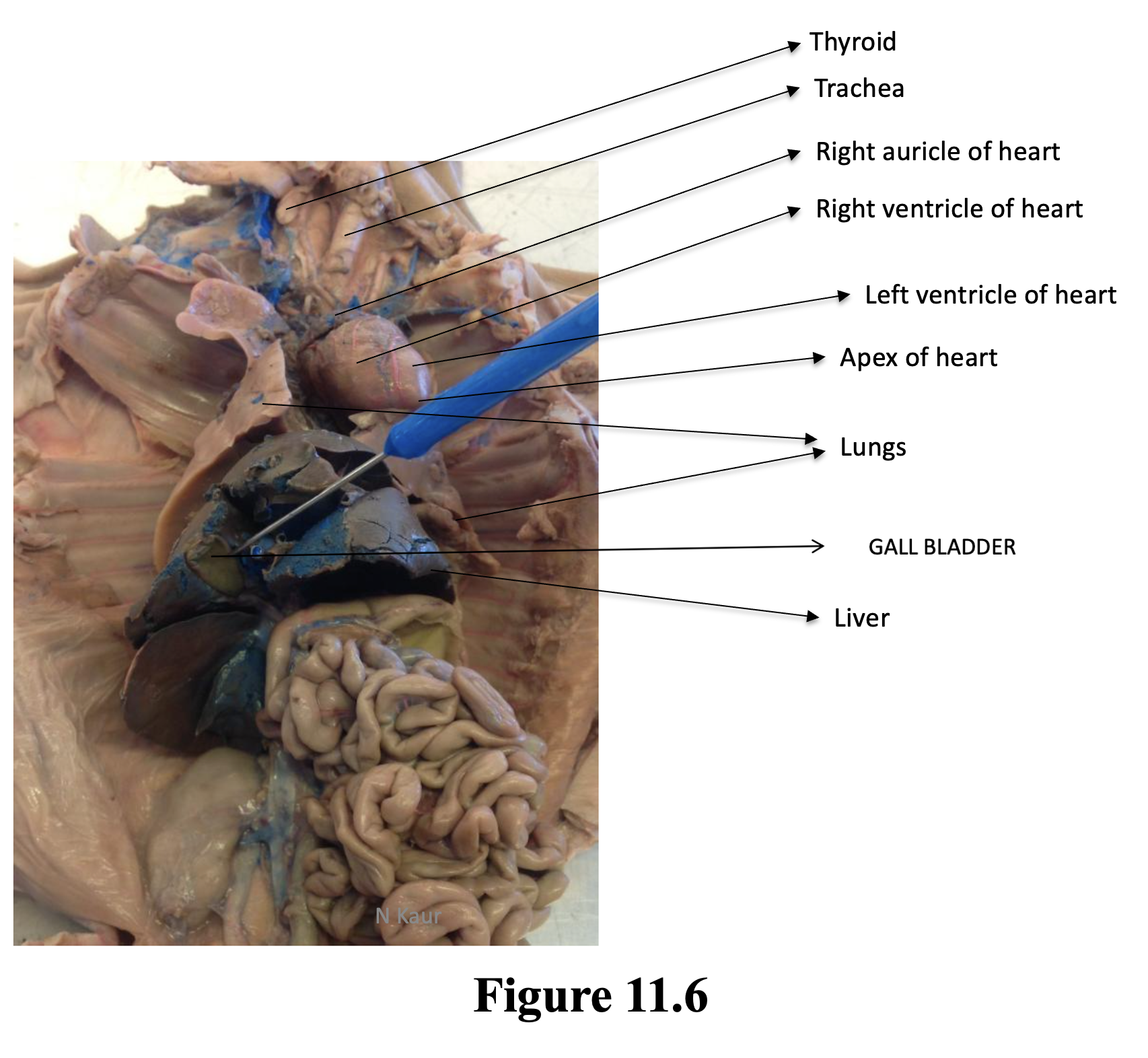 Figures 11.5 and 11.6 highlight the major organs found in the neck and thoracic cavity of the fetal pig.
Figure 11.5 shows some of the major organs found in the neck including the following;
• The larynx which is a hollow muscular enlarged organ in the upper part of the throat.
• The thyroid gland which is usually a butterfly-shaped organ that surrounds part of the trachea. This organ is part of the endocrine system. In this image the thyroid has been cut and is off to one side to reveal the trachea.
• The trachea which is a hollow pipe surrounded by rings of cartilage that carries air into the lungs.
• The thymus, which is a granular organ extending from above the heart into the neck is part of the immune system. In this image it has been partially teased away to reveal the heart in the thoracic cavity.  Also highlighted in the image are three major blood vessels in the thoracic cavity: the brachiocephalic artery, the aortic arch and the pulmonary trunk.
Figure 11.6 shows the major organs of the thoracic cavity including the some of the major parts of the heart;
• The right auricle which looks like a dark-red dog ear. The right auricle covers the right atria.
• The right ventricle and the left ventricle which are separated by red and blue blood vessels (coronary arteries and veins);.
• The apex of the heart which is found in the lower left side of the heart. The heart sits between two lungs which occupy much of the thoracic cavity.
• Also highlighted are the thyroid and trachea discussed in figure 11.5 and the liver and gallbladder which are in the abdominal cavity and were discussed in lab 10.