Learning Objectives
In this lab students will
- Learn about local tides and tidal zones.
- Observe organisms specific to each tidal zone.
-  Understand tidal cycles and their connection to phases of the moon.
- Identify organisms of the sandy beach and piling communities.
- Read map coordinates in longitude and latitude to locate coastal landmarks.
- Select, sketch, identify, and describe several marine organisms and their habitats.

• The marine environment includes any aquatic habitat in which the water contains salt, typically an ocean or sea.
• Salts are deposited into the ocean from terrestrial sources in the form of chlorides (such as sodium chloride), potassium chloride, calcium chloride), or as sulfates (such as potassium sulfate and magnesium sulfate).
• The amount of salt is measured as salinity.
• Average marine salinity is about 3.5% or 35 parts per thousand, which is equal to 35 grams of salts per liter of seawater.
• This lab exercise encourages you to analyze the abiotic and biotic factors that influence the distribution and evolution of marine organisms. In the ocean, the most important of these factors include the depth of the water and the distance from shore, the salinity, and the degree of light penetration.
• The availability of nutrients and oxygen as well as the temperature, are also important factors to which marine organisms vary in response to local conditions.
• The traits that each organism has that allows it to survive in its habitat are called adaptations.
• As you complete these activities, pay attention to the specific adaptations required for each environment.

• As tidal waters rise and recede twice a day, they both submerge and expose to sunlight the intertidal sand itself.
• Important abiotic conditions that organisms must contend with include salinity, rapidly changing temperatures, oxygen levels, and the composition and instability of the sand itself.
• Some biotic factors include the availability of nutrients or food matter, and the constant threat of predation.
• The intertidal zones also have varying ranges (differences in the height of tidal waters), that are influenced by the changing seasons, weather conditions, and the relative position of the sun and moon.
• These are the zones that are most commonly described in intertidal habitats: 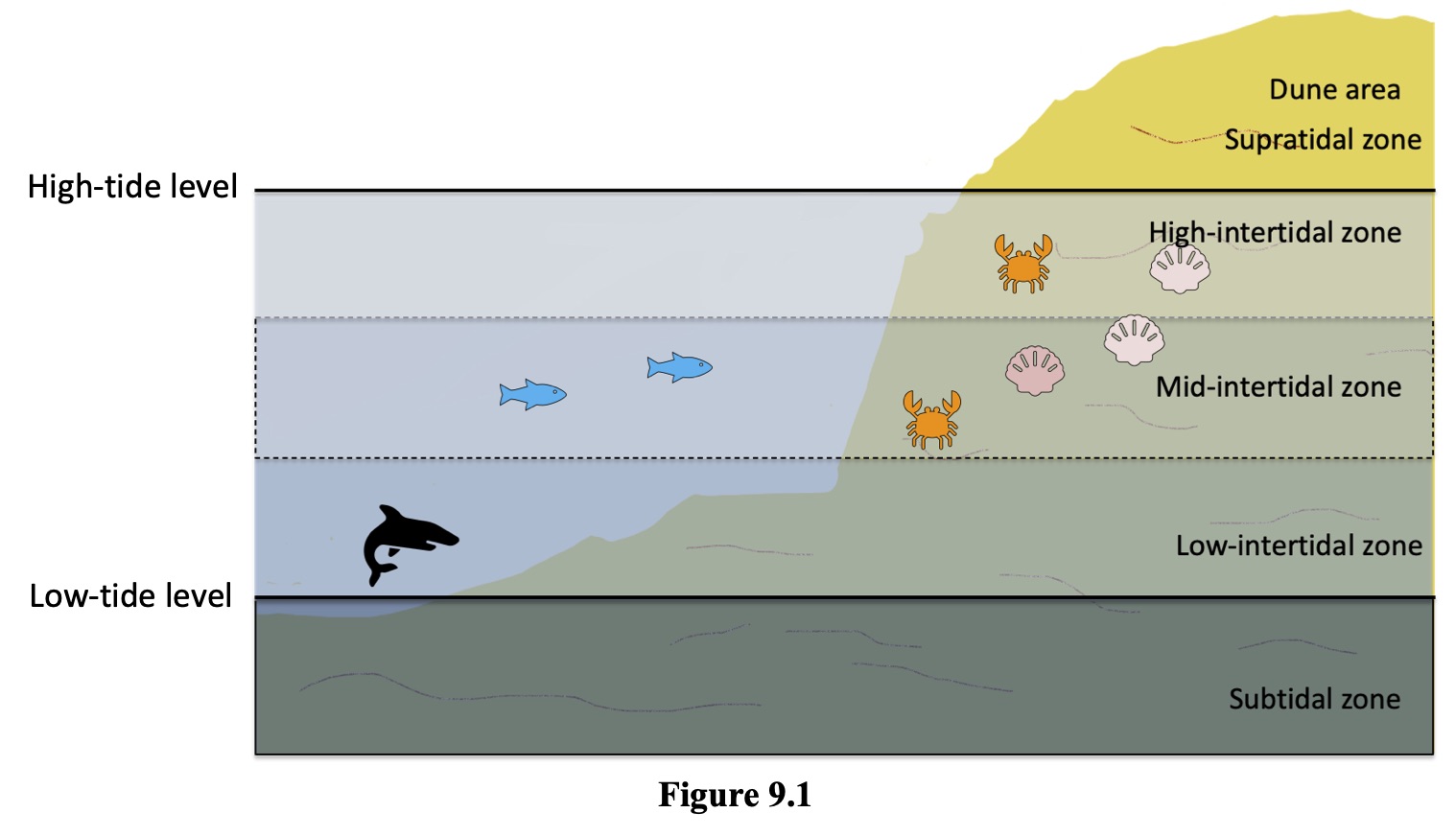 Intertidal Zones
- Dune Area is dry, hot, porous sand that holds little moisture. Dune plants may be present.
- Supratidal Zone exists above high tide level, little moisture and food, exposed to direct wind and sunlight. - High-Intertidal Zone is wet only by highest Spring tides and stormy weather conditions, mostly exposed to air and sunlight.
- Mid-Intertidal Zone is wet by tides twice a day, which bring nutrients and dampens the sand, exposed to sunlight longer than low intertidal zone.
- Low-Intertidal Zone is covered by water and pounding waves for longer periods of time, organisms here must be adapted to grinding and abrasive conditions, ends at the low-tide level.
- Sub-Tidal Zone is constantly wet, exists as far out as the sand is moved by wave action, conditions are more stable, organisms native to this zone cannot survive long exposed to the dry air.
- Figure 9.1 shows the tidal zones.

• Many birds are important species in marine communities.
• Anseriformes is an order of birds that includes over 180 species, including ducks, geese and swans and others collectively referred to as waterfowl.
• They are medium to large size birds and are usually found in freshwater or marine habitats.
• Marine birds can be found on every continent and are known for their mass migrations that symbolize the change in seasons to people in temperate climates.
• They are adapted to swimming and floating on the water surface, and many can dive beneath the water.

• Cetaceans are a diverse order of aquatic mammals that consist of whales, dolphins and porpoises.
• Like you, they are mammals. This means they are warm blooded, give birth to live young, nurse their young, have traces of hair or fur and must breathe air into their lungs.
• Most live in the sea however, some live in rivers. Modern cetaceans are divided into two suborders;       1.  Odontoceti (toothed whales) which bear many teeth. Dolphins, porpoises, belugas, narwhals, killer whales, sperm whales and beaked whales are a few examples of toothed whales.
2. Mysticeti (baleen whales) which lack teeth as adults. They feed by straining small marine organisms out of the water using plates of baleen, a horn-like material that hangs from the roof of their mouth. Blue, right, humpback, grey and fin whales are examples of baleen whales.

Organisms of the North Atlantic Ocean

• Any location on Earth can be located using specific coordinates.
• Latitude lines run east-west. The most important line of latitude is the equator, which is at 0˚. The equator separates the northern and southern hemispheres.
• Longitude lines run north-south and converge at the poles. The most important line of longitude is the Prime Meridian, which is at 0˚. The Prime Meridian separates the Eastern and Western hemispheres.
Figure 9.2 shows how to use coordinates to find a location on a map. 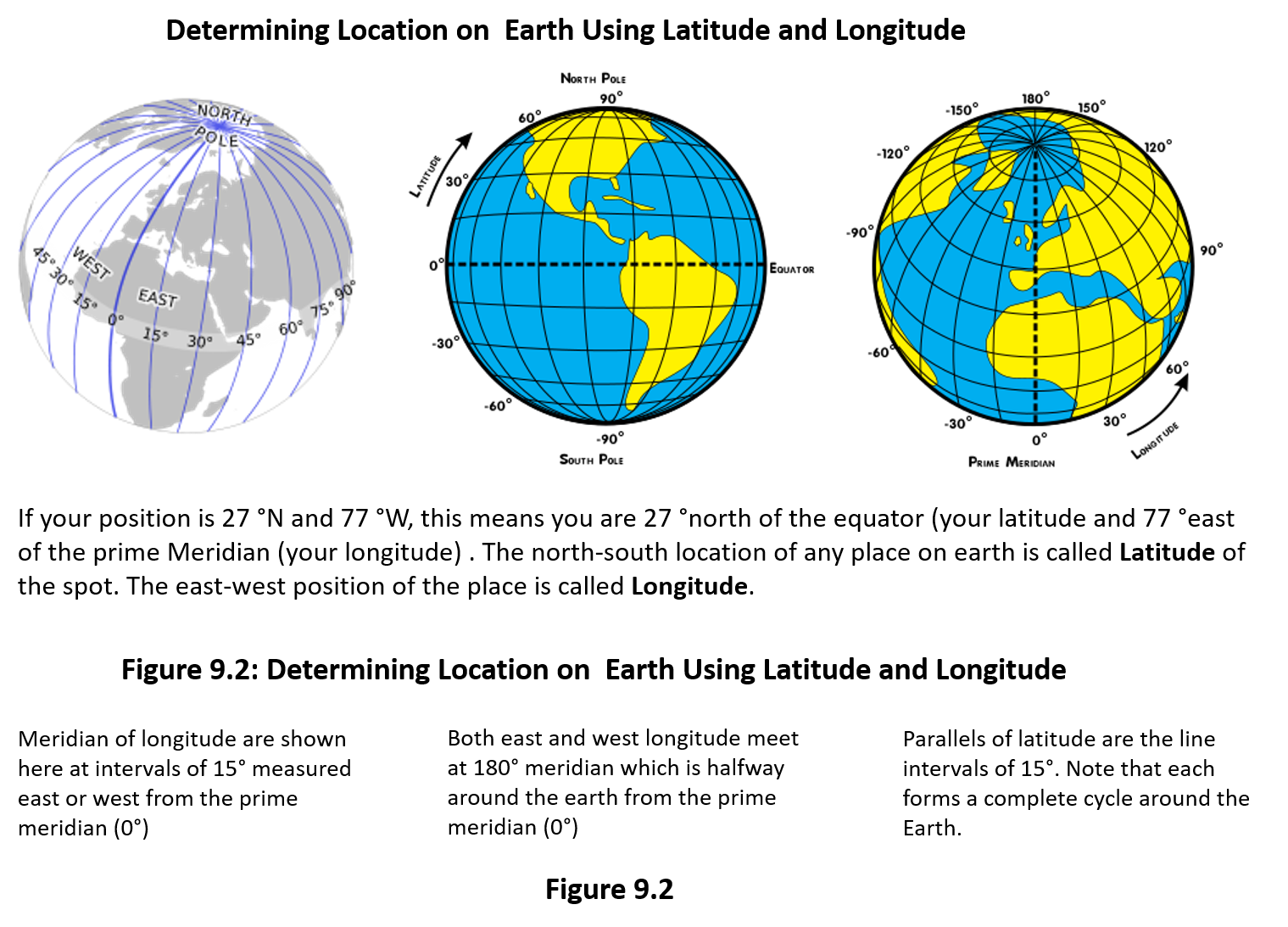 • The movement of the tides is caused by the gravitational pull of the moon and the sun.
• These forces pull on the Earth and create immense bulges of water that form on both sides of the planet.
• While the Earth rotates on its axis, we see its effect as the rising and receding tides along our coastlines.
• Locally, the New York Harbor experiences the rise and fall of tide about twice a day.
• It reaches its highest point approximately every 12 hours and 25 minutes.
• The tidal range for this area is about 6 feet between the high and low tide marks.
• To be able to forecast upcoming tides, Tide Charts are provided in local newspapers or can be downloaded as free apps, usually in the weather section.
• Look at the tide chart below: notice that it lists the time for both of the high tides for each day for various places.
• It is at these times that the tides are at their highest point.
• NOTE: Kingsborough is not listed but it is close to Coney Island, the nearest landmark listed in the chart.
• Many tidal charts do not list individual areas, so often you must estimate tide times from these major landmarks.
• Slack Tide refers to the transition or change in the direction of the tidal current, when the current may slow to a halt.
• Slack tides lasts for a brief (often just a few moments) period of time, and the timing of slack tides (or slack water) varies depending on the local conditions. It may occur at the same moment the tide turns, or up to three hours later. 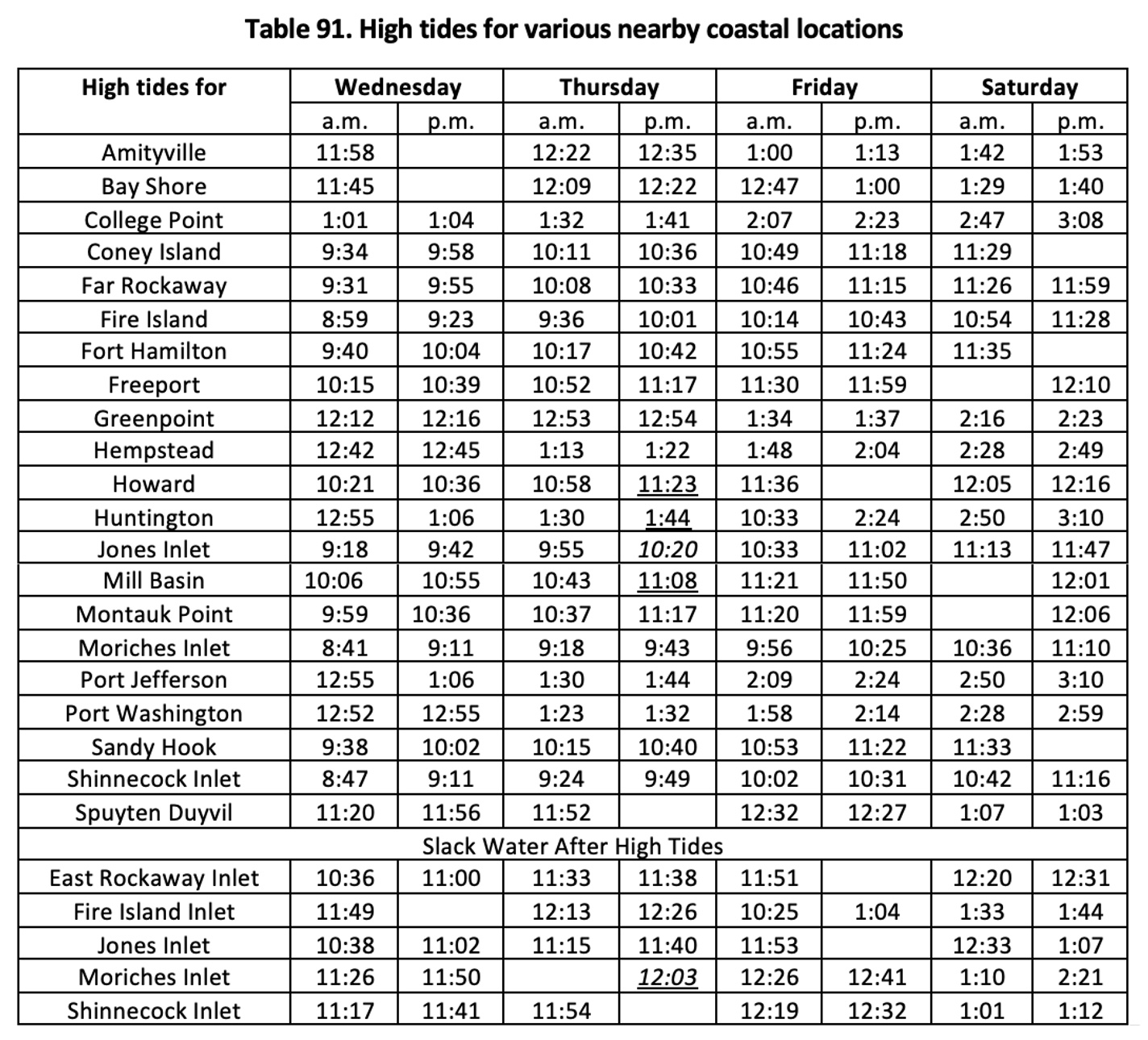 The Effects of the Lunar Cycle on Tides

• When the sun, moon, and Earth lay in a direct line, the stronger pull of both increases the difference between the tidal levels, creating exceptionally high and low tides known as Spring Tides.
• This occurs during the full and new moons of each lunar month.
• When the sun and moon lie at right angles, the sun counteracts the attractive force of the moon and causes a Neap Tide, or a diminished tidal range, which occurs during the first and last quarter moons of each lunar month.
This is an example of the Lunar Cycle for the Month of September.