Learning Objectives
In this lab students will:
- Define taxonomy.
- List the six kingdoms and their distinguishing characteristics.
- Be able to place major phyla within the six kingdoms.
- Be able yo use a dichotomous key to classify a group of organisms.
- Utilize binomial nomenclature.

• Taxonomy is the science of naming and classifying living organisms into distinct groups based on evolutionary relationships.
• Aristotle developed the first system of classification.
• He arranged organisms based on how complex or “advanced” he felt they were.
• Aristotle’s system only recognized two Kingdoms: one that contained all the plants and another that contained all the animals.
• But there were organisms that didn’t fit neatly into either one of these groups.
• Fungi are sessile and have thick-walled cells like plants but were not photosynthetic like animals.
•  Euglena are one-celled organism with a tail and no cell wall, similar to animals. But, in the summer. they             have chloroplasts and perform photosynthesis like plants. In the winter they function as a decomposer.            like fungi.
• Are these organisms an animal or a plant???
• Additionally, Aristotle did not have the advantage of having a microscope. He was unaware of the existence of tiny single celled organisms like bacteria.
• Just because Aristotle suggested that there were only 2 Kingdoms does not mean we had to stick to that system.
• Once we knew more it was clear we could now keep the old 2 Kingdom system.
• In the 1700's Carolus Linnaeus developed a hierarchal system to classify organisms that is still used today.
• Organisms are grouped into Taxa which are a series of hierarchical groups.
• The broadest group contains most organisms. These broader groups are subdivided into smaller taxa until the level of the individual species is reached.
• All organism within a particular taxon share certain characteristics due to their evolutionary relationships.
• Linnaeus originally recognized 3 Kingdoms. We now recognize 6 Kingdoms.
• Information about evolutionary relationships was originally obtained by comparing anatomical similarities and developmental patterns.
• Modern technologies, such as molecular biology, have enhanced our understanding of evolutionary relationships. We now incorporate molecular evidence from protein and DNA profiles when determining evolutionary relationships. 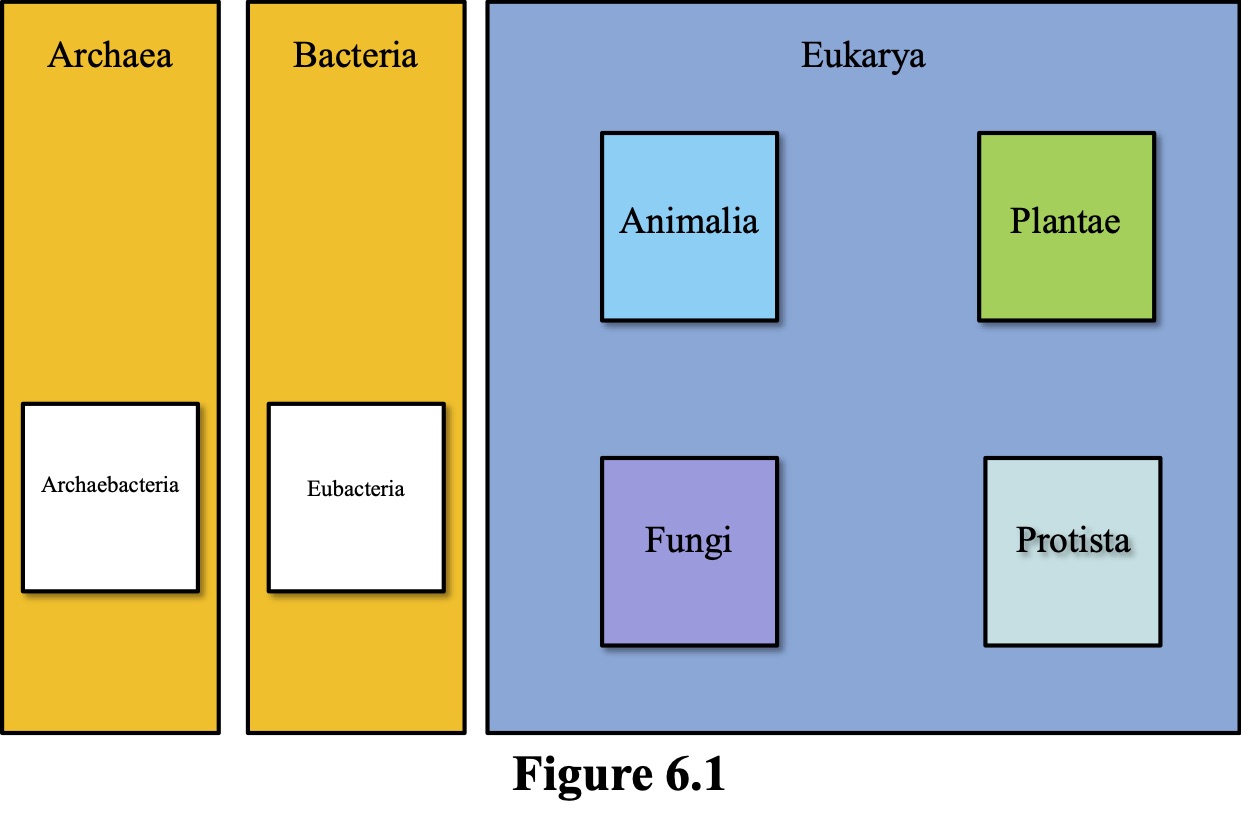 • We now recognize 8 taxa (Domain, Kingdom, Phyla, Class, Order, Family, Genus & species).
• There are 3 domains (Archaea, Bacteria and Eukarya).·
• Currently the Domains Archaea and Bacteria each contain only one Kingdom.
• The Domain Eukarya contains 4 Kingdoms (Plantae, Animalia, Protista & Fungi)
• One of the most remarkable aspects of biology is the extreme diversity of living organisms. The Natural Science Foundation estimate that there could be up to 100 million species living on Earth, most of which remain unidentified.
• Taxonomy is an important tool used by biologist to organize all these living things.
• Figure 6.1 shows the current classification with 3 domains and 6 Kingdoms.
• Stay tuned! As we learn more the number of kingdoms may change!
• Watch Video to learn more about Taxonomy.

• These groups are arranged hierarchically from the largest, most inclusive group to the smallest, most exclusive group.
• Domains are the most inclusive taxa and is based on the type of cell that makes up the organism.
• There are three domains: Archaea (primitive single-celled organisms, many of which live on extreme environments), Bacteria (single-celled organisms with very simple cellular structure), and Eukarya (single or multicellular protists, fungi, animals and plants. These all have more complex cellular structures).
• The most exclusive category, species, demotes a group of organisms that can breed with others of the same species and produce fertile offspring.
• Each organism has a place in the classification system.
• Look at Figure 6.2 and note the taxon that the sparrow, field mouse, chimpanzee and human share in common and where they begin to differ.
• Also look at the cladogram (Figure 6.3). Notice that the closer organisms are on the cladogram the more taxa they share in common. 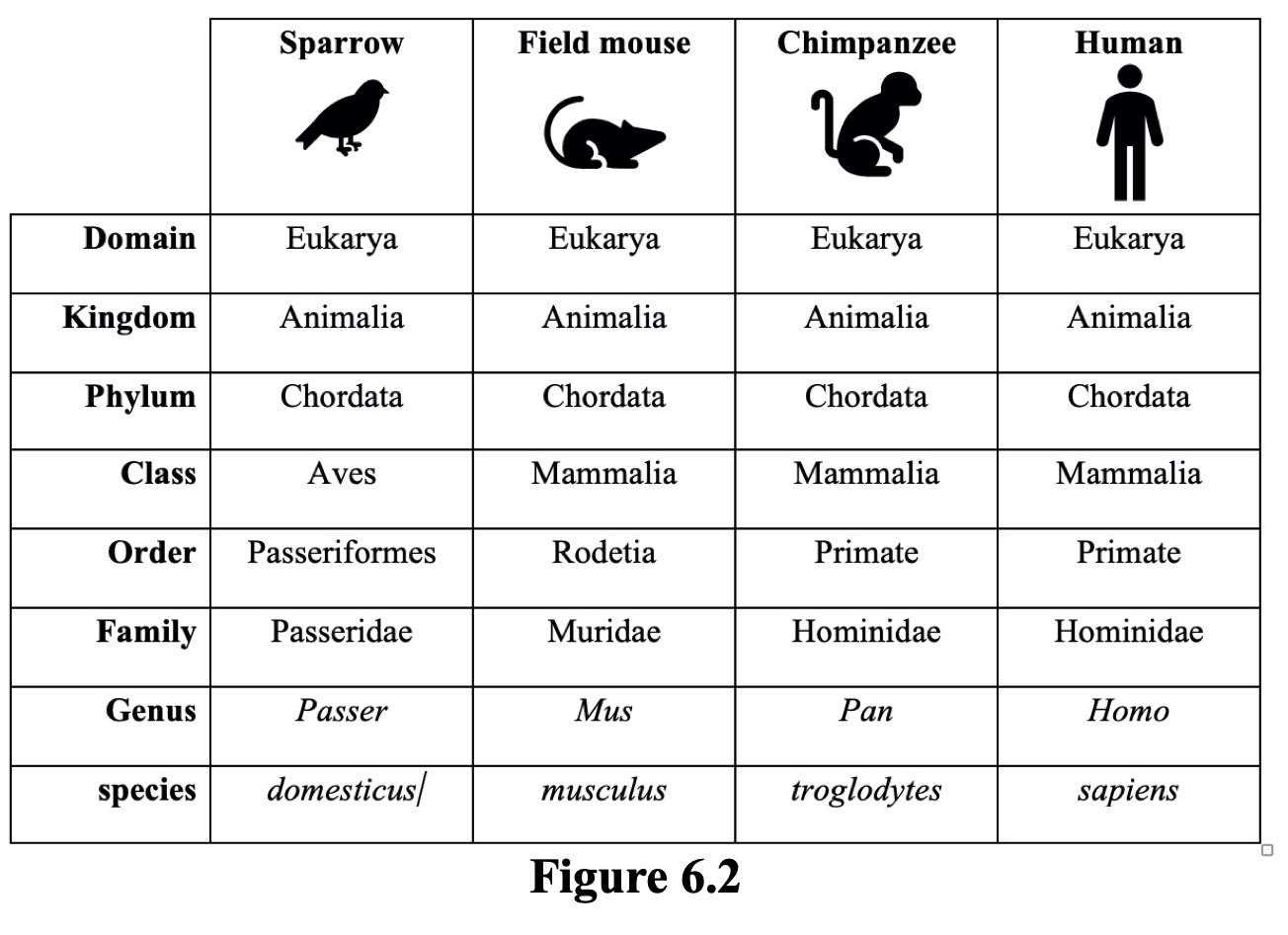 • These are diagrams that show evolutionary relationships between organisms.
• The organisms are shown on the top of the cladogram.
• Along the diagonal line at the bottom are traits that the organisms may share.
• All of the organisms on this branch share one thing in common- they all have a backbone.
• Lungs evolved later. All of the organisms except the fish have lungs.
• The closer two organisms are on a cladogram, the more closely these species are related.
• Figure 6.3 shows the evolutionary relationship between animals with a backbone.
• These organisms, and many not shown, belong to the phylum Chordata and the subphylum Vertebrata
• All chordates contain a structure during embryonic development called a notochord.
• All organisms in the subphylum vertebrata have a backbone.
• The cladogram also shows what all mammals (mouse, chimpanzee and human) have in common; fur and mammary glands to nurse their young.
You will use a DIFFERENT cladogram in your Lab Report to determine how relarted organisms are and some features they may share in common. 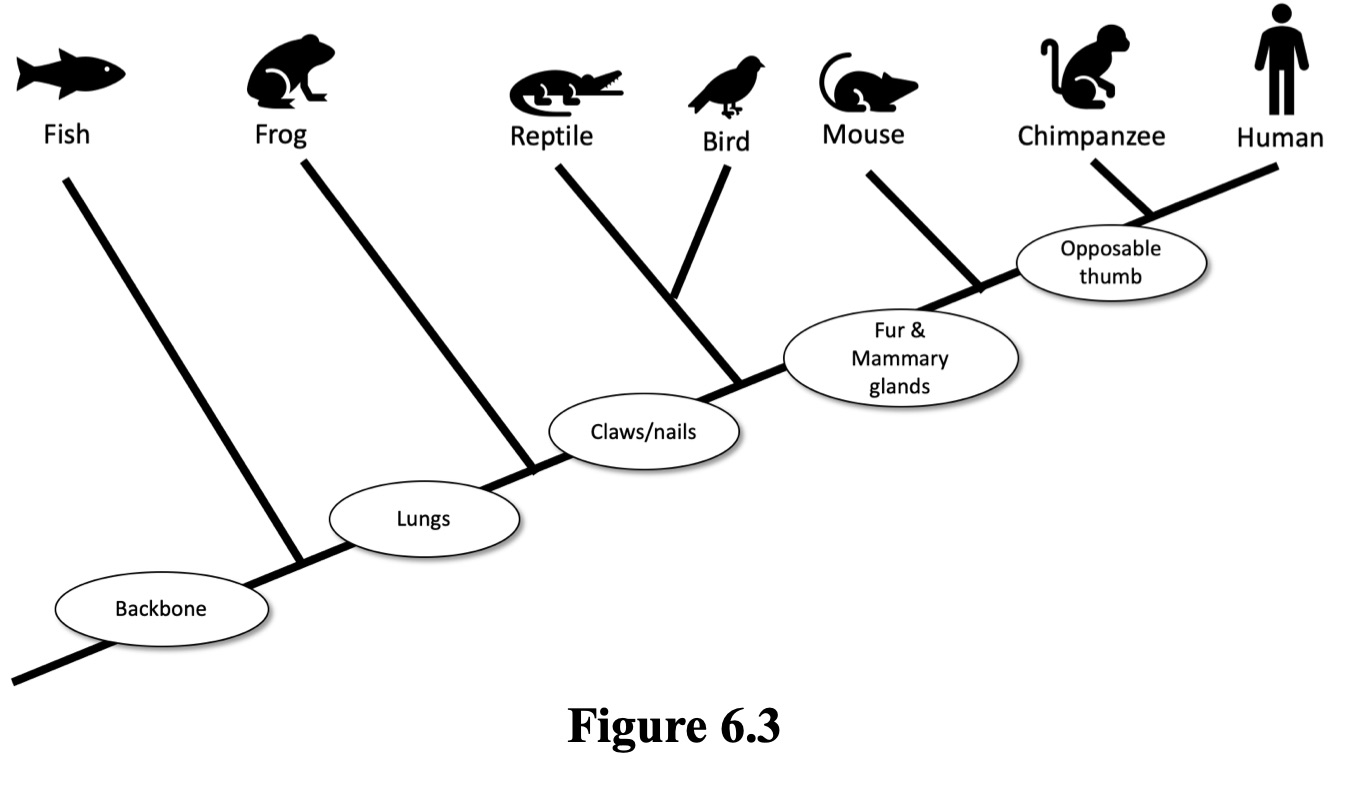 • In addition to classifying organisms, Taxonomists name organisms using a binomial (2 name) system introduced by Carolus Linnaeus.
• Scientists use this system because common names can cause confusion.
• Use the internet to search for the term "squirrel". How many different species of squirrels did you find?
• Now perform the search using the scientific name for the Eastern grey squirrel, Sciurus carolinesis. Only one species of squirrel appears.
• Scientists refer to organisms by their scientific names to avoid confusion and ensure consistency across the scientific community.
• For any species, the scientific name is formed from the two smallest taxa: genus and species.
• Scientific names are always italicized or underlined. The genus name of capitalized and the species name is always lower case, for example Sciurus carolinesis.‍

Diversity and Classification of Organisms in the Domain Eukarya

• In this exercise we will focus on members of the domain Eukarya.
• This domain includes four Kingdoms: Fungi, Plantae, Protista & Animalia.
• You will observe representative organisms within these kingdoms.
• As you are observing these organisms, you will notice a great deal of morphological differences between them.
• Organisms are classified into Kingdoms predominantly by their mode of nutrition.
• Let's look at these 4 Kingdoms in more detail.

• This group is not a true Kingdom because some organisms in this group are more closely related to plants, animals, or fungi than they are to other protists.
• This Kingdom contains all the organisms that don't fit well into any of the other kingdoms.
• Most protists are single celled or a colony of similar cells.
• The systematics of this large, varied group are still being worked out, but in general, protists may ben grouped by their similarities to the other three kingdoms.
• Watch the video to understand this 'Kingdom' better and see some examples of Protists.

• This is a group of organisms that get their energy from consuming other organisms via absorption, meaning they digest their food outside of their body.
• Fungi secret digestive enzymes that breakdown their food externally and the digested material is then absorbed by their body.
• Fungal cells are surrounded by a cell wall made of chitin
• Some fungi, like molds, spend most of their life as single cells.
• Other fungi, like mushrooms, are multicellular.
• Fungi play an important role in an ecosystem, returning organic materials to the soil to be used by other organisms.
• Watch the video to better understand the Kingdom Fungi and to see some examples of Fungi

• These are organisms that can convert sunlight energy into chemical energy in organic molecules like sugar.
• Within the Kingdom, classifications are further made by anatomy and mode of reproduction.
• There are four phyla in the plant Kingdom.
• The lack of a vascular system for transport of water and nutrients from the soil distinguishes the mosses from the more advanced vascularized ferns, conifers and flowering plants.
• The production of a seed further distinguishes those organisms.
• Seedless ferns are distinguished from plants producing a "naked" seed (conifer) and those that produce a "protected" seed (flowering plants).
• Watch the videos to better understand the Kingdom Plantae and see some examples of plants.

• These are organisms that consume other organisms for energy.
• Within this Kingdom there are many Phyla.
• Animals are classified by multiple distinguishing features, including, but not limited to; the symmetry of the body form, the type of body cavity, segmentation, mouth formation during development, and the presence of a spinal cord.
• Watch the videos to better understand the Kingdom Animalia and see some very diverse examples of animals.