You will use DNA Fingerprinting for the next two experiments.
• First you will determine which suspect left their DNA at a crime scene.
• Then you will use it to carry out a paternity test to see who the father of a baby in question is.

• The pattern created by the fragments of DNA (RFLPs) when it is cut by a restriction enzyme are as unique to an individual as a persons fingerprints (that is why it is called DNA 'fingerprinting' even though fingerprints are not involved).
• The RFLP patterns created by cutting the DNA are compared to know sizes of DNA fragments. This is called the DNA ladder.
• Look at the pattern created by the RFLPs on the gel that appears in the image below vb vb.
• The gel contains DNA collected from the crime scene and from 7 suspects. The DNA was cut using the restriction enzyme called EcoRI.
• Compare the pattern of the DNA collected at the crime scene to those collected from the 7 suspects whose DNA was also cut with EcoRI.
• The criminal would have the same RFLP pattern as the one recovered from the crime scene.
• Use the gel below to answer the questions in Part A of the Lab Report. 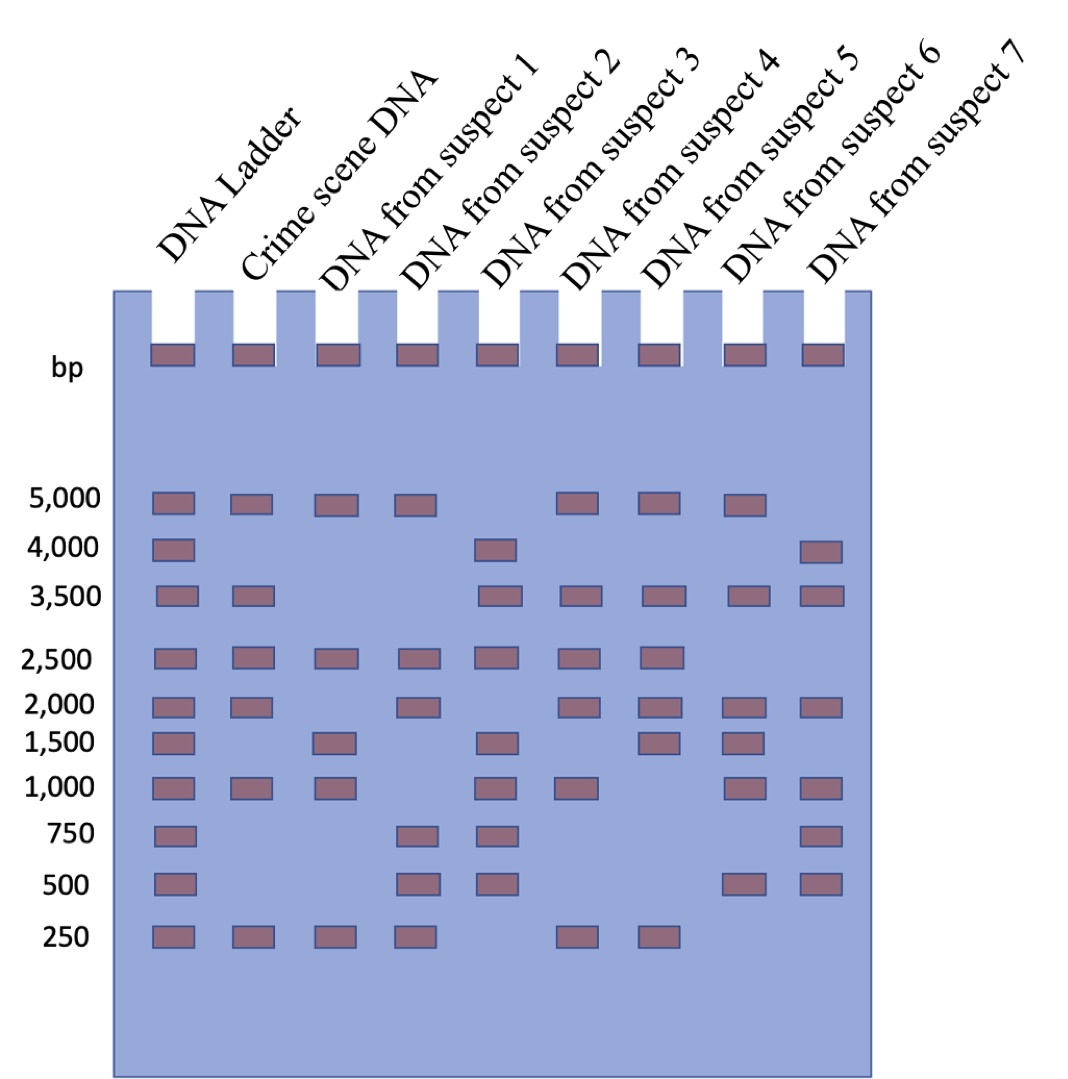 • Notice in the "Crime scene investigation gel" that some of the suspects have RFLPs in common, but only the criminal has the same exact same pattern of RFLPs as the DNA collected from the crime scene.
• You will now create a Gel that shows the results of a paternity test.
• Recall that everyone's DNA is unique. This means that a baby's DNA is different from both of its patents.
• However, since a baby inherits its DNA from both its parents it would also inherit the RFLP cut sites from its parents. Some of these cut sites are inherited from its mother, the rest are inherited from the father.
• Look at the DNA from the mother and the baby already filled in on the Gel in the Lab Report. Notice that the mother and baby share some RFLPs but not others. The cut RFLPs would have come from the father.
• To determine the father here are some rules; the father cannot have any RFLPs that the baby doesn't have  AND the father must provide the RFLPs that the mother didn't provide.
• Follow the steps below to determine the bands for 4 possible fathers and determine which of the four is the actual father.

1. Working in groups of 4 use the DNA sequences provided at the end of the Lab Report to determine who the father is. Cut the sequences into 3 strips. Tape the end of the strips in increasing order (1st, 2nd, 3rd), being sure to keep the base letters evenly spaced where the strips meet. Each member of you group should select a different DNA sequence to work on. If there are only 3 people in your group all of you will have to work together on one of the sequences.
2. Now look at the EcoRI restriction model provided below. Look at the upper line of code in the DNA sequence and note the GAATTC sequence there. The Eco RI enzyme cuts between the G and the A on the top, A and G on the bottom and horizontally between the two cuts. Now look at your assigned DNA sequence and look for the GAATTC restriction site. Mark every area to be cut with a pencil. Don't actually cut until your instructor verifies that you have made the pencil mark in the correct locations.

3. Now cut the DNA sequence into RFLP's using a scissor.
4. You will end up with several RFLPs of different lengths. Count the number of bases on the top row only of each of the RFLPs and shade in the appropriate box on the "Gel Electrophoresis" in Part A of the Lab Report. For example, if you have a fragment that has 10 bases on the top row, share in the area next tp the number 10. Note that the shortest fragments are at the bottom of the gel.
5. Now shade in the RFLPs from the other members of you lab group.
6. Determine which male is the father.

• Answer questions in Part A of the Lab Report.

• Complete Table 5.1 in your Lab Report by filling in your phenotype (physical appearance) and your genotype (pair of alleles) for each trait.
Since you cannot do a genetic test right now, if you have the dominant phenotype, you should include both possible genotypes (the homozygous and heterozygous genotypes).
Example 1- Phenotype: Able to roll tongue. Genotype RR (homozygous dominant) OR Rr (heterozygous):
Example 2- Phenotype: unable to roll tongue. Genotype: rr (homozygous recessive).
In the space provided in the Lab Report estimate the inheritance of your trait following Mendelian genetics. If your genotype is dominant, assume you are heterozygous for this exercise.
Complete questions in Part B of the Lab Report.‍

Click here for help on how to fill in table 5.1 Click here if you need help completing the Punnett Squares

Your instructor has injected sea urchins with potassium chloride (KCl). This solution will cause the urchins to release their eggs or sperm cells. Since the sea urchins utilize external fertilization in their aquatic environment they do not have copulatory organs to distinguish males from females. Sex of the se urchin can only be determined by examining the gametes they release following KCl injection. The smaller sperm cells appear white while the larger egg cells appear yellow, orange or red (depending on the species).

1. Place a drop of sea urchin egg cells, diluted with sea water, on a depression slide. Do NOT use a cover slip. Be careful of the objective lens. DO NOT GET IT WET.
2. Determine the total number of eggs on the slide. How many of those eggs are mature? immature?
3. With the low-power objective in focus, move it slightly to one side and add a drop of living sperm cells to the original drop of of egg cells. A small amount is sufficient.
4. Correctly re-align the low-power objective lens and immediately observe the cells. You may have to reduce the light to see the rapidly moving sperm cells.
5. If you do not see fertilized eggs (visible by the thin fertilization membrane "halo" surrounding the egg, try a fresh drop of sperm.
Complete Part C of the Lab Report.