Learning Objectives
In this lab students will:
- Describe the uses for DNA fingerprinting.
- Determine the parents of a baby using DNA fingerprinting
- Determine the criminal at a crime scene.
- Determine your possible genotype for several Human Mendelian traits.
- Use Punnet squares to predict the outcome of crosses based on your genotype and a genotype provided.
- Observe fertilization of a sea urchin eggs.
- Observe, compare and contrast fertilized and non-fertilized sea urchin eggs and recognize a two-celled embryo.

• Everyone’s DNA sequence is as unique as their fingerprints.
• This can be used to determine if a suspect committed a crime (if they left some DNA behind) or who the biological parents of a baby are in paternity testing.
• Watch the video to learn more about DNA fingerprinting.

• DNA fingerprinting requires 2 tools;
• One tool, called Restriction enzymes are needed to cut the DNA into a unique set of fragments, called RFLPs (Restriction Length Polymorphism). These can be thought of as molecular scissors.
•The second tool is needed to separate and visualize the RFLPs. This tool is called Gel electrophoresis.
• Let’s look at these tools in more detail.
• Restriction Enzymes
• Restriction enzymes are found in bacteria and archae. They provide a defense mechanism against invading viruses.
– They cut DNA at a particular location in a DNA sequence.

• The resulting cut pieces of DNA are called Restriction Length Polymorphisms (RFLPs)
- Restriction – because they are the result of being cut by a Restriction Enzyme.
- Polymorphism  means many forms- we all have different places in our genome there these sites will be    found, but we all have them.

• Gel Electrophoresis
• This is a method used to separate and visualize the fragments of DNA created by the restriction enzymes.
• The fragments are separated by size with the smaller fragments at the bottom. 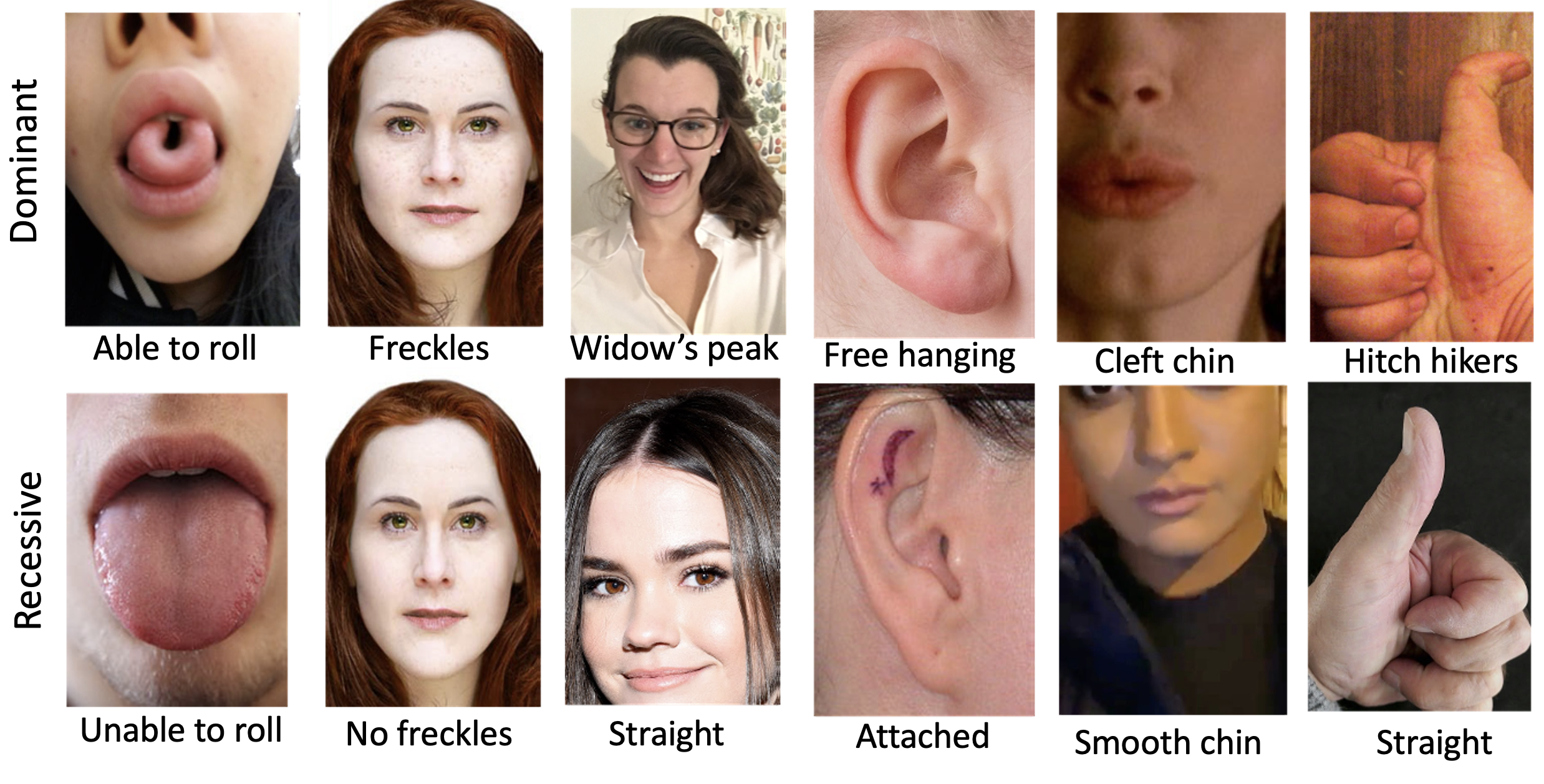 • Genotype and Phenotype are closely related, but they are not the same thing!
• Phenotype is the outward appearance determined by an individuals genotype. For each of these examples there are only 2 possible phenotypes.
• Genotype is the set of alleles (versions of a gene) that an individual carries. There are always only 3 possible genotypes - homozygous dominant (DD), heterozygous (Dd) or homozygous recessive (dd).
• Example: If an individual can roll their tongue their phenotype is "able to roll". Since this is the dominant phenotype there are 2 possible genotypes (RR or Rr).
• When you have the dominant phenotype your genotype can either be the homozygous dominate (RR) or heterozygous (Rr) genotype.
• As long as you have at least one capital letter (which represents the dominant allele) in your genotype you have the dominate phenotype.
• NOTE - if the individual had the genotype rr they would have the phenotype of "unable to roll".

• Living things are made up of cells and new cells arise from division of previously existing cells (Cell theory).
• Mitosis, followed by cytokinesis (division of the cytoplasm), gives rise to daughter cells that are genetically identical to each other and the original parent cell.
• Mitosis, or asexual reproduction has the advantage of being an extremely efficient form of reproduction.
• There is no time spent finding and courting mates, and no energy wasted fending off rivals.
• Each new individual is an exact replica of its parent cell.
• However, there is no genetic diversity.
• Natural selection acts on genetic variations in a population. So genetic diversity is beneficial to a species.
• Random mutations can occur, but not quickly.
• Asexual reproduction is used by multicellular organisms to grow and replace damaged, old cells.
• Sexual reproduction occurs when cells, called gametes, from 2 individuals are joined to produce offspring that are genetically different from their parents.
• This greatly increases genetic variability in a population. This is the reason we all look different.
• Sexual reproduction requires that cells undergo a special type of division called meiosis.
• Only certain cells, gametes (sperm in males and eggs in females) undergo meiosis. 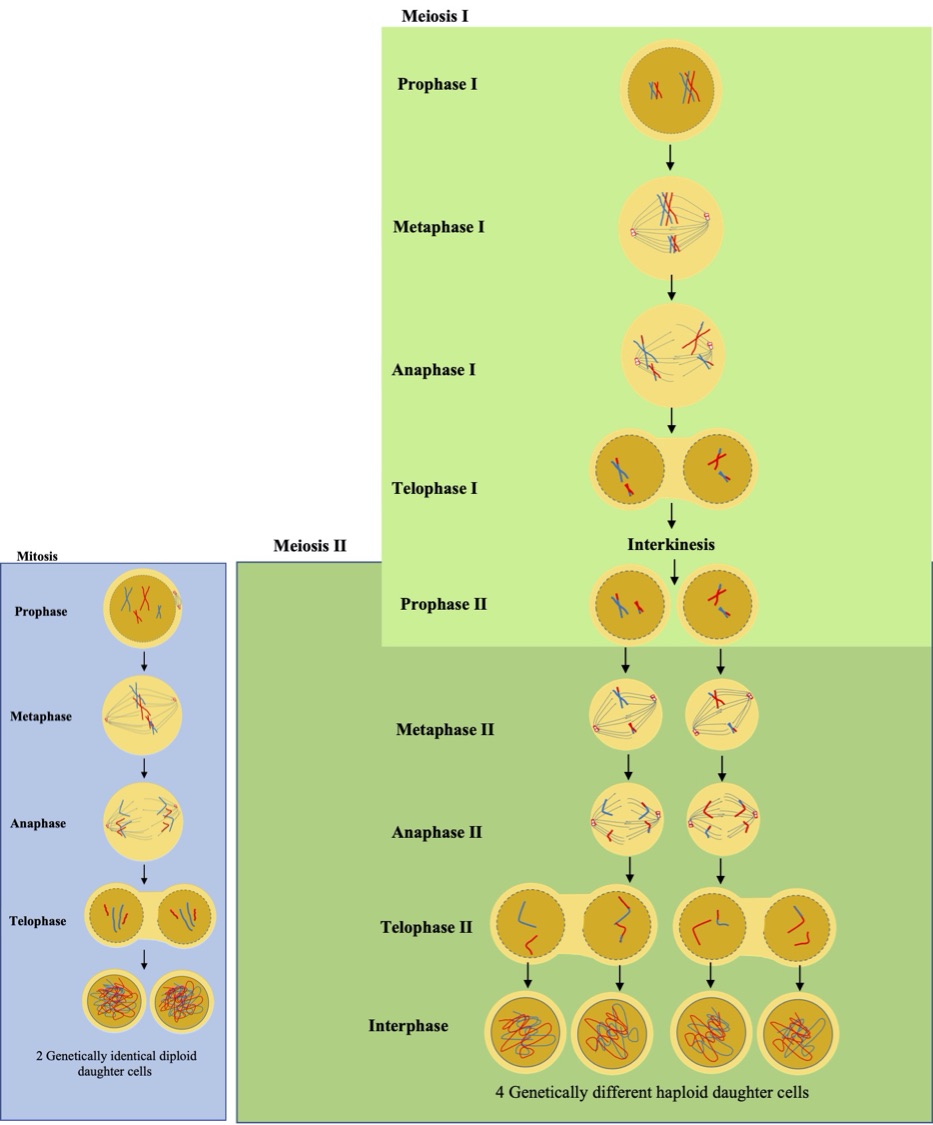 ‍Meiosis
• The process that produces haploid gamete cells. Haploid cells have half as many chromosomes as the parent (diploid) cell.
• Gametes are genetically distinct from BOTH the parent diploid cells that produced them and different from each other.
• Gametes are produced in organs called gonads (testes and ovaries) though meiotic cell division.
• Review the image below to see the differences between Mitosis and Meiosis.
• NOTE that there are 4 stages of Mitosis (prophase, metaphase, anaphase and telophase). At the end of Mitosis there are 2 diploid daughter cells that are genetically identical to each other and the original parent cell.
• In Meiosis there are two rounds of division (Meiosis I in which homologous chromosomes separate, and Meiosis II, in which the sister chromatids separate). Each of these rounds has the same 4 stages as mitosis.  The result of Meiosis is 4 haploid cells that are genetically different from each other and from the original diploid parent cell.

Fertilization of Sea Urchins
• Fertilization is the process that occurs when haploid gametes fuse to produce a new, genetically unique, diploid organism.
• In some organisms, such as humans, fertilization occurs internally, inside the female individual.
• In other organisms, such as sea urchins, fertilization is external and is therefore much easier to observe.
• Injecting sea urchins with potassium chloride (KCl) induces smooth muscle contraction. When the smooth muscle surrounding their gonads contracts it causes them to release their gametes.
• The sex of the sea urchins can only be determined by observing the gametes that are released.
- a milky white secretion is released from males.
- larger yellow, red or orange (depending on the species) eggs are released from the females. 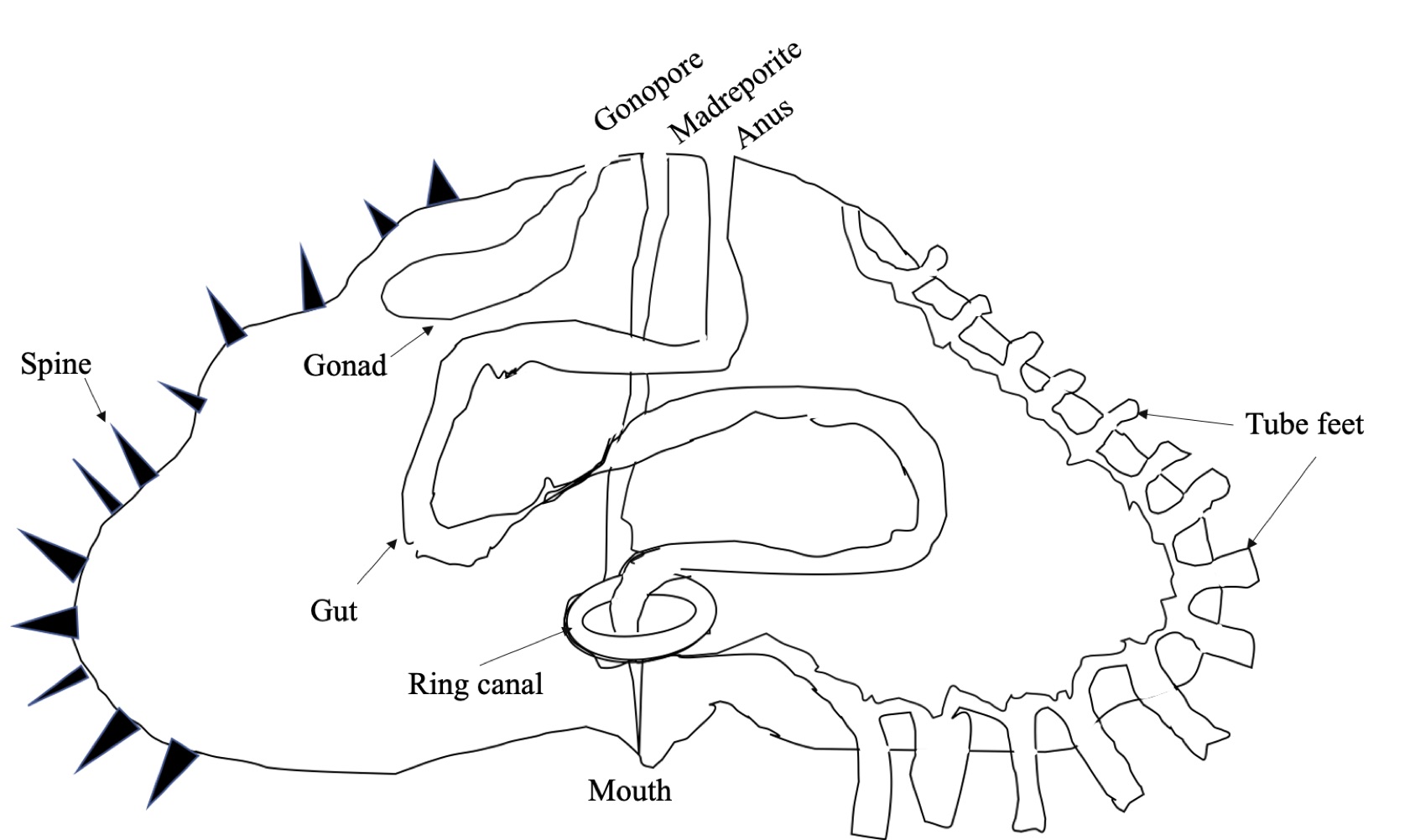 Sea Urchin Anatomy
• Sea urchins are covers in sharp spines to protect them from predators.
• The lower surface, containing the mouth, is referred to as the oral surface.
• The mouth contains teeth that the sea urchins use to scrape food off rocks and pilings.
• The upper surface is referred to as the aboral surface.
• The aboral surface contains a few openings including the anus, the gonopore, and the madreporite.
• The gonopore is the opening through which the sea urchins release their gametes from their gonads.
• The madreporite is an opening where sea water enters in to their water vascular system. Water enters into the Ring canal and is distributed via ampullae (not shown) into individual tube feet.
• The tube feet allow the sea urchin to move and suction tightly to a surface.

Watch the video to see how sea urchin spawning is induced in the lab and how you can distinguish males from females. 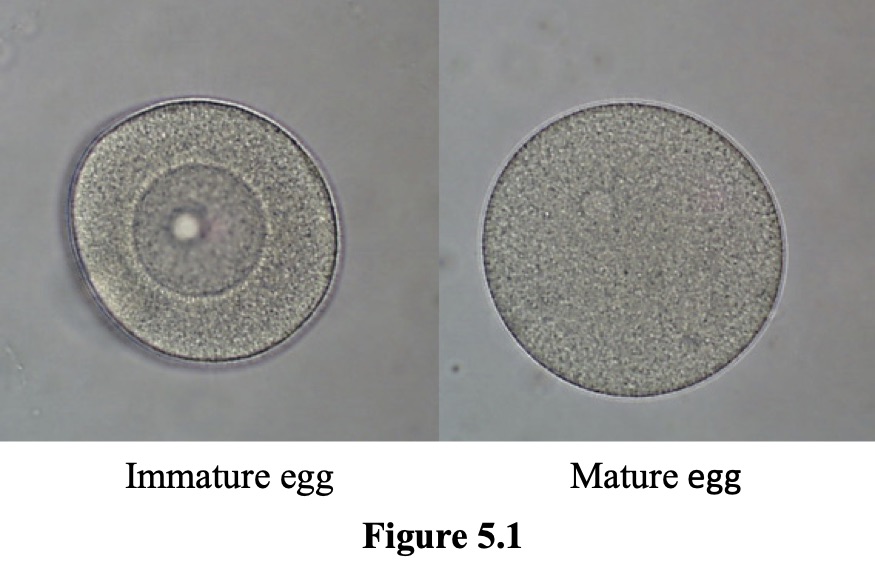 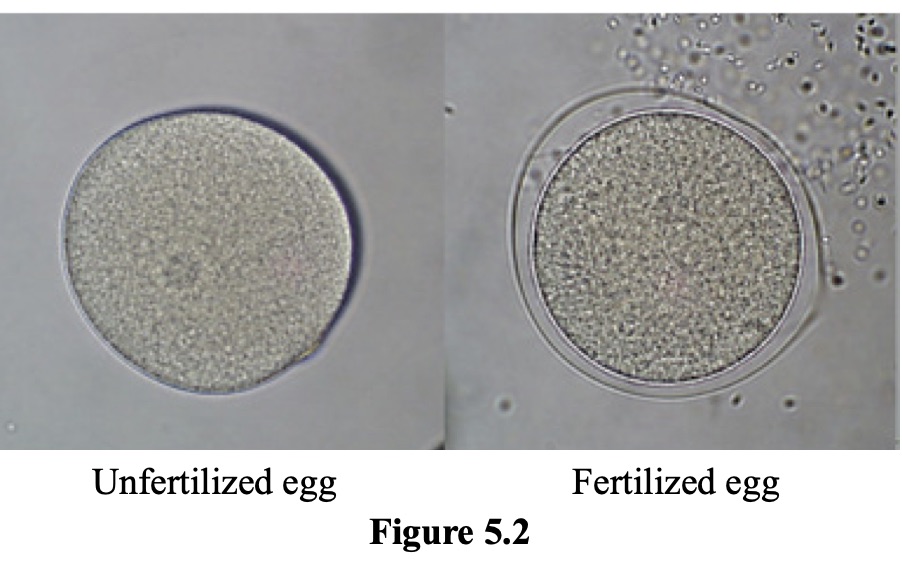