Learning Objectives
In this lab students will:
- Learn how to use the microscope to observe cells from multicellular organisms.
- View and compare prepared human and frog blood smears.
- Identify the 4 stages of mitosis in a magnified onion root tip.
- View magnified cells of the aquatic plant Elodea before and after undergoing plasmolysis. 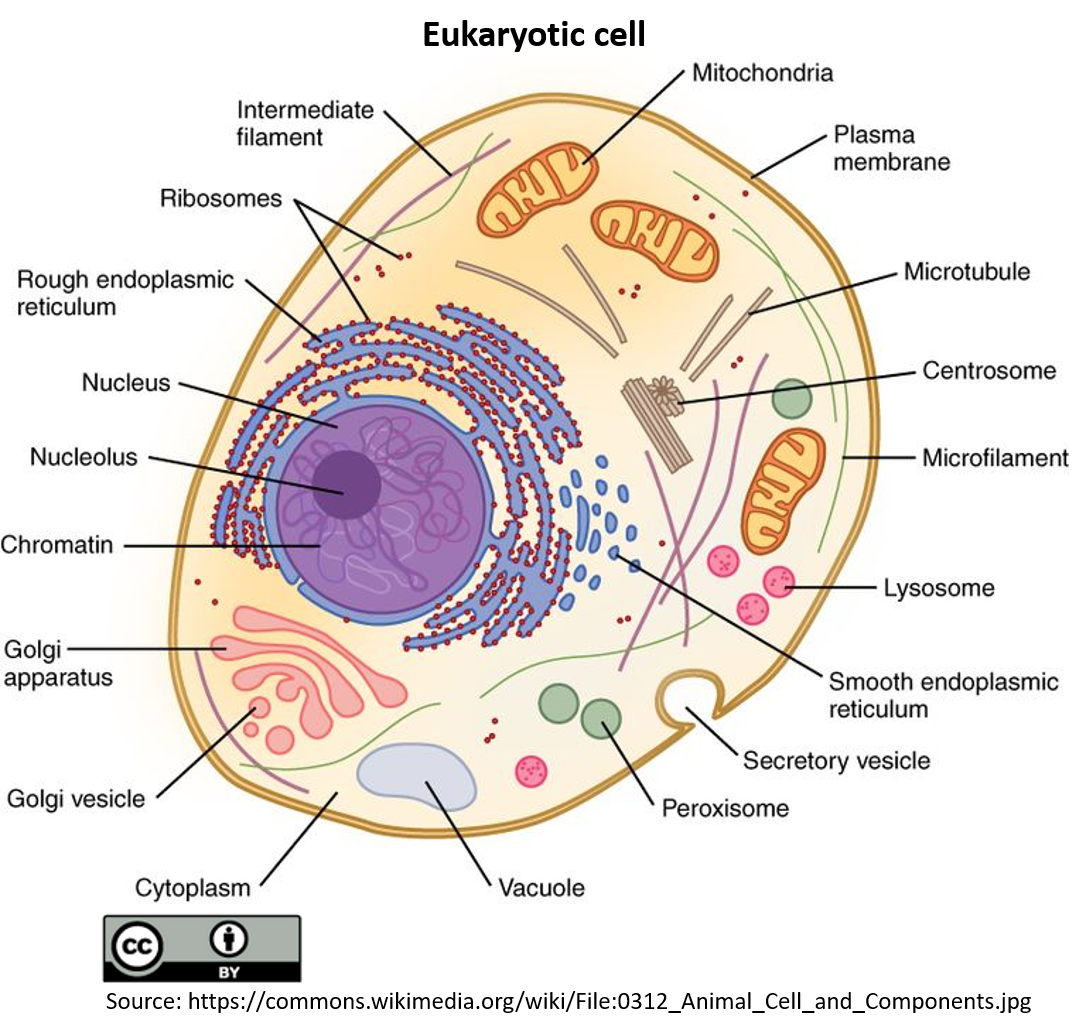 This figure shows the organelles found in a typical animal cell.
• The nucleus stores the DNA and is surrounded by a double membrane called the nuclear envelope.
• Inside the nucleus is one or more darker staining regions. This is the nucleolus, the site where ribosomes are made.
• The endoplasmic reticulum (ER) is a membranous organelle that may have ribosomes associated with it (rough ER) or no ribosomes associated with it (smooth ER). • The rough ER is the site for the synthesis of proteins that will leave the cell to carry out their functions elsewhere.
• The smooth ER is where lipids are made.
• The Golgi complex is a collecting, packaging and sorting center for the cell. Materials made by the cell and destined for use outside the cell are processed and modified in the Golgi complex.
• Lysosomes are sites where large macromolecules or worn out organelles are broken down.
• The mitochondria are the organelles where responsible for making energy (the mighty mitochondria). When cells receive nutrients from their environment, the mitochondria convert the potential energy in the nutrients into a form that can be used by the cell to carry out its functions.
• Chloroplasts (not shown in the image because they are only found in plant cells and some protists) are organelles responsible for converting energy from the sun into chemical energy that plants and other photosynthetic organisms can use to drive the synthesis if glucose. Chloroplasts are found in photosynthetic cells.

• In this exercise you will investigate the structures of the various multicellular eukaryotes: human cheek epithelial cells, human and frog blood cells, cells of an aquatic plant, Elodea, and actively dividing cells from an onion root tip. 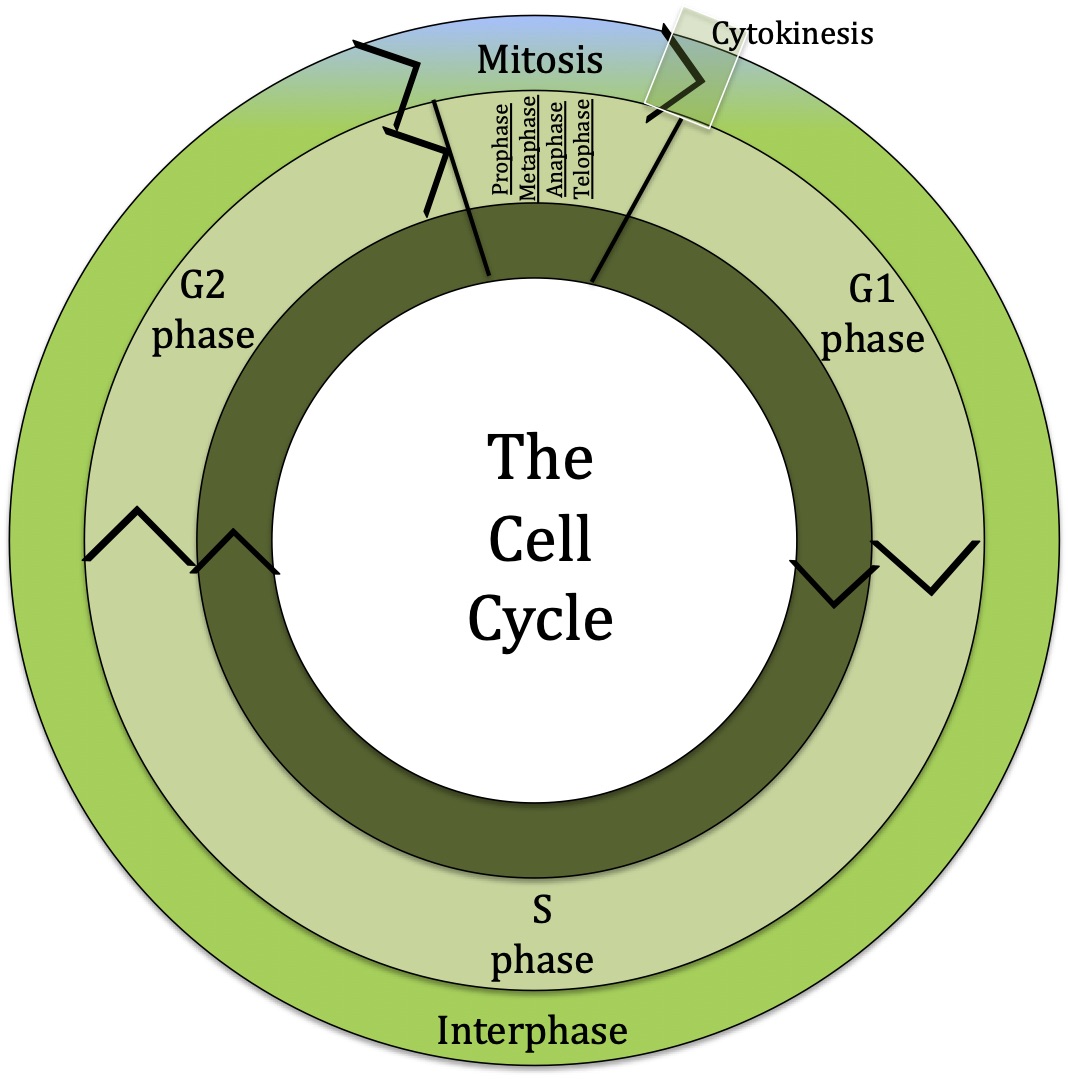 • The cell cycle diagram shown here depicts the life cycle of a cell. As the diagram shows, the majority of the cell's life is spent in interphase. This phase is subdivided into three phases: G1, S and G2. During G1 phase the cell grows larger (G stands for "gap", but you can think of it as 'growth").
‍• During S phase the DNA copies (replicates) itself (S stands for synthesis, a new copy of DNA is being synthesized).
‍• Finally, in the G2 phase the cell prepares to divide by mitosis.

Mitosis
‍• Mitosis, which is the division of the nucleus to produce two diploid nuclei, occurs after interphase.
‍• Prophase, metaphase, anaphase and telophase are the 4 phases of mitosis. Each phase can be identified by observing unique changes in the chromosomes.
‍• This is an image of a dividing animal cell. You will need to become familiar with what is happening at each stage of mitosis and be able to distinguish cells that are in each stage of mitosis from those in interphase for this lab.
‍
‍• Prophase: The nuclear envelope disappears and the chromosomes condense. The spindle apparatus begins to form; the chromosomes, composed of two sister chromatids become condensed.
‍
• Metaphase: The chromosomes line up at the equator of the cell, called the metaphase plate. Both plants and animal cells form spindles, but only animal cells have centrioles.
‍
• Anaphase: The chromatids are separated and move to opposite ends of the cell.
‍
• Telophase: The nuclear envelope reforms around each cluster of chromosomes. Spindle fibers and centrioles disappear. Chromosomes begin to uncoil, and cytokinesis soon follows to divide the cytoplasm.

‍• In this lab you will complete several activities to study the structure of cells and the processes that occur in them. These include identifying the phases of mitosis in a magnified onion root tip.