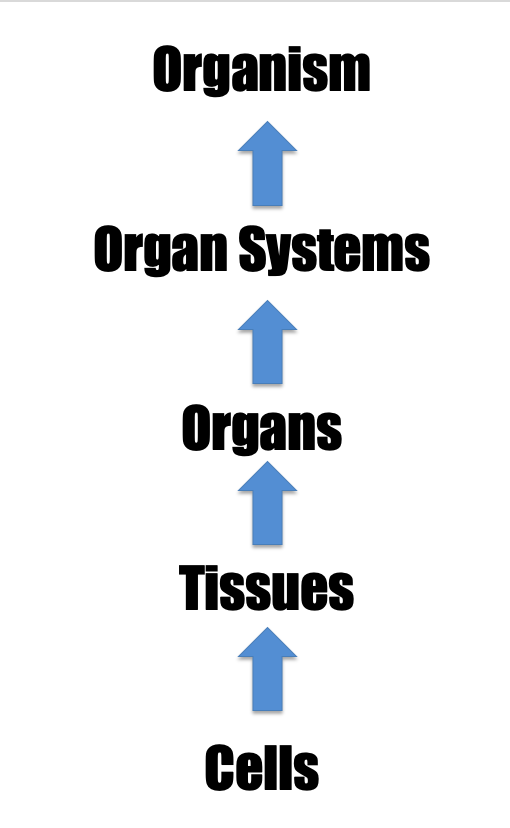 • All living things are composed of one or more cells.
• As we have seen during the semester, some organisms consist of a single cell like bacteria and most protists.
• Other organisms are composed of many cells that function together.
• These last three labs will focus on multicellular organisms. More specifically these labs will focus on animals in the class Mammalia.
• There are different levels of complexity that we can arrange the components of a multicellular organism into.
• Cells – are the basic structural and functional unit of life.
• Tissues - are groups of similar cells that perform the same function for an organ.
There are four types of tissue: epithelial tissue, connective tissue, nervous tissue and muscle. These are discussed in more detail in the lecture.
• Organs - Contain two or more types of tissue that work together to perform a specific function. Examples of organs in humans include the stomach, heart, lungs and liver.
• Organ Systems - are a group of organs that work closely together to perform a complex, integrated process.
• It is not uncommon for an organ to belong to more than one organ system (Example - the pancreas has functions in both the digestive system and the endocrine system).

• Pigs are a commonly dissected organism in biology labs for many reasons.
• Pigs, like humans, are mammals having hair on their bodies and mammary glands to nourish their young.
• The fetal pig is used because of the similarities between pig and human organ systems.
• The pig, like the human, is adapted for processing a variety of foods.
• The digestive system consists of the same set of organs and accessory organs responsible for moving food in a continuous process from mouth to anus.
• However, there are some anatomical differences, the pig lacks an appendix. In pigs the large intestine (or colon) is arranged differently than it is in humans.
• In this exercise you will  become familiar with anatomical terms, the external anatomy of a fetal pig and the digestive system.

These are terms used to precisely describe the positions of structures relative to other structures or locations in the body.
When being told where to locate a structure these terms will be used.

• Anterior  - means coming first or toward the front end; in the pig (or any animal that walks on all 4 legs) this means closer to the head or cranial area. In humans (or any animal that walks on 2 legs) means the ventral or belly surface, since this comes first.
• Posterior - means coming last or toward the hind end; in the pig this refers to nearer the caudal or tail end, in humans this refers to the dorsal, or back side.
• Dorsal – toward the back.
• Ventral – toward the belly or underside.
• Superior – toward the upper surface; in pigs this is also the dorsal or back, in humans it is towards the head.
• Inferior – toward the lower surface; in pigs this will be towards the belly or ventral surface, in humans it is away from the head.
• Medial – toward the midline or center of the body.
• Lateral – toward the sides; away from the center of the body.
The next two terms are only used for appendages (arms, legs or tail)
• Proximal – closer to the trunk.
• Distal – farther from the trunk.
• It is also important to note that when we discuss LEFT and RIGHT we are discussing the subjects left or right. this is most often the reverse of your left or right. This may seem confusing at first. However, it is important that we have a standard for left and right. If I am standing at the head of a patient and you are standing at their feet and we need to amputate their left foot - we better both be amputating the same foot!

External Anatomy of the Fetal Pig 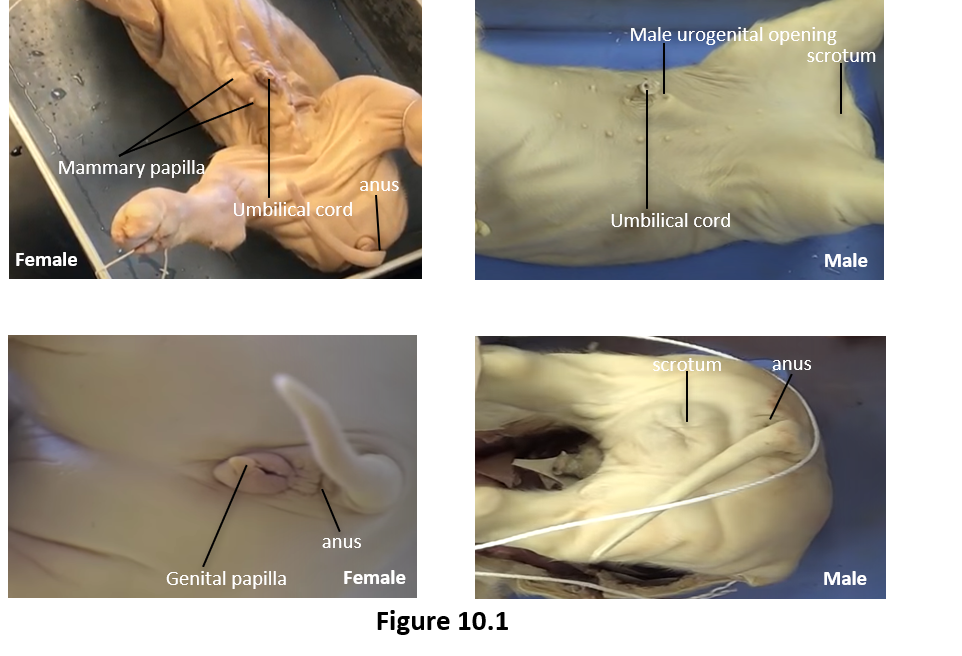 • To determine the sex of the fetal pig, first locate the anus which is located ventral to the tail.
• If the fetal pig has a small opening just ventral to the anus, and a fleshy protuberance just above the opening, then the pig is a female.
• If the fetal pig has an opening just posterior to the umbilical cord and a sac-like scrotum near the anus, the pig is a male.
• Use Figure 10.1 to help you distinguish the sex of a pig.
• Note that both male and female pigs have  one urogenital opening and one anal opening.
• The urogenital opening is a common opening for the urinary system and the reproductive system.
• Also note that both male and male pigs have mammary papilla. 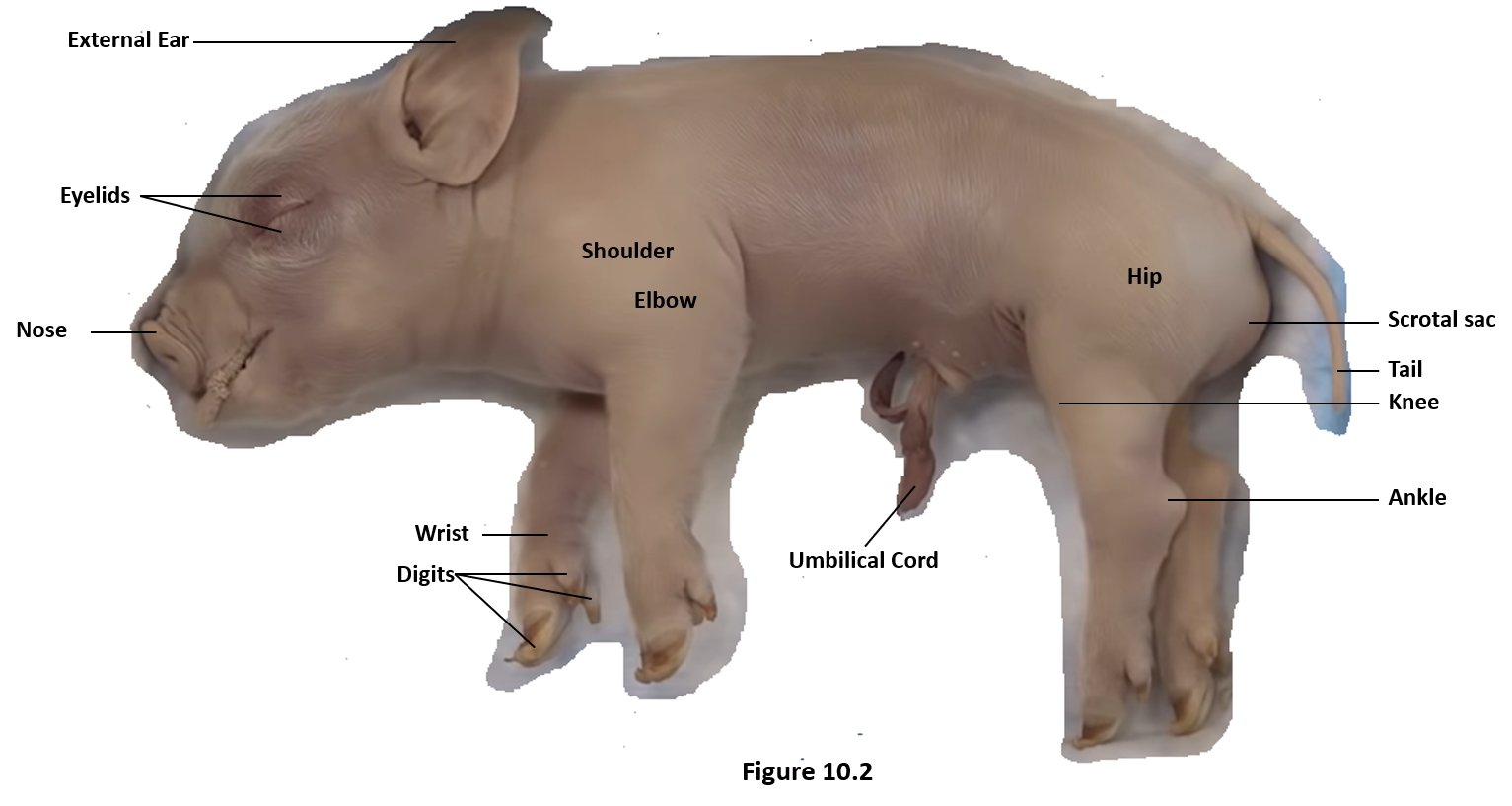 • On the head of the pig there are external ears or pinnae. These help the pig hear by focusing sound into the middle ear.
• On the pigs snout there are external nostrils or nares. The snout is specially designed with a round disk of cartilage on its end to help the pig dig in the ground in search of food like roots and truffles.
• On the chin there is a small tuft of sensory hairs called vibrissae. These help them feel around in the dark.
• On the pigs ventral surface is the umbilical cord. These are fetal pigs so they still have this fetal structure.
• Within the umbilical cord there are 3 blood vessels; 2 small umbilical arteries that carry blood containing waste from the fetus to the placenta and one large umbilical vein, which carries oxygen and nutrients from the placenta to the fetus.
• Use Figure 10.2 to help you locate the external anatomical structures including the elbow, wrist, knee and ankle. 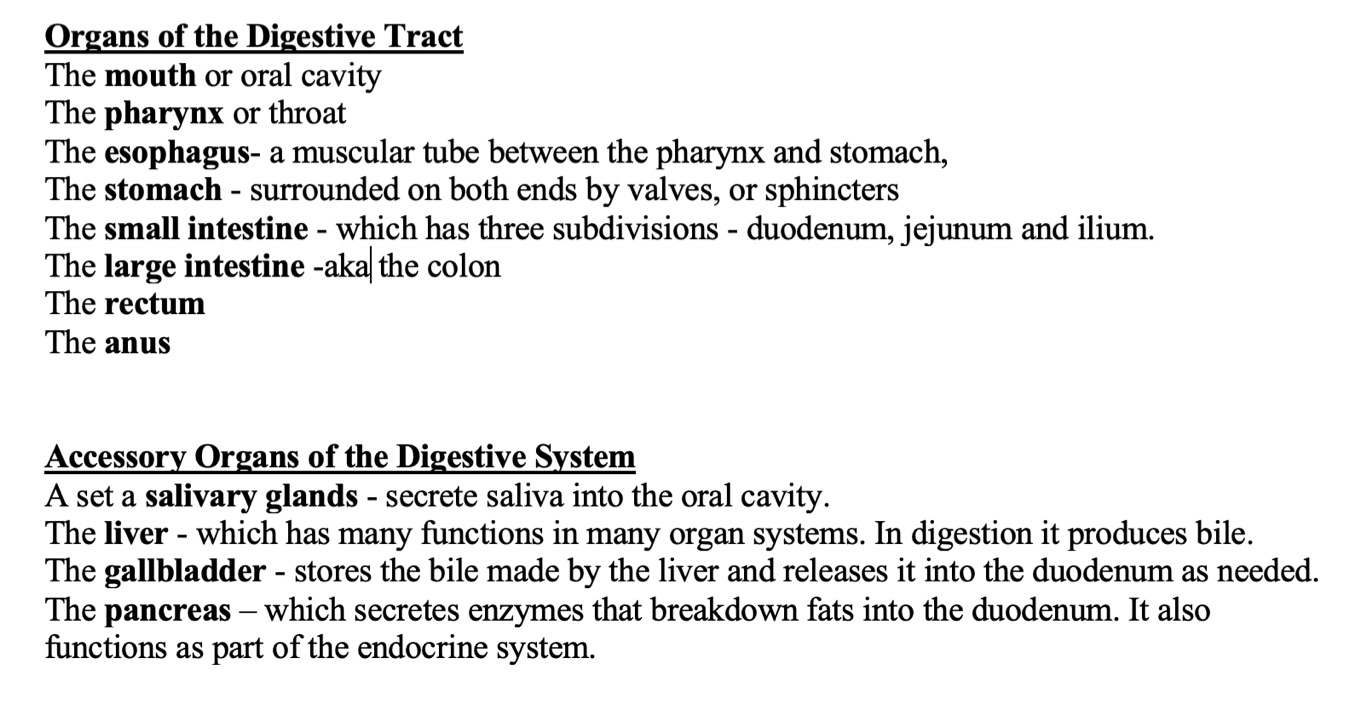 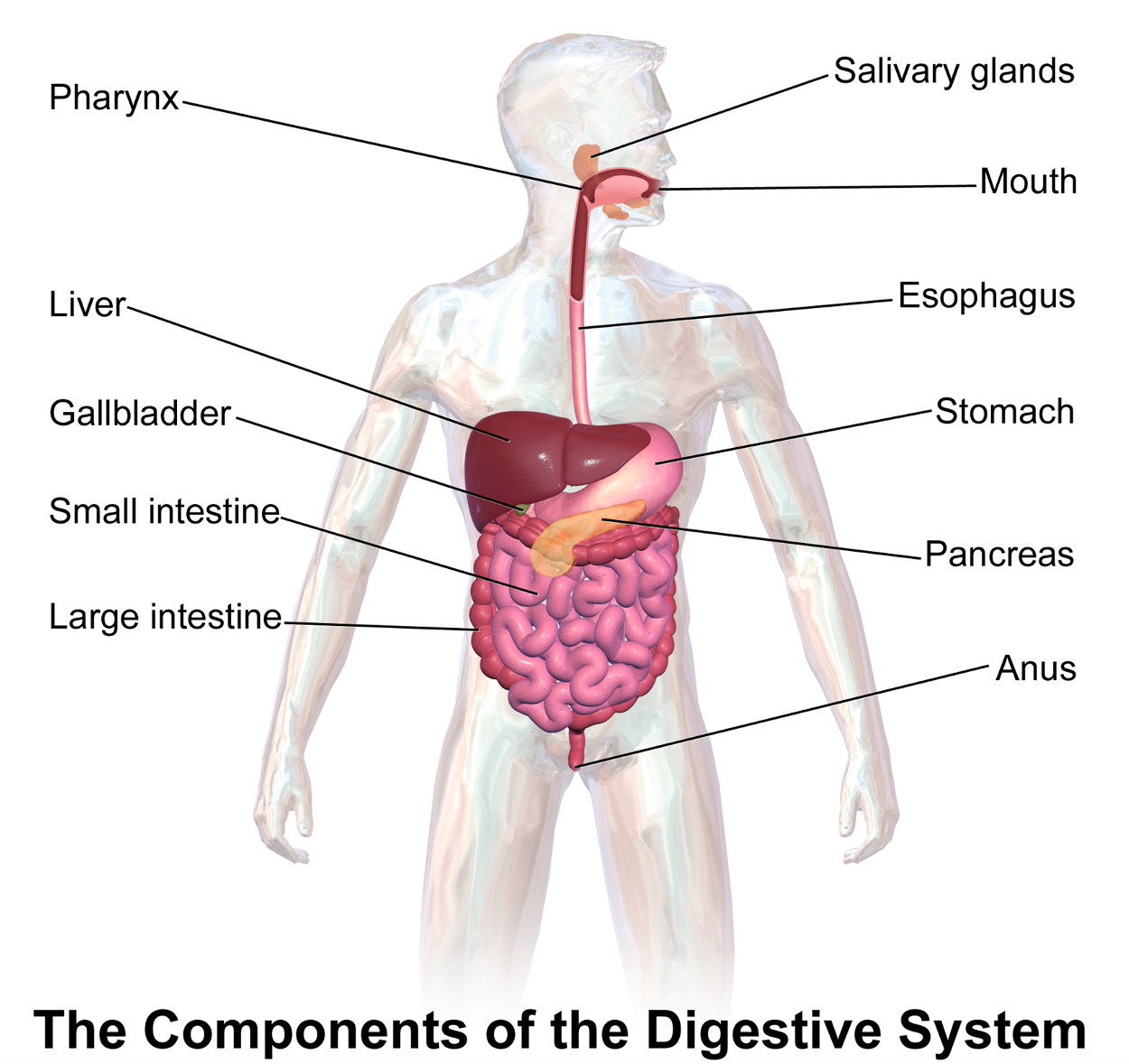 Quick overview of the Digestive Tract
• Food first enters the digestive tract through the oral cavity (mouth). As the food is swallowed in passes into the pharynx (throat) and then down the muscular esophagus and into the stomach. After the stomach it enters into the small intestine (small in diameter but very long). The small intestine has 3 regions: the duodenum, jejunum and the ileum. What has not been absorbed into the body by this point will enter into the large intestine (large in diameter, but shorter in length). Another name for the large intestine is the colon. The remaining undigested material then enters into the rectum and then exits the body via the anus.
• Now lets look at what happens to the food as it passes through each of these structures in more detail.

Digestion from the Mouth to the Stomach 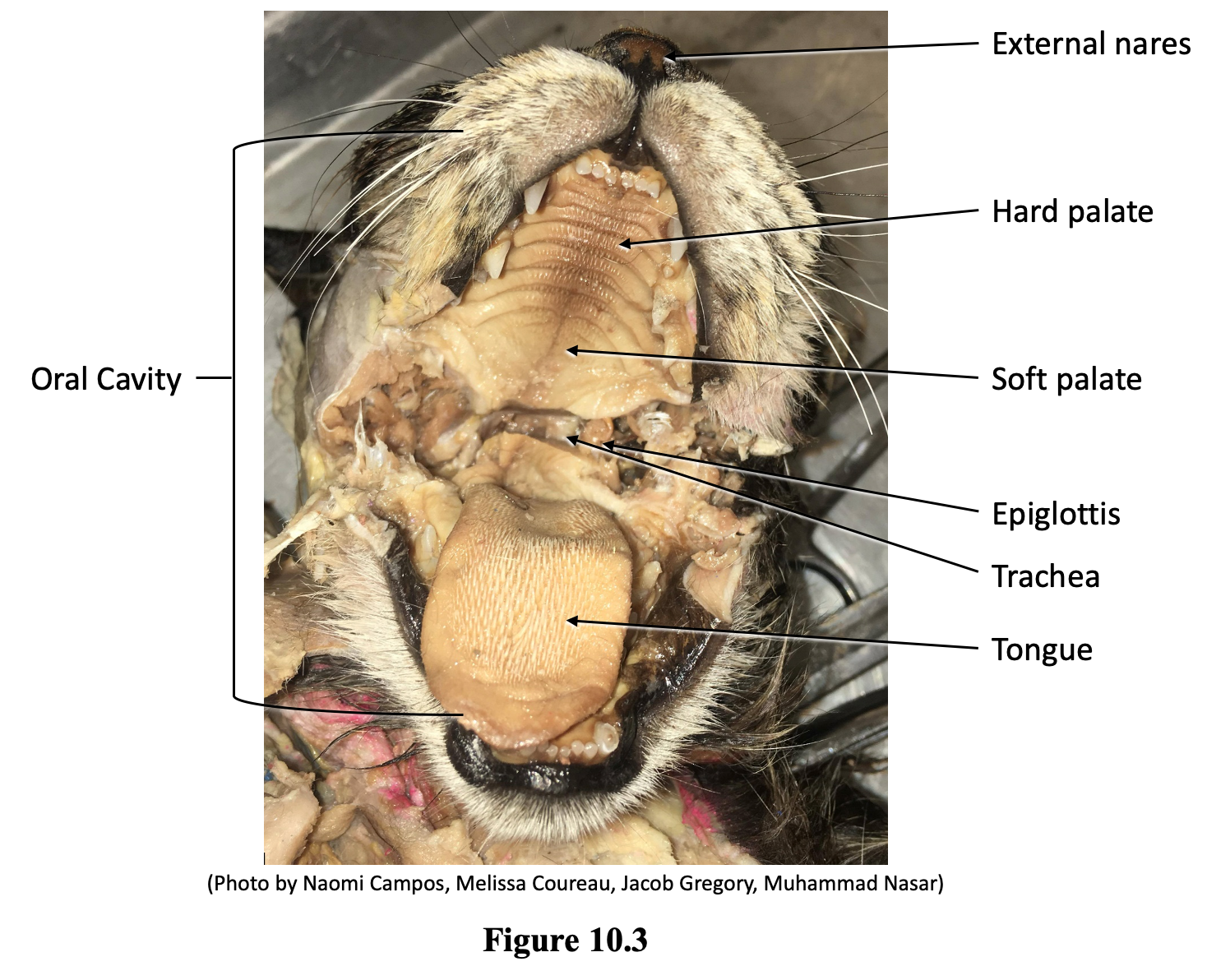 • Digestion begins with the mechanical grinding of food by teeth in the mouth and the chemical breakdown of starch in foods by enzymes in saliva secreted by salivary glands.
• With the help of the tongue the bolus (the soft mass of food) is moved to the pharynx and then to the to the stomach via the esophagus.
• In the stomach food is mechanically churned and chemically broken down further by the action of acids and enzymes.
• The acids and enzymes here start the digestion of proteins.
• The acid in the stomach also protects the body against bacterial invasion.
• The main function of the stomach is to store food for a brief time and move it into the intestines in small amounts after it is liquefied. 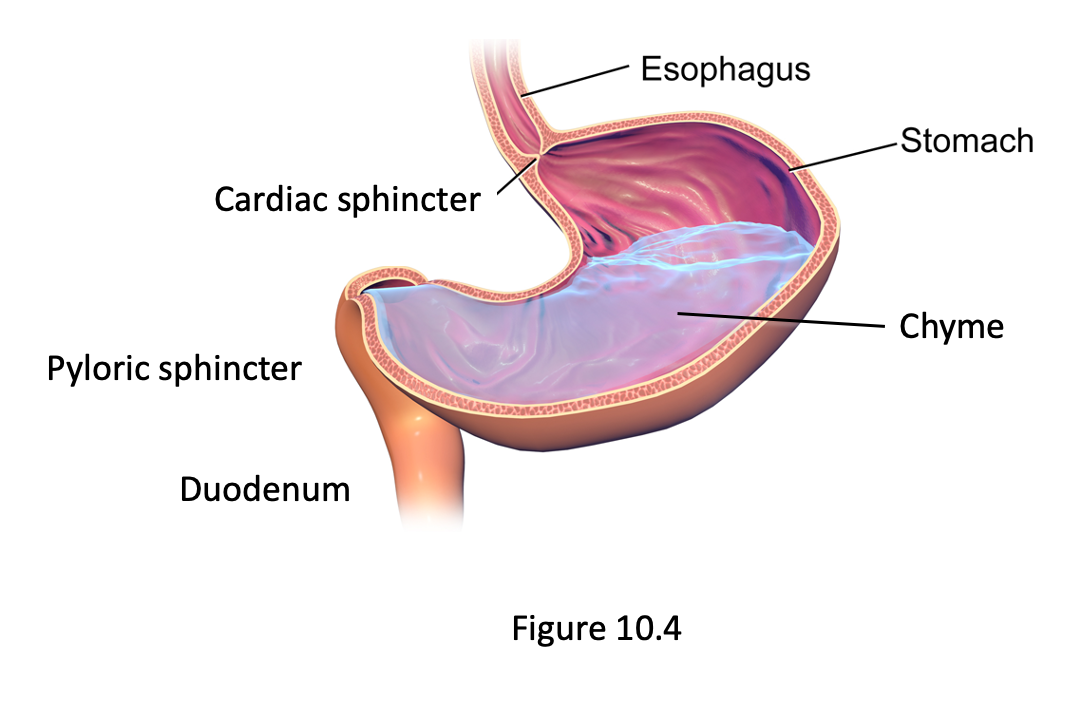 • Peristalsis is the waves of smooth muscle contraction that move food through the digestive tract. In the stomach it is used to mix the enzymes and acid with the food and move a small amount of chyme (the liquified, acidified mass of food) into the small intestine.
• Movement of food out of the stomach is regulated by the pyloric valve (located between the stomach and the duodenum).
• Food is prevented from moving back up into the esophagus by another valve called the cardiac sphincter (located between the esophagus and the stomach).
• When the cardiac sphincter fails we say we have 'heartburn". This is the acids burning the lining of our esophagus, not our heart.
• Figure 10.4 shows the stomach filled with chyme.

Digestion from Stomach to Small Intestine 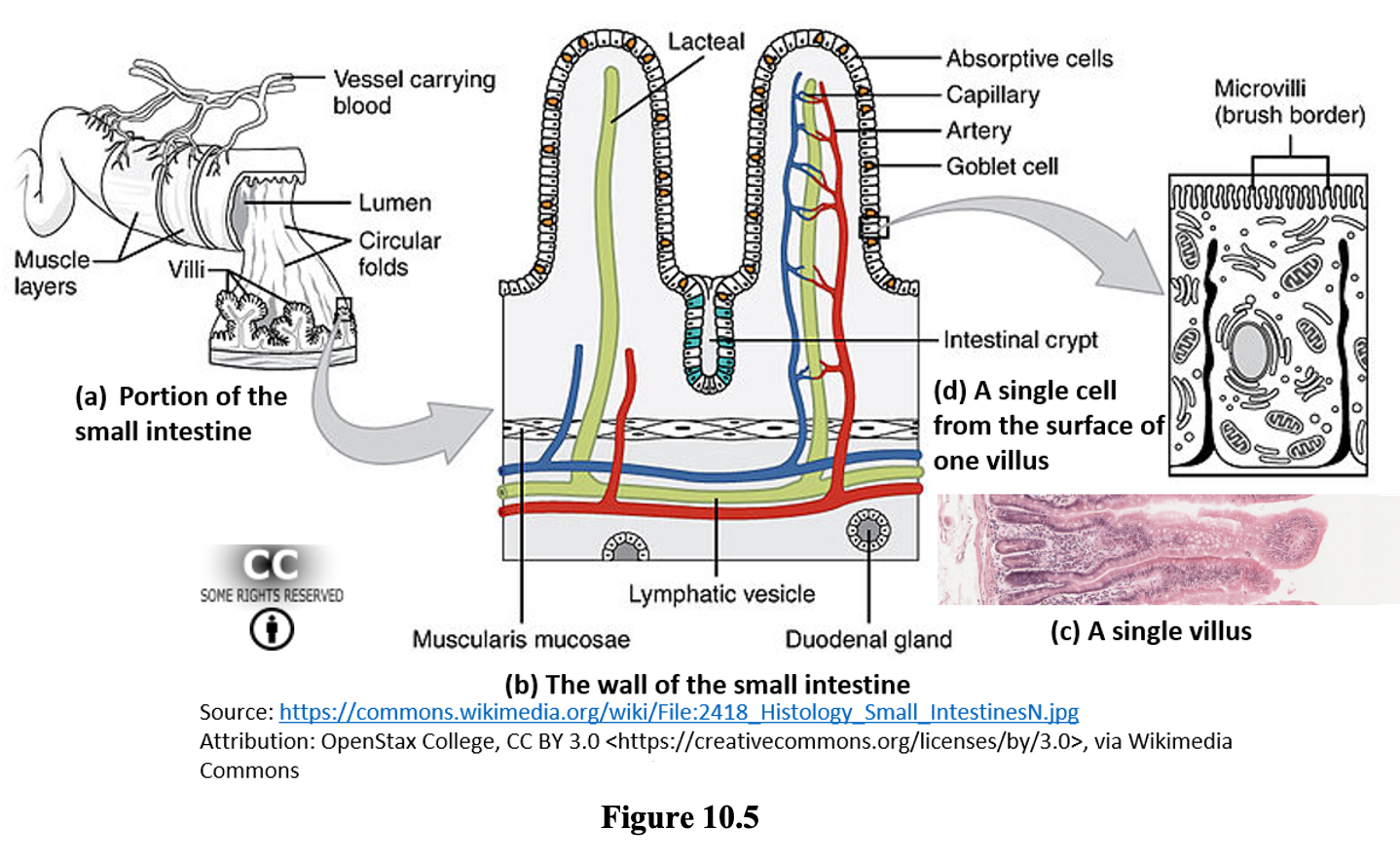 The Pancreas, Liver and Gallbladder

• The liver produces bile which is stored in the gallbladder.
• Bile is a mixture of bile salts and bicarbonate.
• Bile salts emulsify fat (that means they break fat down into smaller globules).
The pancreas secretes bicarbonate, to neutralize the acid from the stomach, and enzymes that aid in the digestion of fats.
• Both pancreatic secretions and bile enter the small intestines through the bile duct.

Digestion from Large Intestine to the Anus

• The large intestine, also called the colon, is about 5 feet of tubing in an adult human.
• All that remains of the chyme is indigestible material, water, bacteria, and a few other things that could not be absorbed.
• The large intestine's primary role is to store fecal material, absorb water from it and propel it to the rectum. 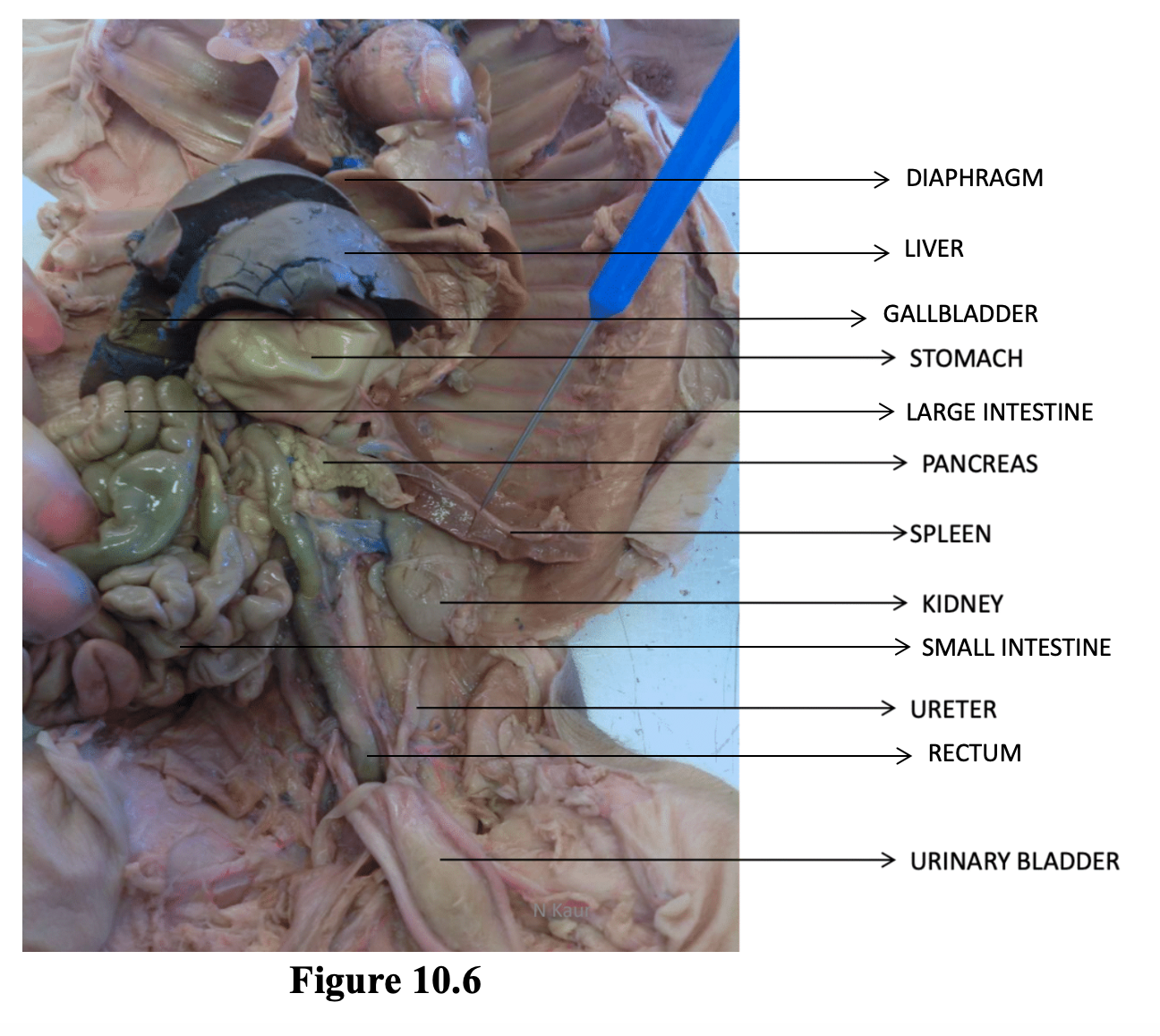 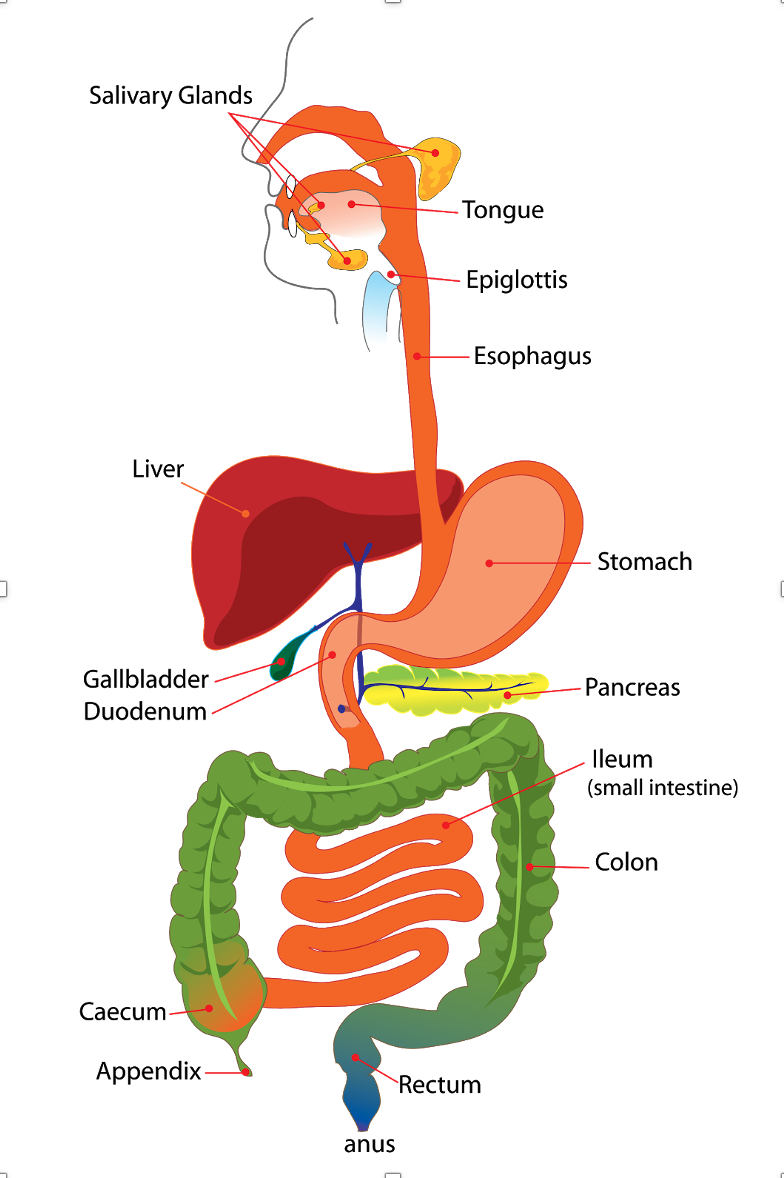